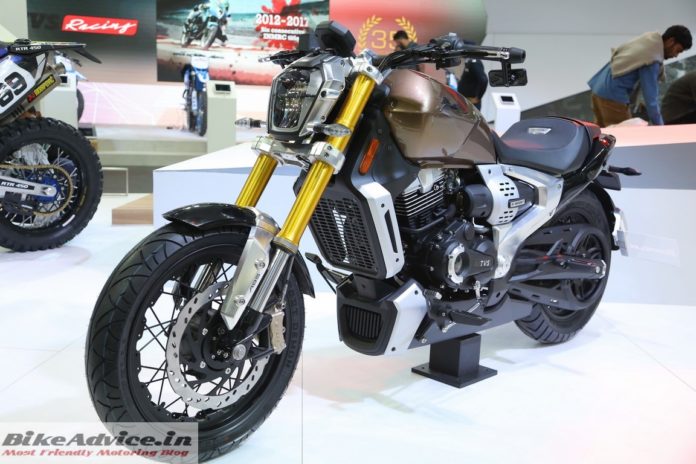 TVS Zepplin launch could be expected sometime next year as the company has patented two trademarks related to it recently….

TVS surprised everyone by unveiling a concept motorcycle at the 2018 Auto Expo called as Zeppelin. It was a cruiser bike and TVS cleared its intentions of venturing in this segment which is currently led by Royal Enfield in the premium spectrum and Bajaj at the entry level.

In a latest, TVS has applied for registration of a new brand name – Zepplin R. This comes after it got approval to use ‘Zepplin‘ earlier this year. That means that there may be more than one variant that the brand is looking to launch under this umbrella.

If you would have noticed, TVS has dropped an ‘e‘ from the name. Back at the 2018 Auto Expo, the concept was called as Zeppelin, however, may be due to non-availability or for simplification, the upcoming model is likely to be called as Zepplin (without an ‘e’).

The 2018 concept was powered by a new 220cc single cylinder engine along with features like Integrated Starter Generator (ISG), 41 mm fat upside down front forks, dual channel ABS and an all LED set-up. The belt-driven motorcycle also had segment first features like a smart Bio-key, HD action camera, etc.

It will be interesting to see how much of this actually percolates to the production motorcycle. But considering TVS’ current aggression we are set for a stonker of a debut in the cruiser segment.