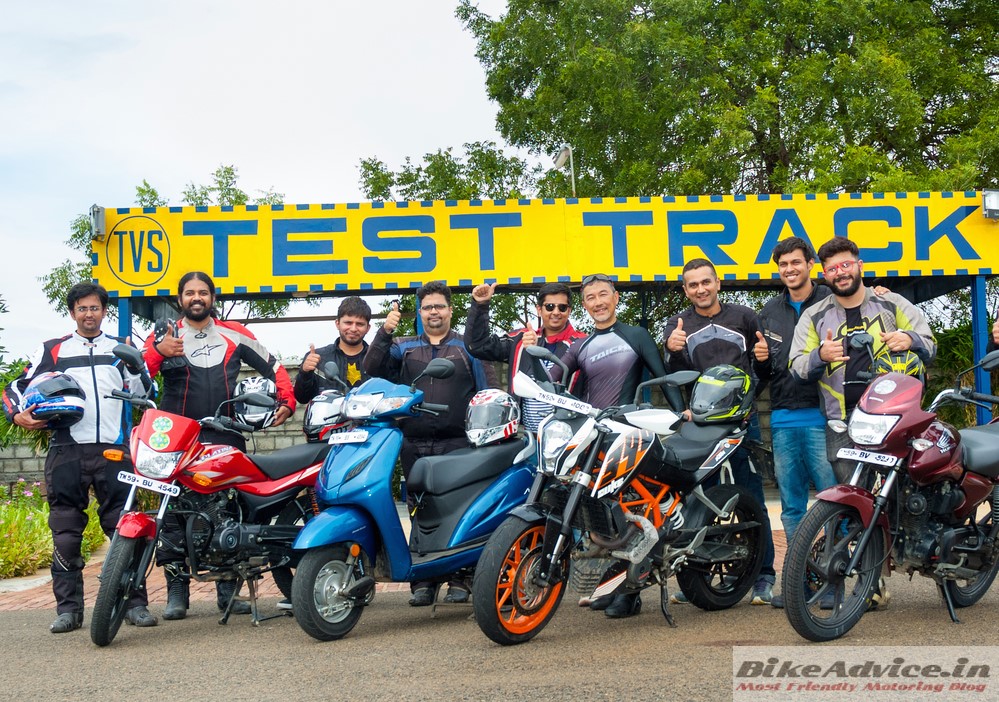 Did you know: Michelin tyres you ride your bike on are manufactured by TVS?

As an automobile journalist, I have been riding and testing motorcycles for many years – motorcycles of various genres and segments – big and small, but what I did not get a chance to do was individually test the most important part of a two-wheeler – the tyres.

Tyres are the only contact patch between the ground and your two-wheeler – this must tell you about what role are they loathed to play in a two-wheeler! TVS Tyres invited BikeAdvice for an event which was divided in two parts – one was the factory visit to let us know how tyres are made and the more interesting chapter was the tyre testing regime the next day.

Some quick but interesting bits about the company

TVS Srichakra is headed by P Vijayaraghavan who is the Director of the company. He is a Post Graduate in Chemistry and Post Graduate in Rubber Technology from IIT, Kharagpur. They makes tyres under the brands of

Eurogrip brand does not carry any TVS badging and was introduced for manufacturers which did not want to use ‘TVS’ branded tyres like Bajaj etc.

TVS tyres has an in-house R&D which was set-up in 1995 and is recognised by the Department of Science & Technology, Government of India. They also have cross-knowledge functions with overseas teams for guidance and ideas. All the tyres are put to in-depth field evaluations and they also have their own test track in Madurai. Tyres are tested on real roads, test track and some high performance tyres are also sent to Japan for further tests. 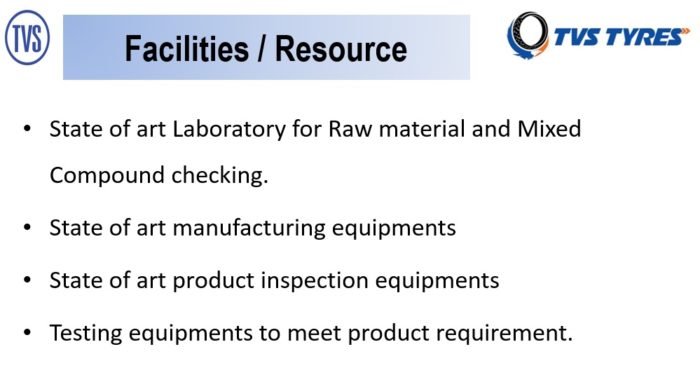 They have set up well-equipped labs which can reveal the smallest ingredients of the composition of any tyre (from any manufacturer). Apart from benchmarking, it can be used for studying new rival-tyre manufacturers’ tyres and based on their findings they have the capability to develop or better their own products. They have dedicated high-speed rollers where tyres are run continuously for hours/days/weeks to understand their high-speed behaviour. 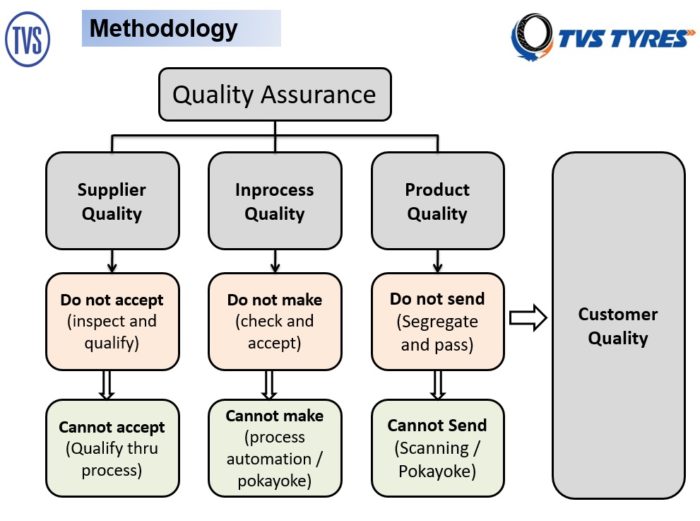 Fun fact: You will be startled to know (at least I was) that one of the roller machine was testing tyres at speeds of over 400 kmph!

Apart from this they have test riders who physically test tyres continuously every day for 400-500 kms! Safety gear offered to them is of the highest quality we have seen – airbag equipped riding jackets and Arai helmets. We were also told that they change this gear every year! 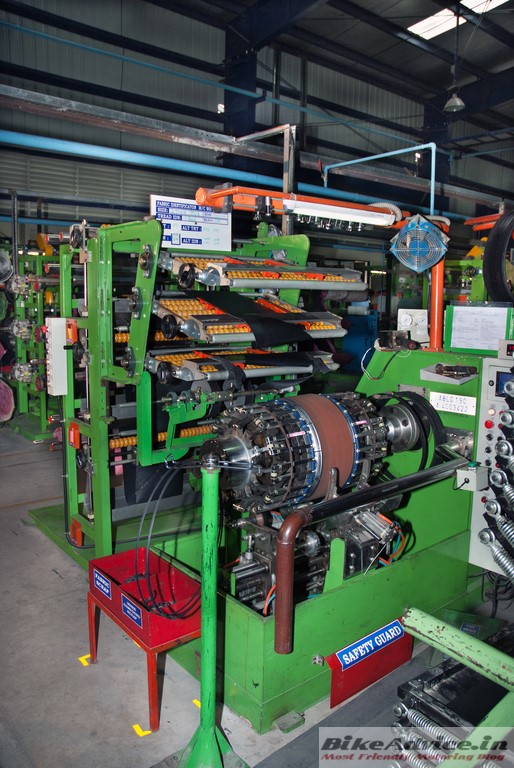 In the off-highway segment, TVS has recently launched rear radial tyres for tractors in Europe which have been received well.

Fun fact: Those rubber spikes that you see on brand new tyres are created by excess air that pushes out from the pores of the mould in which a tyre is shaped. There is a dedicated section of staff which shaves these off. 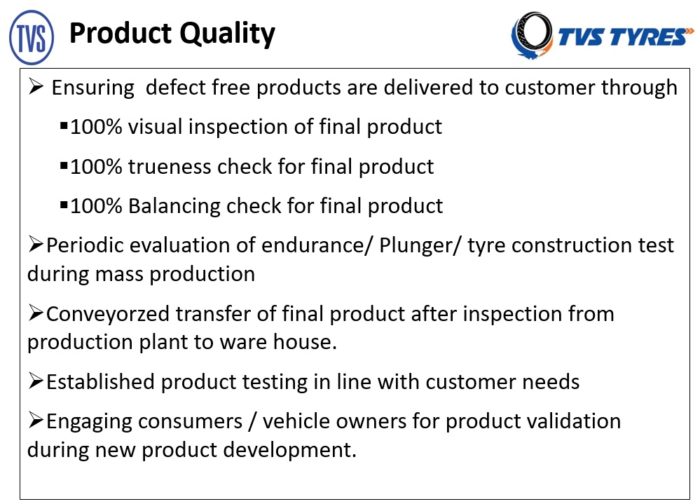 TVS maintains the highest order of quality management systems and they have certifications from various agencies. They conduct periodic internal audits to ensure that systems are being complied to.

On the second day of our visit in Madurai, we were scheduled to test tyres and we were greeted by Mr Hide Okamoto.

Hide Okamoto has been a professional racer and a test rider for the last 33 years. He has ridden and tested scooters and motorcycles from puny 100 cc to the large liter class ones and the actual racing machines. Some of his accomplishments are..

TVS has hired him as their riding expert who tests tyres for them. Mr Okamoto comes across as a very knowledgeable person and a true motorcyclist. He taught us the small intricacies of tyre testing.

He started off by giving us a small theory session which involved a lot of science, but more important were the learnings he passed on at the track. To start with, it was not a full blown race track where we needed to do 150 km/h on tight bends, nor were we supposed to push our limits.

At our disposal were four machines – humble Honda Activa, Bajaj Platina commuter, Honda Shine and the most interesting Duke 390 old-gen – all shod with TVS tyres. Mr Hide taught us how making a simple but tight ‘8’ (the number eight) effortlessly can make us learn the basics of tyre testing.

We had our run one by one on all the machines, at a very slow pace. Mr Okamoto discussed how each motorcycle handled, and what role does a tyre play in that. There were so many learnings but one big constraint – time! We grasped whatever we could before packing up and moving to our destinations.

But it was heartening to see how a tyre manufacturer was enabling us to better the understanding of our own profession. We have been promised more such sessions and let me admit – more than any media test ride so far, this was the most enlightening event that I have been a part of.

It is really commendable that TVS Tyres – a home grown manufacturer is taking India on a global map. They are becoming very aggressive and have rapid expansion plans in India as well as the international markets. From basic tube-type and tubeless tyres, they are now producing radial tyres for bigger motorcycles. As we have revealed earlier, they will be launching motorcycle tyres for Dominar 400 and Duke 390 soon.