While a whole bunch (called the majority) of people still prefer to buy the age old traditional technology laden 100cc Splendors, the demand for better technological stuff has risen by leaps and bounds in the country of late. Fuel Injection, Delta Frames, Disc Brakes, Digital gizmos all form an integral part of a young man’s desire these days. Many companies have been trying to take this initiative of upgrading an average Indian consumers mind, Bajaj and TVS form the top two among them! TVS has a racing division because of which the end products we receive on road are technical marvels as they go through the toughest of terrains under the harshest of conditions to be fine tuned for commercial production. TVS has always been a major player in the market and has this uncanny knack of pulling out something which surprises everyone. 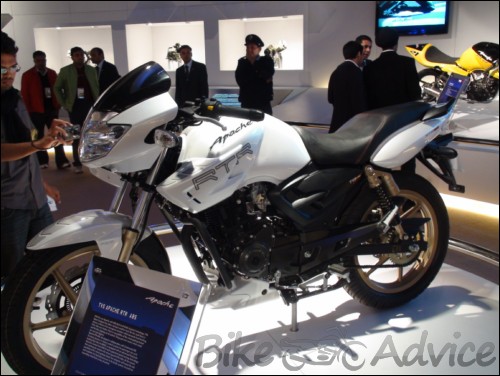 TVS already has one of the finest motorcycles in India in the form of Apache RTR 180 which is not only one of the fastest in production but also upholds the tag of being the best stopper among all the machines produced in India. The major attribute goes to the petal disc concept followed by the company. And if you feel good about the facts above, you might jump off your chair when you would come to know that TVS is planning to install Antilock Braking System (ABS) on their bikes. TVS showcased their prowess at the recently concluded Auto Expo, where they had an Apache on display loaded with ABS.

ABS: The bike loaded with ABS consists of a sophisticated Hydraulic Electronic Control Unit (HECU) and speed sensors which continuously keep a track of the speed of the wheel. As soon as it senses a bleak possibility of a wheel lock, the control unit alters the hydraulic pressure in the braking system which doesn’t allow the wheel to lock up and hence, the rider doesn’t lose control of the bike. 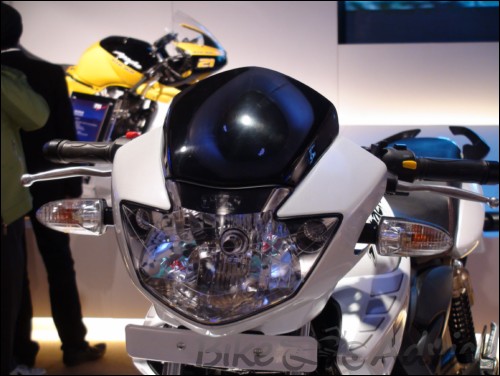 RLP: In addition to the standard ABS functionality, TVS also has loaded it with RLP which stands for Rear Wheel lift-off Protection. As the name suggests this system doesn’t let the rear wheel to go air borne in case of an emergency braking. As soon as the unit senses the rear wheel lifting off the tarmac, the front brake pressure is released for an instant which ensures that the bike is safely grounded at all times.

TVS has developed this technology in collaboration with a German based firm, Continental AG who are pioneers in chassis control systems and passenger cars along with some big names from the two wheeler bike manufacturers like the BMWs. ABS helps even amateur rider to be in control of things even under immediate braking. The best utility of ABS is witnessed in wet roads where the bike performs much safer.

For stunters, there is absolutely no need to worry as the device can be turned off manually. According to our reports, this device would find way into production in the later part of this year and would set you “forward” by an increment of around 7-8 grands over the bikes cost. Once we Indians understand the use of such safety enhancing technologies, we might find these 7-8ks cheaper than what they might be looking currently. Considering the fact that Indian roads are the most prone to hard braking (under the influence of cow dungs, cows themselves, sand, oil, people etc) this device would be an ideal companion and might be the difference between a hard life threatening crash and a narrow escape!