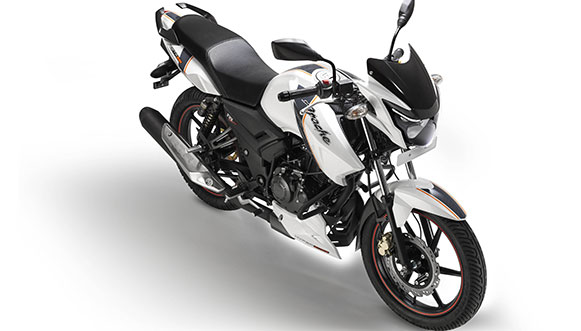 The bells have started tolling, and conchs will probably start blowing in a few days time. Children will scamper hither and tither shouting in their shrill voices, and womenfolk of the houses will scurry around with sweetmeat-laden trays. But what will the menfolk do??

Menfolk have a job too, that of treating themselves to the sight of facelifted editions of two-wheelers that have been crowding the landscape of late. Some of them might treat themselves to a new set of wheels!! 😉

After Hero MotoCorp hogged the limelights with its updated Karizma twins along with the new Hero Xtreme, TVS has decided to get into the fray. To make a killing out the spending frenzy that Indians go on in the festive season, they have launched new paint schemes for two of their mainstay models – Apache RTR 160 and Phoenix 125.

The new editions will be available at all the TVS showrooms across the vast expanse of India. The Apache RTR 160 gets the white paint scheme (Pictured Above) which was exclusive to its 180cc sibling. It is now available in as many as five single color tones.

In addition, TVS has also introduced a new dual-tone paint scheme for its Phoenix 125. It is termed as the Alpine White color scheme, and features White as the base paint and Red as the color that adorns the decals. This paint scheme is exclusive to the Phoenix 125.

Both the bikes remain unchanged in terms of mechanical specifications. But do you feel an exterior skin change will be able to provide a fillip to the sales of both these models?

If we have to pen down our opinion, we have always liked the color ‘white’. And these designs appear to be good lookers from the official studio shots we have here.