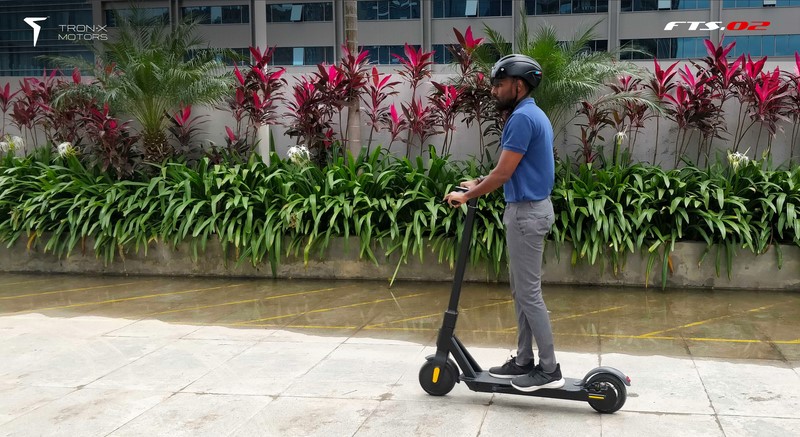 TronX FTS.02 price is yet to be revealed. This e-scoot has a top speed of 25 kmph and is a nice, tiny-little option for colleges, campuses etc…

Hyderabad based start-up TronX Motors in collaboration with Freego Global has launched India’s first official scooter for sharing mobility – FTS.02. This scooter will be first of its kind which will be focused for the micro-mobility sector.

Founded in 2015 TronX Motors was earlier known as Volta Motors and works in the design and development of advanced electric vehicles. As part of TronX portfolio, the company also launched India’s first Smart Crossover E-bike – TronX One back in 2018. Speaking about company’s expansion, Anoop Nishant, Founder and CEO, TronX Motors, said:

The electric scooter, FTS.02 is powered by a swappable, IPS67 rated 250W battery pack. TronX informs FTS.02 has a top speed of 25 km/h and a range of upto 40 Km in a single charge. It can get fully charged in 4-6 hours and can take maximum weight of 200 kg.

The company has exclusively designed this scooter aiming B2B – teck parks, college campuses etc. The electric scooter features LED light at the front, a stop indicator at the back and reflectors on either side of the wheels. FTS.02 is built with a sturdy V neck design, a wider footboard and disk bakes at the rear which is best suited for Indian ride conditions in campuses.

What Happens if You DO NOT Pay Revolt’s Instalment?

TronX Motors aims to provide scooters for rentals and intends to enable scooter sharing by using QR code which will be placed on the handlebar. This QR code will be used to unlock and use the scooter.

Next Revolt to be a CAFE Racer: Render Image Emerges [Update]

The scooter will be available in single black colour. The launch and pricing details are yet to be revealed by the company.