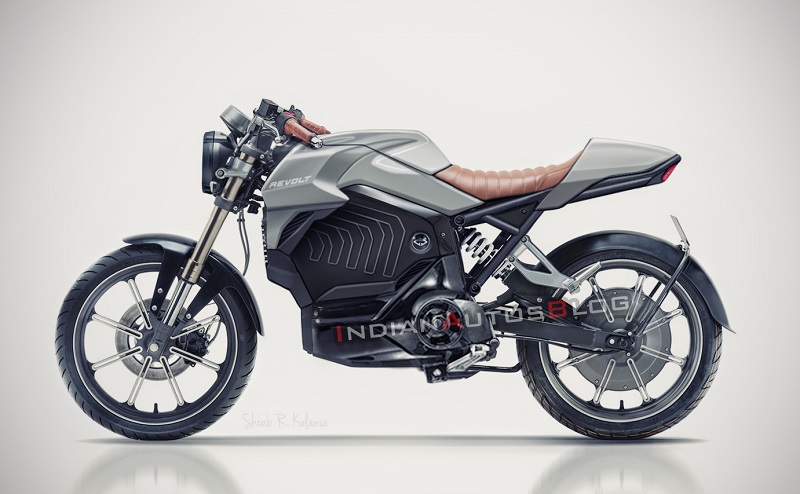 India based new electric motorcycle company Revolt Intellicorp is finally set to storm the domestic market with two products – RV400 and RV300. We have discussed about them here and here. But that’s not all. At the same launch event, Revolt left everyone curious by teasing its next offering – a café racer-styled electric motorcycle.

With the retro-styled bodywork, the bike seems to be inspired from the cafe racers of yesteryears. India currently only has RE Continental GT 650 as the (relatively) affordable cafe racer on sale. This upcoming motorcycle is expected to become the flagship model for Revolt.

It is expected to sport a round all LED headlamp with low slung clip on handlebar which will bring in an aggressive riding flavor to the motorcycle. This Cafe racer bike is styled with single-piece ribbed cushioning seat, tail cowl and a tyre hugger; which also means that it may be offered as a single seater as standard.

In terms of suspension according to the teaser image, it will be equipped with upside down forks at the front and a mono-shock at the rear.

While the brand hasn’t revealed any details about the bike, we could expect the model to be a premium motorcycle for the niche segment rather than a mass market offering. Also, considering its sporty looks, a larger capacity, more powerful motor could be on offer as well.

In an update, Indianautosblog has posted a speculative rendering (featured image of this story) of how the motorcycle could look like which is inspired by the teaser image the company shared.

Revolt seems to be in a hurry to make a mark in the newly created electric motorcycle segment before the mainstream players like Bajaj, Hero and others join the race. Hence, this yet-to-be-named cafe racer could be launched sometime next year. As we mentioned, it is expected to be positioned above the RV400 in terms of price and may continue following the monthly instalment scheme which Revolt calls as ‘My Revolt Plan’.