There has been a lot of interest and confusion about Triumph Motorcycles India. And why not, considering they have some real beautiful monsters in the lineup. 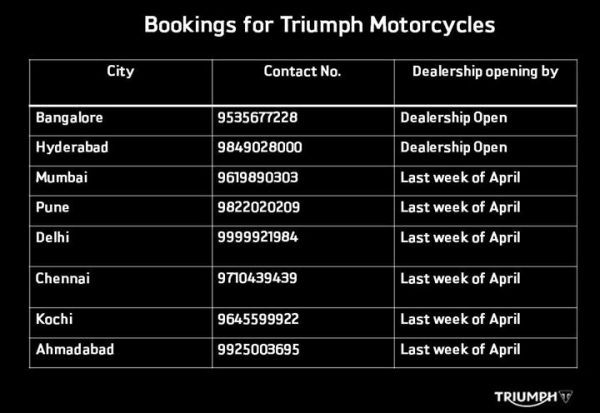 The confusion is with regards to the point of contacts at major cities of India where Triumph has announced dealerships but is still awaiting launching them. To clear it up, the company has shared the contact list of their 8 dealerships – existing & upcoming, in India.

The Brits first showcased their products at the 2012 Auto Expo and finally last year in November they held their grand unveiling in New Delhi. The first two showrooms at Bangalore and Hyderabad have been operational for some time now and as per their business strategy, they were aiming to be in 7 cities by end of April 2014 and 9 by end of May 2014. 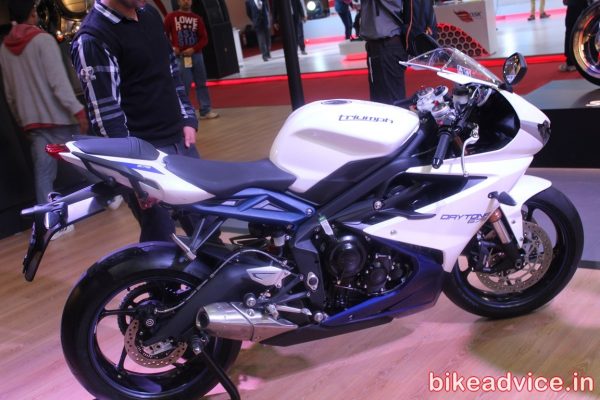 And this time Triumph wants to deliver its promises even though it has not been exactly on schedule so far. They are coming up with not 7 but 8 cities by the end of April 2014 according to the pic you see here.

All you Triumph motorcycle lovers in Mumbai, Pune, Delhi, Chennai, Kochi and Ahmedabad can now call on the numbers provided and get all the information you need for booking and owing one of them. But remember these numbers are operational between 10AM to 6PM on all weekdays only.

This announcement comes after they had put up teaser posts on their Facebook page about upcoming showrooms in Delhi, Chennai and Ahmedabad earlier in March and a teaser for Kochi sometime towards the end of February. However, there is no intimation about their Kolkata outlet yet.

Apart from their current lineup which starts with classic Bonneville, Triumph has plans to go down the ladder and launch 250cc Sports Daytona as well as Naked Single.