I have rarely found a youngster who has not got the passion for speed! Speed is the only need that can lead you in all senses! Here are some of my tips that I have gathered, of course, from my personal experiences. To attain this high speed, you either have to take your Indian Super Bike to its highest performance level or you need to own a Foreign Super Bike. With Indian bikes this becomes a challenge as you have to concentrate on handling the bike judiciously, at the same time concentrating on the roads and traffic flow. But take it from me, it is a fun! BUT there are few things you need to consider before you kick your bike! 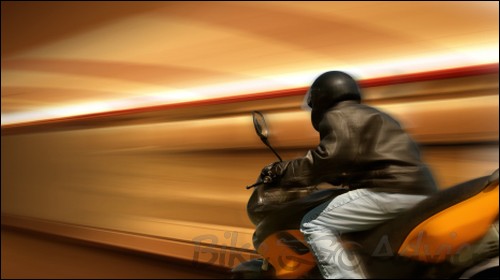 Do you really need to speed up your bike? Speeding up a bike unnecessarily is really a wrong thing. But I would recommend that you practice speed riding in pleasurable conditions, as it may help you in extreme situations where you have no other option than to speed up… After all, one of the purposes of having a bike is ride fast as well… If you are not used to speed biking, then chances are very less that you could drive a bike in a pressured situation safely.

Riding Within Limitations: You should also know the physical limitations of your bike, because the behavior of simple Indian bikes change dramatically when they cross a particular speed! Eg. A Splendour is a very nice bike at low speeds but if you try to push it beyond 70-80 kmph, the engine will start giving out tremendous vibrations which will warn the rider to cool down! I have ridden a Splendour at the top speed of 90 kmph (7.2 bhp version) I have also touched 100 kmph using Hero Honda Dawn which has got a similar engine as the old Splendour, with slightly higher torque. (7.4 bhp). But you certainly feel uncomfortable at these speeds, on these bikes. Tip: whenever you feel that your bike is uncomfortable… Cool down immediately… you never know what it may lead to.

New Bikes: Speeding up even for just a while, may severely damage your bike engine for ever. Especially I would like to tell this to new bike owners. They buy new bikes and start using them at high performance levels. This is not how a new bike is handled.

When the engine is new, the friction between engine parts is also at the maximum. For the initial 1,000 – 1,500 Kms. the bike should be driven at slow speeds. I remember my own 1st Hero Honda bike which was expected to give me average of 60-70 kmpl. But because of my rude riding habits from the 1st day, it still gives me 35-40 kmpl, even after 7 years! Never make this mistake! Tip: Don’t hurry please, if you own a brand new bike.

There are many factors that affect the speed of your bike directly or indirectly.

Classifying Speed: By saying Ultra High speed, I am referring to the speeds when the optimum performance of your bike is tested

Road Conditions: Road conditions carries a weightage of more than 50% in your speed riding as you have to drive all the way on the road itself! Unfortunately, we have very few roads in India, which are long, straight, smooth and hassle free enough to have a nice long speedy ride. The best road could have been the express way from Mumbai to Pune, but 2 wheelers are not permitted. 🙁

Required Conditions: While riding, if following conditions are met, you are free to test your high speed riding skills. Tip: If any one is missing from this list, skip the chance of a high speed ride!

Now here you go! Gear your bike down to lower gears. Try to attain the maximum speed of every single gear. E.g. On 1st gear itself, reach 30-40 kmph, 2nd gear 60 kmph, and so on. This will help your bike attain ultra high speed easily.

Avoiding a Crash: There are two ways of avoiding a potential crash – Fly or Fight. Fly method tells you to break down the speed rapidly and come out of the scene or stop the motion totally. Fight mechanism tells you to increase the speed and escape ahead of the scene.

Fight mechanism is easier to handle. Using brakes properly is a skill, and you are also unaware of things moving behind you. So as far as possible, go for speeding up ahead.
Use half clutch technique that theoretically doubles your engine speed and practically too, adds torque, which helps you escape.

Half Clutch Technique: While the throttle is open, half press the clutch and release it instantaneously, this will disengage the drive for some time. The engine having no load, will start moving at a higher rate, at the same time releasing the clutch will engage it with the engine drive that is having higher number of rotations! This will definitely give a jerk to your bike. But frequent use of this technique will result in to enormous wear and tear of your clutch plates and also it may affect engine efficiency. So use this technique only as a life saver tip. Not every day! Tips:

Interesting fact: When you travel at a speed of 60 kmph, your body travels at a rate of 80 feet per second! So imagine, if you fall off a bike at a speed of 60 kmph , you will be rubbed on the hard tar road surface for 80 feet in a second! Always keep this math in your head and then drive judiciously and safely!

I own a Custom chopper that weighs 275 Kg! I have attained a speed of 140-150 kmph several times on it! I have never ever had a single accident at high speeds as I have always obeyed all the above tips or Laws of Speed Riding strictly. After all we are doing high speed riding for our joy, so we must make sure that we bring only JOY out of it! So just keep all these things in mind and Kick your Bike! Happy Speeding!

Thanks and regards,
Prashant Kulkarni

P.S. Remember that You are 100% responsible for your safety!