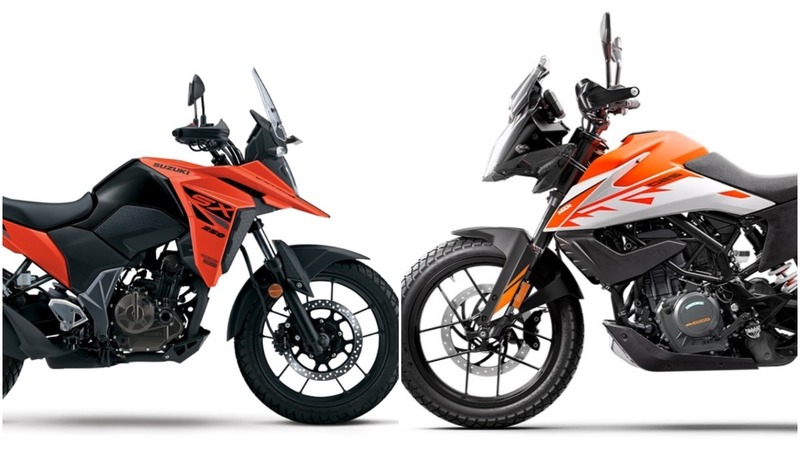 V-Strom 250 vs 250 Adventure – We pit the two new quarter liter Adventure tourers in an on-paper comparo to see which one is better. Let’s quickly jump in..

With the surprise launch of the quarter liter ADV V-Strom 250 SX from Suzuki, rivalry has gotten hotter in this space. The king of the segment, so far, has been the KTM’s 250 Adventure.

So, how does the Suzuki stand up against the Austrian? Let’s go ahead with a spec comparo…

We can see here that the KTM 250 Adventure is clearly more powerful and has more torque than the V-Strom 250 SX. So, on paper (and most probably in the real world as well) the KTM’s engine may have better performance but we have seen that the Gixxer’s motor is slightly more tractable and better in the low and mid range – a trait so dearly needed in ADVs.

The KTM can carry 2.5 L more fuel than the Suzuki’s baby ADV. Another part where the 250 Adventure scores is in the clutch department.

Most pointers go in favor of KTM in this round. Let’s move on…

Again, on paper, the KTM is looking better than the Suzuki when it comes to the suspension setup. The WP Apex suspension is KTM’s best setup which is used on their race machines as well the bigger motorcycles, whereas Suzuki appears to be utilizing the standard setup on the V-Strom 250 SX.

However, we have seen Suzuki acing up its mechanicals with no high-sounding names. Only a real world test, back to back, will reveal how these two ADVs perform on (and off) the terrain.

We should spell out that the front travel suspension (a much needed trait for off-roading) of the V-Strom 250 is disappointing but it makes up, somewhat, for that with an impressive ground clearance which is slightly more than even the KTM.

Another area where the V-Strom aces is the relatively lower seat height of 835 mm which should make it more accessible for most Indian riders. It also has a slightly longer wheelbase.

The KTM fights back with an 11 kilos lighter weight.

The tyre profiles of both the 250 cc ADVs are very similar. Both the bikes get dual-purpose rubber covering the spoked-like alloys on and KTM trademark alloys on the 250 Adventure. The V-Strom comes shod with a slightly wider rear tyre which may offer better grip and control in real-world conditions.

Surprisingly, the V-Strom 250 SX has an upper hand over 250 Adventure in terms of the feature department.

It gets all-LED lighting, full-digital instrumentation which gets Bluetooth connectivity through Suzuki Ride Connect app. The Ride Connect app provides various smartphone features to the rider along with turn-by-turn navigation.

This price difference of over Rs 20,000 is crucial. This also makes the V-Strom, with Suzuki’s known reliability, a more accessible motorcycle out of the two. With packed features such as turn-by-turn navigation and that tractable engine, it appears to be a more value for money product to us.

Also read – BSA GoldStar vs RE Interceptor: Battle of the Retro 650s [COMPARO]

But, these are just some numbers on paper. To really understand and specify which of these two is actually better, we have to get our hands on these machines and ride them back-to-back. It will be a very interesting fight between these two and a hard-to-make choice definitely!