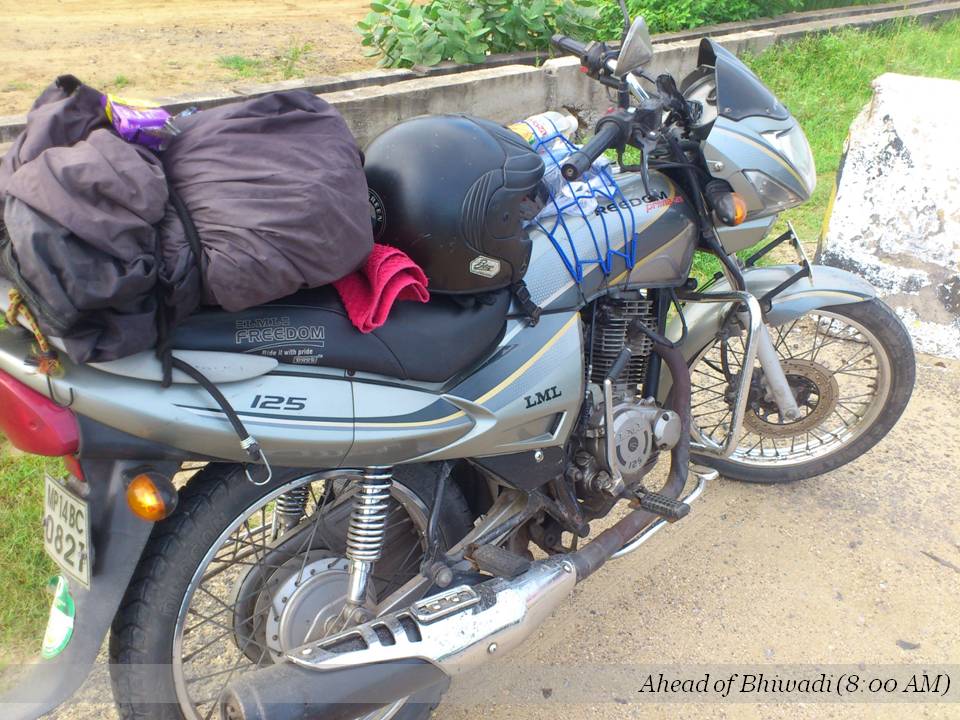 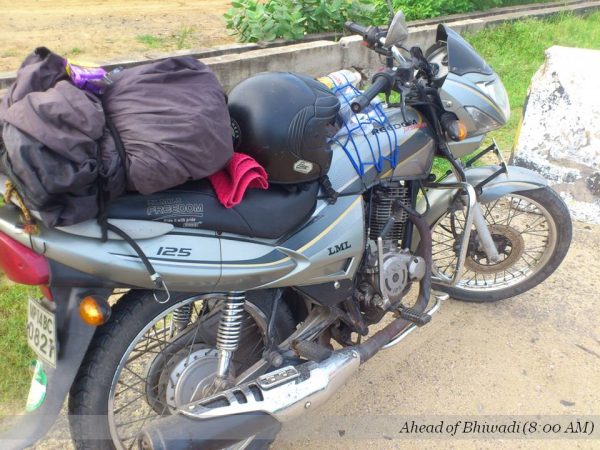 I am Shashwat and the article here is about the final goodbye to my first motorbike. No matter how good and advanced vehicles we buy later in the life but the first motorbike always holds its charm throughout our life. I never thought, when I bought this not so popular vehicle, LML Freedom Prima 125, that the story would last this long and that too on such a good note. Mentioned in my previous review (Read Here), the story of meeting my first love on 12th July 2004 and unclear future plans for the most reliable machine I have ever come across.

A month ago, I bought a new popular motorbike and hence it was time to say goodbye to my Freedom, as it was not so easy to watch her deteriorating in rains and also, sooner or later, the bike had to be sold. The Brain and Heart settled on an agreement that OK, sell out your 9 year old companion, but make the goodbye as big as possible. Due to NOC & Registration issues, the bike was bound to be sold in hometown (Mandsaur, Madhya Pradesh) and could not be sold in Delhi NCR or elsewhere. I decided to ride the bike back home. 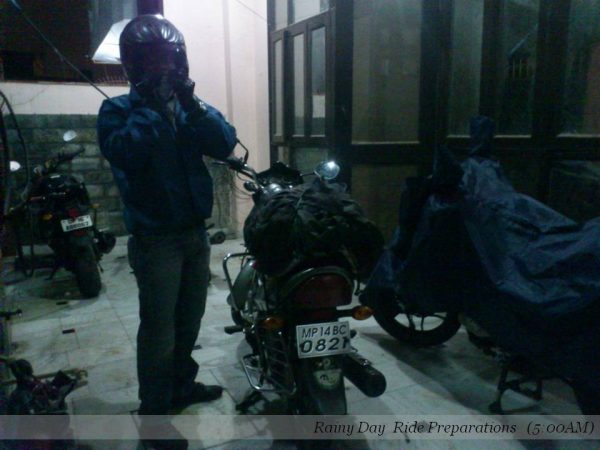 I was pretty excited for the first though; travelling on a bike had never been an ache. I always wish to ride a bike on endless roads. Also, when the destination is “home”, the care to tiredness caused is well treated. Reading reviews of few solo riders doing more than 600 kms in a day helped. But to my disappointment, I could not find any review on kms done on an old and less than 150cc bike, which were the main worries.

I relied on all the time I devoted on the bike maintenance, all these years, with religiously following the bike service scheduled at every 2000kms with Oil and Oil filter being replaced. During the last service about a month prior to the trip, mechanic told about the chain socket needed to be replaced. Somehow I was not convinced with his recommendations and I decided to hold the replacement for then, irrespective of the decision on taking the bike for trip. It was the first time I had deprived my sweetheart, from any part being required to replace. Although it added to the uncertainty of bike being reliable throughout the trip. 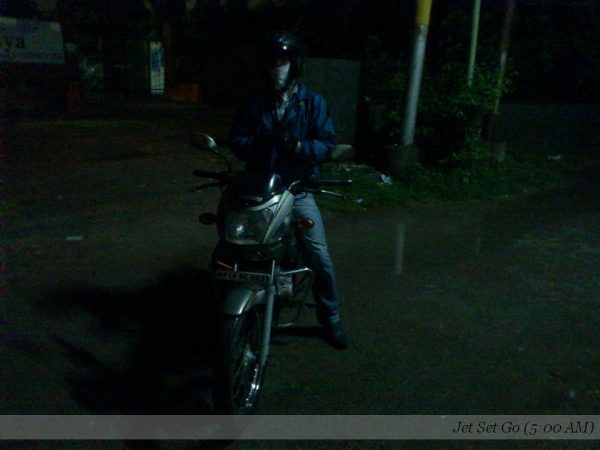 The 125 CC engine, with little oil leaking at few joints (yea, not able to rectify as could not find a good mechanic) was on the worry list as engine was going to be revolved continuously throughout the day. The problem was dealt by preparation of a travel plan, with a “10 mins stop for per hour run” strategy. The estimated trip time came out to be 17 hours maximum. The plan of completing the journey in two days (with night halt after first 450 kms) was dissolved and new plan of 17 hours ride was finalized. 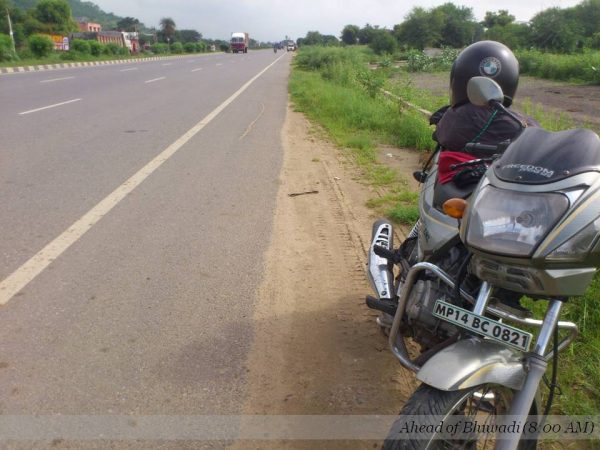 The holidays are to be clubbed with weekends in order to keep some buffer time in case of engine break down, or any other unexpected incident. The Independence day of 2013 seemed perfect for the Freedom to start the journey. The preparations started, Applied for leave in office, got minor repair work done for odometer, Cancelled Train Tickets, Informed well wishers about the whereabouts of medical cards in case of emergency, Packed bag and checked tying it a day prior leaving, lastly and most exciting, informing family members that I won’t be able to come home this Rakhi festival. 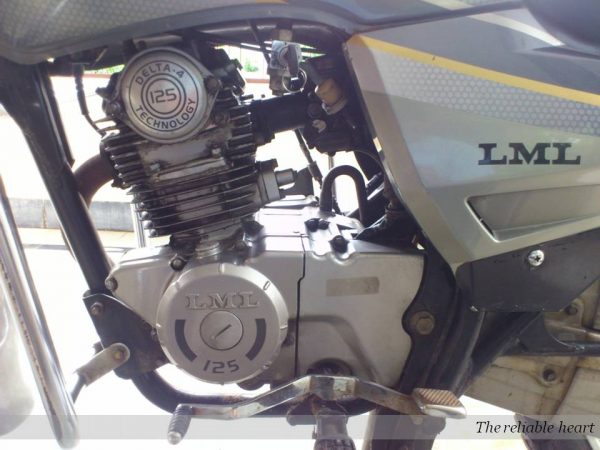 The rainy season was an add on to the pleasure of ride but the rains were a problem as well. Due to shortage of time, shopping for proper riding gears was not possible. I decided to put on a Windcheater and use my already owned riding gloves. In the absence of saddle bag, I decided to tie the bag pack on rear seat and cover it with the motorbike body cover. Thanks to my housemate, who lent me bungee ropes and helping me tying bag. 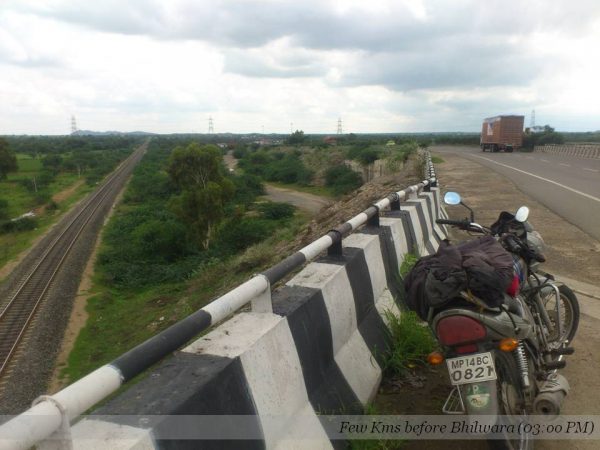 He, however, stated “Freedom engine is cast iron, it’s a problem as it heats up too fast and cools down too. Freedom is not meant for long rides.” Well, I know, no one shall ever believe me but I heard my bike whispering me, back on this statement “He might be true, but he is going to be proved wrong.” This gave me further strength and excitement we are going to have a lot of fun.

The last working hour at office ticked and I rushed home, determined to sleep early in order get up at 3.30AM and start journey by 4.30AM (half an hour prior to my schedule). Suddenly, program changed and an old friend called me up and informed about his arrival in Delhi. Attended him and went off around 11.30 pm. As I got up in the morning at 3.30, it was raining. 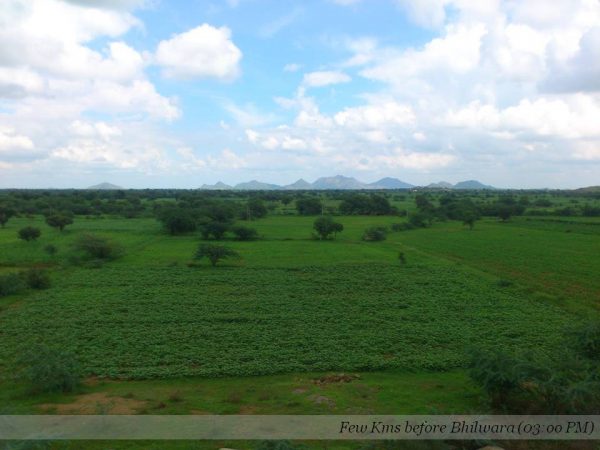 Luckily, by the time I tied my bag, the rain stopped. I soon Left my place in Noida at 5AM after a short photo session. The roads were wet and it was dark, I rode with a little nervous mind and relatively fast beating heart. Independence day gifted many police check posts on Outer Ring Road of Delhi, which took a while.

Stopping at fuel station for a fuel tank took longer than expected. The first break was expected after completing one hour ride, crossing Gurgaon. The dawn broke as I approached Gurgaon. I Could not figure out when I crossed Gurgaon & even Manesar for that matter. My checklist of estimated vs actual time taken, remained in my pocket and I did not wish to stop, take it out and mark the time. 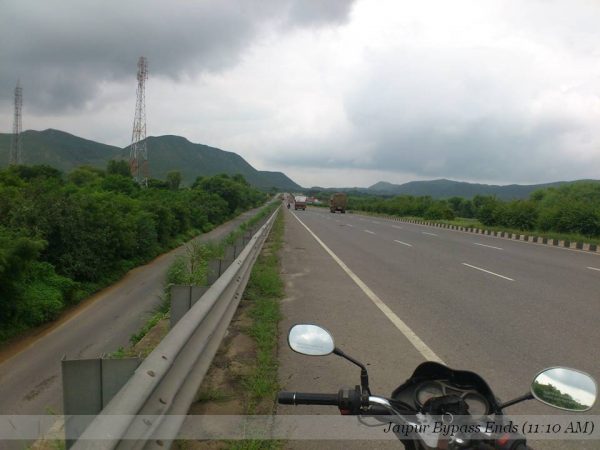 From Past rides, I have experienced that the first 200 kms are always the toughest as you tend to stop more frequently. The hazed highway to Jaipur, leaving droplets on the visor on helmet, made me stop more frequently than scheduled. However, my aim was to cross Jaipur as soon as possible. Few Pro-bikers on Honda CBR 250, Pulsar 220 were seen cruising at high speed for fun, reminded me of my new ride I bought a month ago, but also the fact that no matter what, this Independence day ride belongs to my Freedom.

Another fellow rider on a Yamaha FZ registered to Delhi number, was noticed till Jaipur. I declined the thought of teaming up as I prefer riding alone.

The bike did not cross 70kmph anywhere as I was worried about the chain socket and overheating of engine but maintained a regular speed of 60kmph. Short Stops of accurately 5 mins were enough for a quick bite (biscuits only), few photographs and engine cool down. Jaipur was crossed around 11AM, and stopped around 35 mins for a brunch at 11:30AM on the highway. 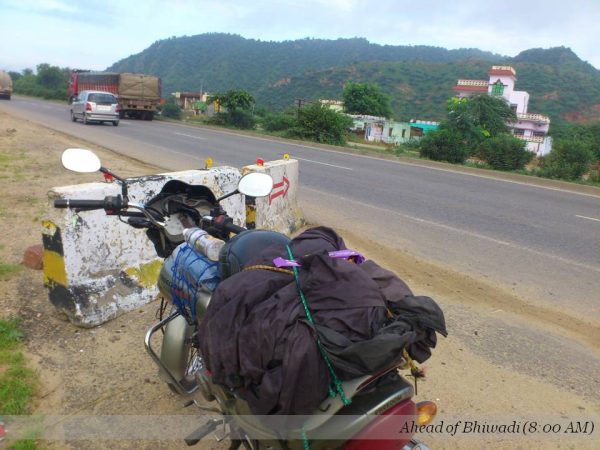 The next landmark was crossing Kishangarh which was crossed by 12:45 PM. By now I had met the rains twice and shoes were wet but the jeans got dried on its own. Suddenly the bike engine stopped and left me very disappointed. The old electrical wiring of bike clubbed with heavy rains many times causes the ignition switch to dysfunction. I removed the ignition wiring connection and stopped the bike for a longer duration of 10 mins.

However, I later realized that it was just the reserve indication, which stopped the bike. The bike tank got fuel again up to the brim, 50 kms before Bhilwara in Rajasthan. As I proceeded, the frequency of stops reduced from every 50 kms to 100 and upto 120 kms, due to ever increasing pleasure of ride and excitement of reaching home. 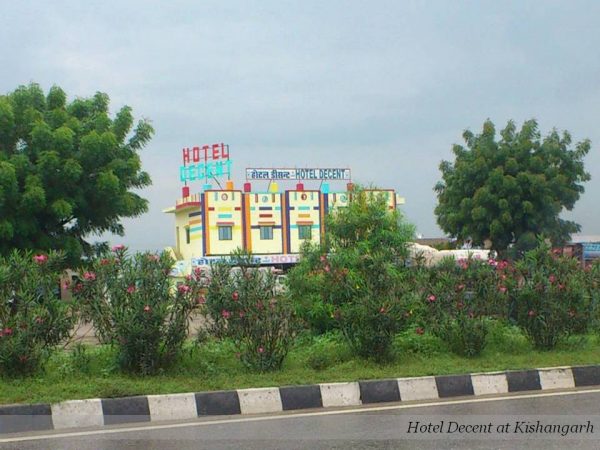 I touched Chittorgarh at 5.30PM around one and a half hour prior to my scheduled time. A slightly longer halt to prepare for the last 115 kms of the most awaited ride. A mixed feeling of happiness (for running before schedule and close to finishing the trip successfully), and nostalgia (for the last 100 kms ride on my Freedom) was occupying my mind.

Called up the friend to inform about my location and headed off to home. Around 25 kms section of pathetic roads with many trucks lined up took almost an hour. Nevertheless, the lot of dust and mud covering bike, helmet visor, windcheater and gloves, a quicker ride on good 4 Lane Road till the hometown helped my reach my home at 8:40PM. 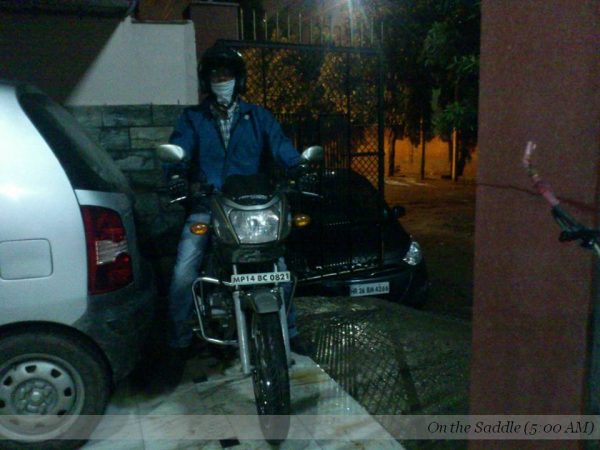 Taking the longest route possible to reach home within city, me and Freedom celebrated the end of our most memorable ride. I stepped in to home with mobile on video recording mode to capture and realize that nothing in the world brings more happiness to the family members, other than unexpectedly seeing you right at the door of the HOME!

A good cleaning of bike on the next day only to leave her home, for sale, was done by me, as I always used to and clicked few last photographs of her just to keep the memories of her last glimpse. 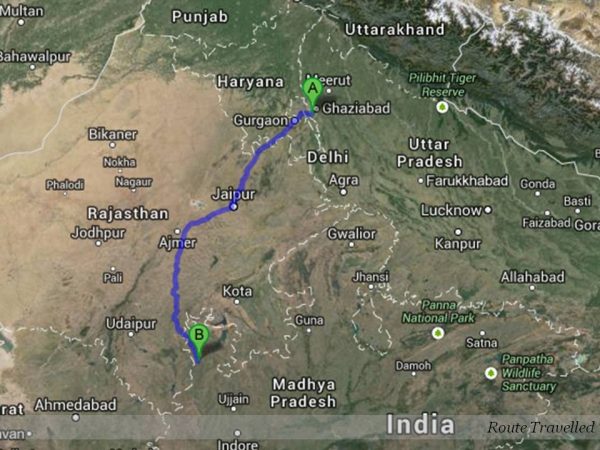 I have never crossed the 2000 kms mark for servicing of the bike and never left the bike to mechanic, be it a showroom or local mechanic, no matter it used to take 2 to 3 hours for the service to be done. It made me believe, just take care of your ride, not only when it is needed, but also when it is scheduled to and the ride will take care of you when you need it to. 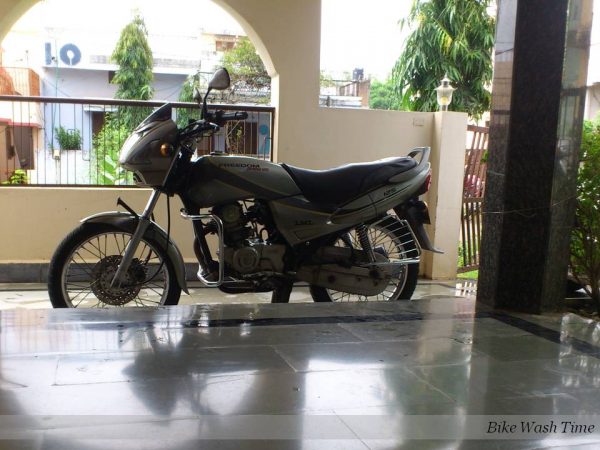 I now own a blue Bajaj Pulsar 200NS, which is again a fun to ride loaded with many features and an extremely powerful engine. Well the journey with this new ride has just begun. It was end of an era but I hope this is the beginning of a Legend.