Three camouflaged bikes were recently caught doing test runs together near the Bajaj plant in Nidgi by one reader of Motoroids.com. One of them was a camouflaged Pulsar SS200. The other two were camouflaged bikes from the upcoming KTM RC series. We aren’t sure which models they were, but it could be that KTM is testing both the RC390 and the RC200 together. 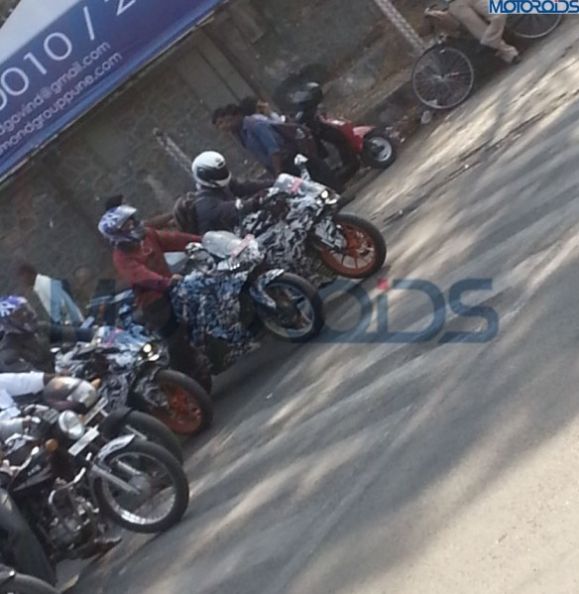 All the above bikes have been in the news for quite some time now. While the Pulsar SS200 will be a faired bike with a sporty side aimed at the masses and very similar to the SS400, the KTM RC200 and the RC390 will be more expensive and will occupy a niche category in the hierarchy of bikes. Honestly, we aren’t really sure if the test bikes were being used for some purpose of racing from one-signal-post-to-another but the photo does suggest so.

Now, some details on the individual bikes!

The Pulsar SS200 (or the 200SS as you may call it), has been in the eye of action ever since the first spyshots started funnelling in. It was supposed to be the first ever full-faired bike from the stables of Bajaj. Touted to be powered by a fuel-injected version of the Pulsar 200NS’ engine, the bike might deliver around 25 PS of power. It is widely seen as the virtual successor to the old warrior named Pulsar220. However, Bajaj pulled a surprise at the Auto Expo when they showcased the elder sibling Pulsar SS400 and the CS400 Cruiser sports.

Here’s hoping that the bike makes a foray sooner rather than later! 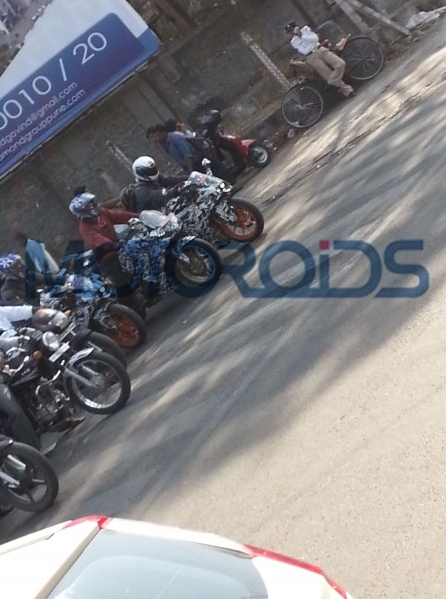 On the other hand, the KTM RC series of bikes are the faired counterparts of the KTM Duke line-up. The are powered by similar engines, albeit with slightly higher specifications. The riding ergonomics and the seating position will be slightly more track-oriented, and the prices will definitely be a bit higher than the Duke counterparts. While the KTM RC200 will understandably be the KTM 200 Duke’s compatriot, the RC390 will do the same for the KTM 390 Duke.

Bajaj and KTM are definitely doing a world of good to Indian motoring enthusiasts by propping up interesting products at regular intervals and reasonable prices. It started with the Duke 200 and the Pulsar 200NS, and was followed by the KTM 390 Duke. Aren’t you guys waiting with anxiety for the faired series?? We are…!

Also Check Out: BA Reader Spies New Pulsar 180NS on Test in The Most Comprehensive Makeover Ever