BikeAdvice readers were the first to know about this scooping bit that TVS is working on a new scooter which will be based on Wego. We shared the first spyshots of a hidden mule in April (See here). 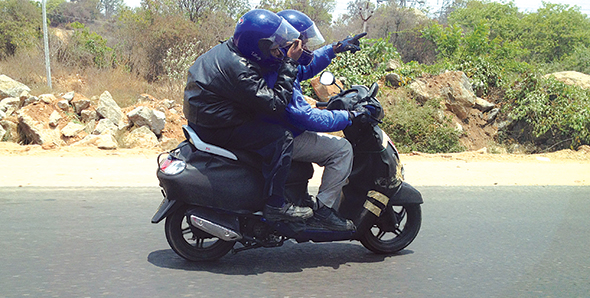 Now, for the past few days, the scooter has been caught multiple times as TVS is out on the roads testing different mules as the launch nears. We have landed upon a couple of more pictures from different sources. In the picture above, from OverDrive, it appears to be one of the similar mules that was caught earlier. It is hidden but appears to be bigger in size than Wego. It has got interesting looking alloy wheels and telescopic shock absorbers.

In the pic which follows this paragraph (from Team-Bhp), the mule is camouflaged with criss cross lines but it also has a few accessories. This mule also carries a normal white-black registration number and there is a possibility that this mule might have been given to some generic lad for testing. What has become clear from these spyshots is that the new scooter will have its fueling at the rear just over the tail lamps. 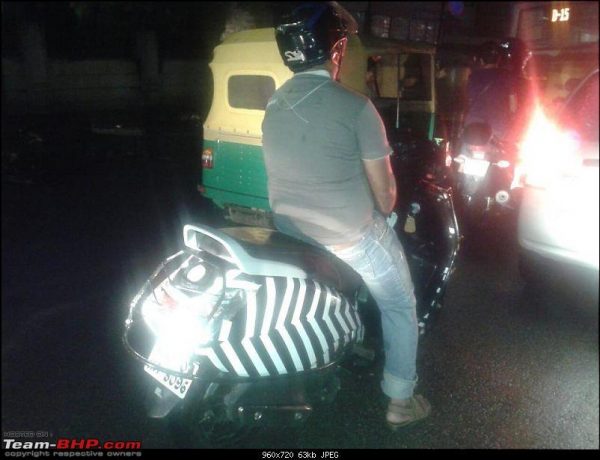 From whatever we have seen till now, this Wego based scooter bears a sharp resemblance with Honda Activa. This new scooter is expected to target the male audience who are looking for scooters but find the Wego and others too small and too feminine. And hence is the bulbous shape. Launch might just happen in a couple of months from now and we expect it to sit just over TVS’ flagship Wego.