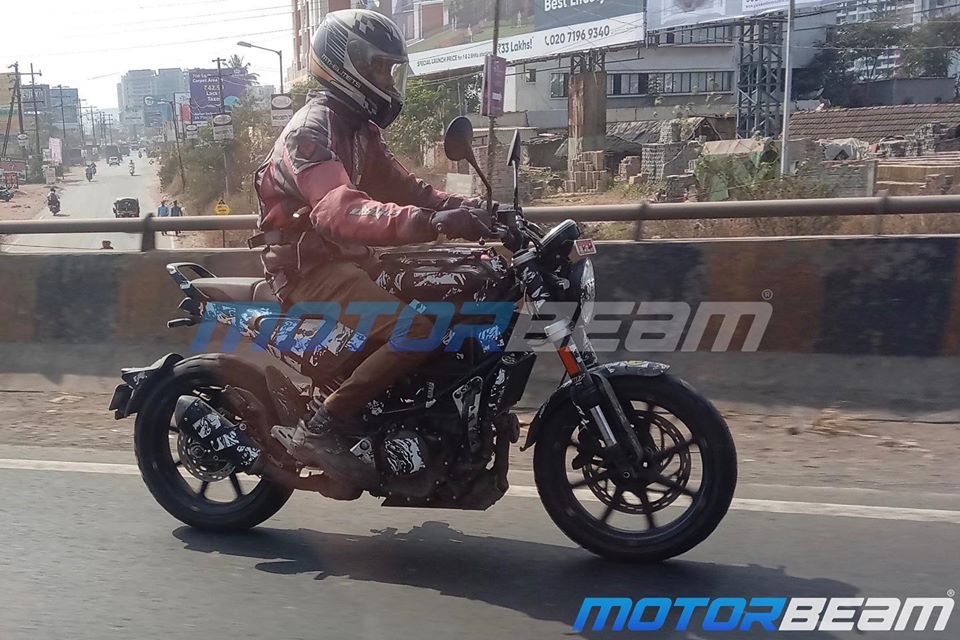 Swedish brand Husqvarna has debuted in India earlier this month. KTM officially revealed the surprise quarter liter versions of the Svartpilen and Vitpilen at the India Bike Week and confirmed that both the motorcycles will be launched in India very soon.

Ahead of that, the Svartpilen 250 has been spotted testing on our roads. Svartpilen is the more relaxed scrambler version in the portfolio against the cafe racer Vitpilen. Svartpilen has raised handlebars offering a more upright seating posture as we can also see in the spy pics.

In place of costly Metzelers (or some other international brand), the quarter liter Svartpilen will come with knobby MRF tyres in India. It will continue to produce 31 hp of peak power at 9000 rpm and 24 Nm of max torque from that 288.8 cc,single cylinder, DOHC engine which will be in its Bharat Stage VI guise.

That ugly looking rear grab rail is an Indian regulation along with a saree guard (not visible in these pics). The Svartpilen weighs 154 kg, 1 kilogram more than the Vitpilen. It will continue with inverted WP suspension at the front and dual-channel ABS by BOSCH as standard.

This mule must be in the final stages of testing as deliveries of the Huskys will commence from February 2020 onwards in India. How Svartpilen and Vitpilen 250s will be priced will determine Bajaj/KTM’s strategy for the Husqvarna brand in India. Internationally, it is sold over the corresponding KTM motorcycles but will the same strategy be fruitful in India?