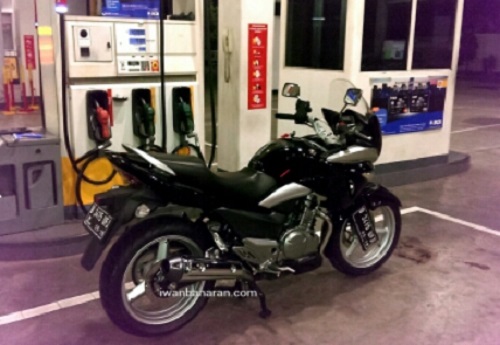 Suzuki’s quarter-litre offering in India, the Inazuma, a scaled-down version of the mighty Suzuki B-King, has failed to make any impact in the country, thanks to its super-inflated launch price-tag. Suzuki India recently did what no two-wheeler manufacturer in India had ever done before – the company slashed the price of the bike by around a lakh. Then it even went a step further and paid the difference to the customers who had bought the motorcycle at its earlier price (not that there were many!).

Like India, Suzuki already sells the Inazuma in Indonesia and following a price cut here, Indonesia also saw a price reduction. And now, an Indonesian portal iwanbanaran.com has received a spy shot of its semi-faired sibling GW250S under tests in that country.

If you are unaware, GW250S is the semi-faired sibling of GW250 (Inazuma) which was unveiled by Suzuki last year at Auto Shanghai. Apart from the half fairing (and hence a bigger look), GW250S is mechanically absolutely the same motorcycle as the Inazuma we have in our country.

We have not yet ridden the Inazuma yet but fellow journalists have been swayed by its build quality, smoothness and vibe-free nature throughout the rev range. Their unanimous verdict is that this is one of the best touring bikes in India. Going by this, the GW250S will, with that added fairing, be an even more ideal tourer!

With this spotting, it becomes apparent that the company has plans to launch the Semi-Faired GW250S in Indonesia and hence, we become hopeful of it making it to our Indian shores as well sometime early next year. It makes sense actually, since Indians, for some reason, love faired motorcycles!

However, with competition offering a lot more bang for your buck, keeping a low profile would just not help the Inazuma or the GW250S. I have said this earlier and would say it again – Suzuki needs to go all out with the marketing of this motorcycle and probably throw in some freebies as well.