Even if you put a gun and force a motor maniac to call against the existing Kawasaki Ninja 250R, chances are that he will prefer to take the bullet rather than calling other quarter liters better in terms of sheer driving pleasure! Ok, that was an exaggeration but there is no bike till 3 and a half grands which puts up a wider smile than the Ninja 250R on our faces. 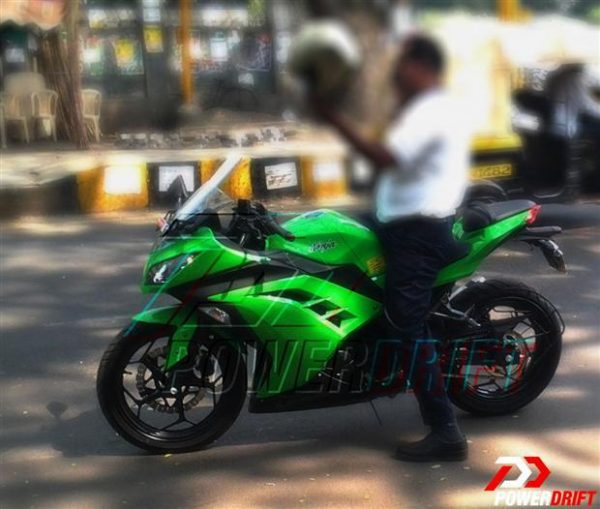 Last year Kawasaki unveiled a slightly bigger Kawasaki Ninja 300 and since then we have been very affectionately (or violently!) waiting for the green machine to arrive in India. If you are one among that lot, this article will make you jump out of your ground floor window! Yes, the spyshots you see here are the first ever pics of the upcoming Kawasaki Ninja 300R on Indian streets.

The constant murmurs now gather a confirmed streak and we, for sure, can project that the bike is coming to us and soon. Caught by the folks at PowerDrift, this ‘on test’ machine was spied just around the Bajaj’s plant in Pune and the rider riding the bike appears to be a Bajaj employee considering his traditional white T-shirt/dark trouser attire. 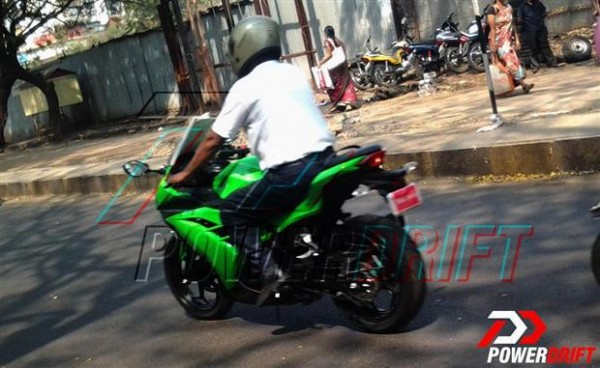 From the pics, the bike really looks more contemporary, smart and bigger than the 250R. The international version of Ninja 300 produces 39 bhp of peak power output  from its bigger 296cc mill with a torque output of 29Nm. These figures are approximately 6PS and 7Nm more than the current Ninja 250R which should transform the 300 a hoot to drive around the town. It would be interesting to see how has Kawasaki mapped the power output of the 300. We would really want to have the similar exponential power curve to exploit and enjoy the sudden mad rush which is so Ninja!

We expect this Ninja 300 to make way sometime around June this year. Pricing of the bike will be the key here considering that 250R is already really costly considering the plethora of options that have come up during the coarse. If Bajaj can pull up a good one, we have another winner in the making.

A few dealers are taking bookings unofficially and we feel Bajaj might discontinue the current Ninja 250R.