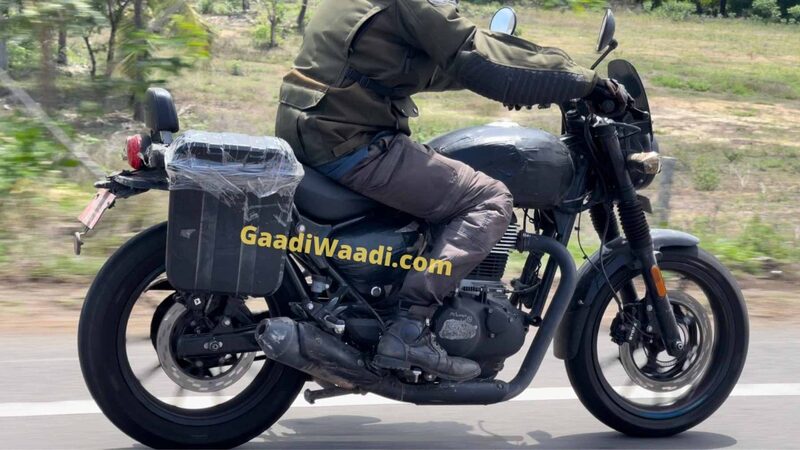 So, Royal Enfield have a host of products in the pipeline, either ready to be unveiled or undergoing extensive testing on Indian as well as International soil.

The latest bike which is strongly rumoured to make its debut somewhere next month is the Hunter 350. We have shared a lot of speculations, rumours and visible details regarding the Hunter 350 in our many previous reports.

Adding to the numerous reports, this time the Hunter 350 test-bike has been spotted with various accessories fitted which can be utilised for touring purposes.

The latest images show the upcoming Hunter 350 test-bike equipped with a small flyscreen mounted on top of the round headlight, a pillion backrest and a set of panniers on either side of the bike.

This latest capture of the test-bike confirms one fact the new Hunter 350 will have enough grunt to allow the owner to take the bike out for long-hauls on our highways. Additionally, RE will be offering a host of accessories for the new bike in order to facilitate the owner in his/her dreams of exploring the country and its wonders.

Royal Enfield Hunter 350 – What We Know So far

Well, we know a lot about the upcoming roadster motorcycle from Royal Enfield.

The upcoming Hunter 350 will be built around the same Dual-Cradle Frame as the Classic 350 model and will be equipped with telescopic front forks (covered in fork gaiters) and twin-sided rear shock absorbers.

Carrying over from the 350 cc platform will be the 349 cc, single-cylinder, air & oil-cooled SOHC engine which will be producing similar figures of 20 HP of power and 27 Nm of torque – connected to a 5-speed transmission system. Launch, as we see, can happen very soon…