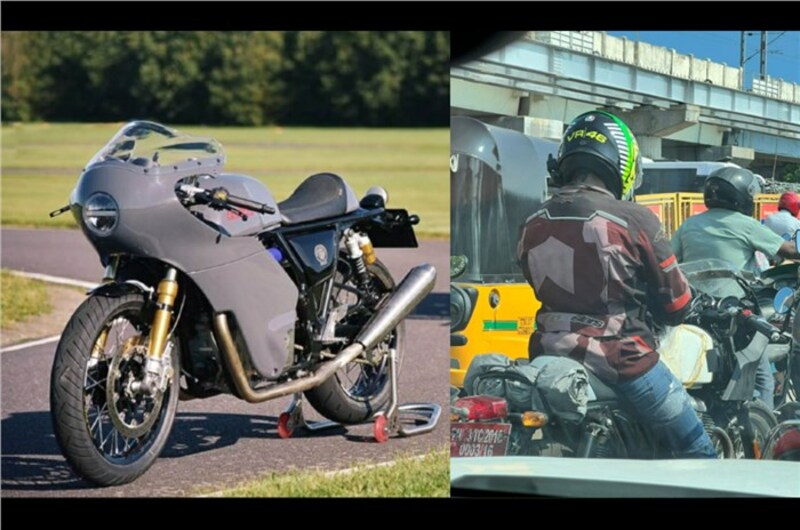 So, an online portal has shared an image of what appears to be a Royal Enfield Continental GT stationary in the traffic, but with partial fairing bolted to it. That is not all, zooming into the image and we can also see bar-end mirrors and a remote-adjustment knob added to the rear suspension of the test-bike.

To catch you guys up to speed, the Royal Enfield Continental GT-R 650 is the company’s racing Continental GT bikes that are specifically modified for racing in the Continental GT Cup. These racing bikes put out more power, have race-specific stiffer suspension, lower clip-on handlebars and full fairing bolted on them.

Coming to the test-bikes spotted in the wild, we can see a standard Continental GT in the image sporting partial faring or bubble-fairing covering the top half of the front of the Cafe Racer. It appears to be a prototype design undergoing fine-tuning and homologation – suggested by the numberplate seen mounted on the top of the bubble.

Moving along to the rear of the bike, a more interesting feature on this bike is the addition of remote adjustability on the rear shocks.

Zoom into the image and you can see a small Black knob right above the reservoir of the rear shocks. This knob will facilitate adjusting the preload of the rear shocks in its basic function and could be used to alter the rebound & damping in its advanced functionality.

However, to the best of our understanding, there are two directions RE could lean regarding the new GT-R model.

Either – Royal Enfield is testing a totally new, more aggressive version of the Continental GT 650 with factory-fitted bubble fairing, lower clip-on bars and a stiffer suspension setup. And offer the adjustable suspension hardware as an option for those who are willing to pay the extra amount it will demand.

Or – Royal Enfield could be testing the factory-official bolt-on kit for the Continental GT 650 with optional adjustable suspension hardware, so that the general public could also taste the track-spec Continental GT-R 650s in the tamed version. This could also allow RE to homologate the bikes so that they can enter their race GT-Rs in actual races abroad.