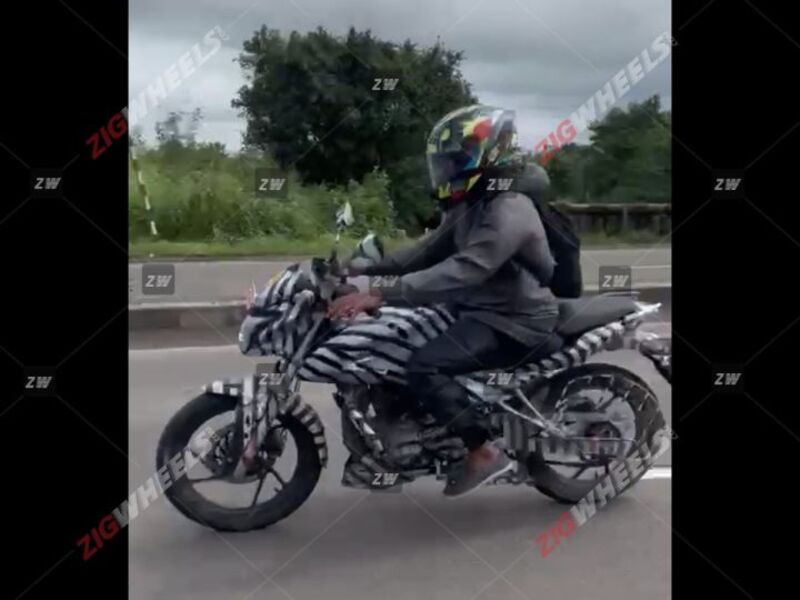 With their first steps into the modern motorcycling era with the unveiling of their Pulsar F250 & N250 models, Bajaj is buckling down to create and release a whole range of motorcycles based on the new Pulsar platforms.

This plan of the company is very evident with the launch of the 2022 Bajaj Pulsar N160, both in single-channel & dual-channel variants.

Now, there have 2 sightings of a new N-based naked motorcycle being tested by the Company. The bike appears to be a smaller commuter model, but it is still a mystery what displacement could it be carrying.

Speculations are high – stating that the bike in the spy-images could be the new ‘Pulsar N150’ model. However, it is hard for us to accept this fact. Very recently, Bajaj officially launched their new Pulsar N160 in 2 variants. Will it make sense for the company to launch a 150 cc model which will sit so close to a new product and which, obviously, will sport very similar performance numbers & features?

This is why we believe that the test-bike that has been captured twice, could be the new ‘Pulsar N125’, carrying forward the design language first introduced on the bigger Pulsar N250.

Looking closely at the test-bike, we can see that the bodywork remains unchanged compared to the previous bike caught testing. Although covered in camouflage, the modern & youthful styling with a sharp headlight and sporty bodywork is unmissable. However, one major change we can see on this bike is the use of split-seating, unlike the previous model’s single-piece unit.

Another speculation is that Bajaj could offer the new Pulsar N125 in 2 variants – Front Disc/Rear Drum configuration & Dual Disc configuration. Being a 125 cc model, if these configurations are offered, the new N125 could become a very appealing bike for prospective commuting customers.

It is hard to yet conclude if this test-bike is close to its final testing plan or not. Therefore, it is safe to assume that Bajaj might launch the new Pulsar N125 somewhere in 2023. It could be priced around Rs. 1.10 Lakh & 1.20 Lakh range (ex-showroom).