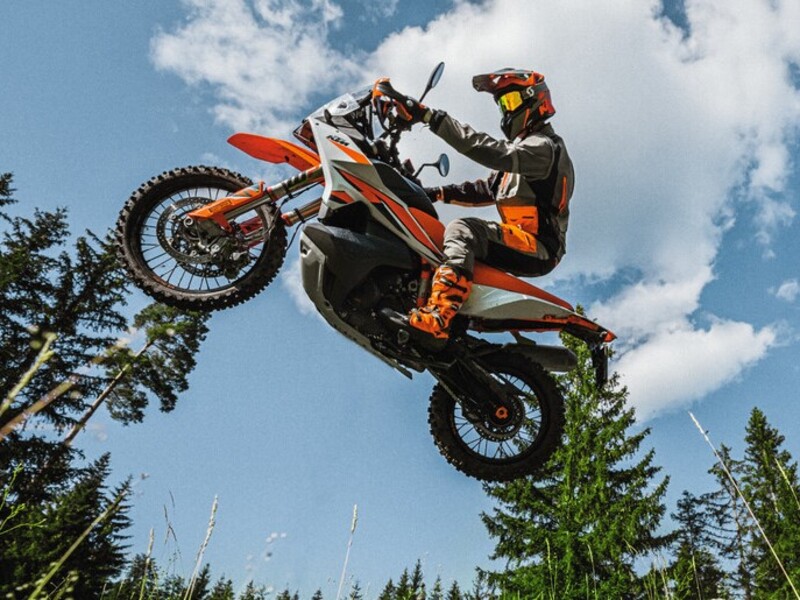 So, KTM have announced the arrival of their new hardcore 2023 890 Adventure R destined for European and American markets.

KTM is calling the new 890 Adventure R the ‘hyper-focused’ offroader, inspired by their champion 450 Rally racing machines and equipped with the latest hardware & tech to allow the rider to take on the wilderness with total confidence.

The 2023 iteration of their hardcore 890 Adventure R ADV still continues the blueprint of the previous generation model but has received many hardware & technological upgrades in an attempt to stay ahead of the competition.

The most significant update the Austrian manufacturer is emphasising on is the new suspension hardware, directly inspired from their 450 Rally – Dakar conquering rakky machine.

The new WP suspension package consists of fully adjustable WP XPLOR forks at the front & WP XPLOR PDS monoshock at the rear. This setup is specifically tuned to offer improved feedback & response so that the rider could have a predictable riding experience and fatigue-free riding sessions.

Also picked from the 450 Rally machine, the bodywork, aerodynamics and ergonomics of the new 890 Adventure R have also been improved. This new design language was also spied a few months back when one of the test-bikes was spotted testing on the Austrian roads. The new design language consists of the new fairing & cowling which covers the front headlight and extends all the way back to and beyond the new fuel tank. It is expected that this new design will also be seen in the upcoming Adventure models.

This revised bodywork is aimed to offer better protection during trail &or enduro riding, combined with better wind protection during highway stints. Other changes brought on the ADV are new & lower windshield, high front fender and an engine protector.

Coming to the electronics & features, the 2023 KTM 890 Adventure R gets equipped with a new 5” TFT display. The display gets USB-C connectivity and a revised UI consisting of coloured pictograms and intuitive graphics to better help the rider tune the machine. The turn-by-turn plus navigation has also been updated and the feature to select destinations from previously searched ones has also been added. A new calling option has also been introduced, facilitating 10 numbers to be added to the favourites list.

The software suit has also been updated, featuring a new-gen ABS control unit which utilises a 6-dimensional sensor which further improves the ABS functionality during straight as well as braking during turning. The Offroad ABS has now become a part of the Offroad Riding Mode, or the rider could directly use the Rally Riding Mode which will turn the ABS off completely.

Finally, the 2023 KTM 890 Adventure R will come as standard on Mitas Enduro Trail+ tyres for the American & European markets. The American market will get LED turn-indicators as a standard option as well.