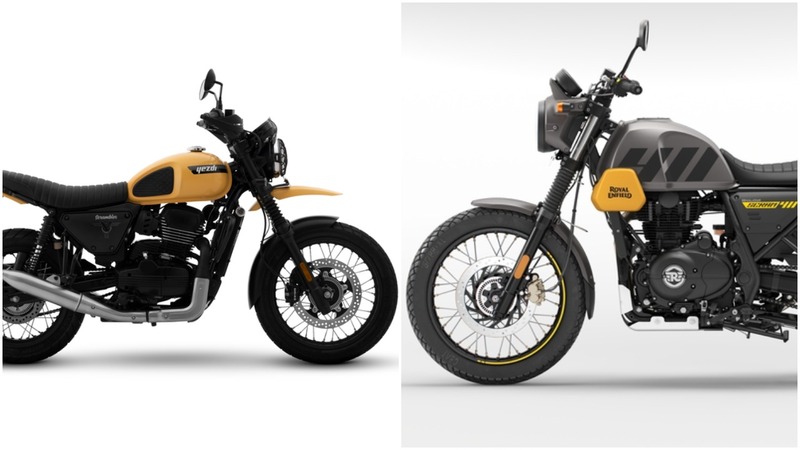 The ADV segment and its sub-segment are gaining a lot of traction in our country.

Today, Royal Enfield have introduced a second scrambler model in the Indian market in the form of Himalayan Scram 411 to take on the Yezdi Scrambler, which happens to be the first scrambler of our country by an Indian manufacturer.

The Yezdi has a better engine configuration utilising a DOHC system to produce more power from a lower displacement. However, the Scram’s torque figures are higher by 4 Nm, that too at a lower rev range which in turn will offer better low-down grunt.

The RE Scram will give a better range between empty tanks as it holds nearly 3 Litre more fuel than the Yezdi scrambler. But, it will have a lower top-speed as it only gets 5-speed transmission compared to Yezdi’s 6-speed one.

While both the scramblers have similar ground clearances, the Scram 411 has better and longer suspension travel which makes it more suitable when the tarmac ends and dirt begins.

The Yezdi Scrambler is lighter, while the Scram 411 has lower seat height and is heavier. The Yezdi having a smaller wheelbase will offer better handling characteristics combined with being lighter.

Though the rear brakes and the front tyre profile are similar, the front brake will have a better bite on the Yezdi thanks to a bigger rotor. The traction from the rear wheel will also be better off and on-road on the Yezdi as it has a wider profile than the one on the Scram 411.

Feature-wise, both scramblers are very similar. The only major difference is the instrumentation type, Yezdi having fully-digital while the RE having semi-digital.

On paper, we can see each scrambler has its own strengths and weaknesses.

While the Scram 411 has a lower seat and more fuel capacity, the Yezdi Scrambler has more power, is lighter and has a smaller wheelbase. This will allow the Yezdi to be a better handling machine in this comparison. On long distances, the Yezdi will perform better as well as it gets a 6-speed transmission which will allow for a higher top-speed than the Scram 411.

However, there is no right answer when it comes to selecting which among the two is better based on some figures on paper. How these two machines actually fare against each other can only be said once we ride them back-to-back.

We will be putting these two machines to their paces as soon as we get our hands on them. Stay Tuned……..