It is said that when you really want something and believe truly that it belongs to you, the whole universe conspires to make it yours. In my case the universe took a good 8 years to finally help me wheel it in. My black Royal Enfield Thunderbird Twinspark. After 8 years of dreams, shattered dreams and dreams yet again; I finally owned the beast on 1st Feb this year. 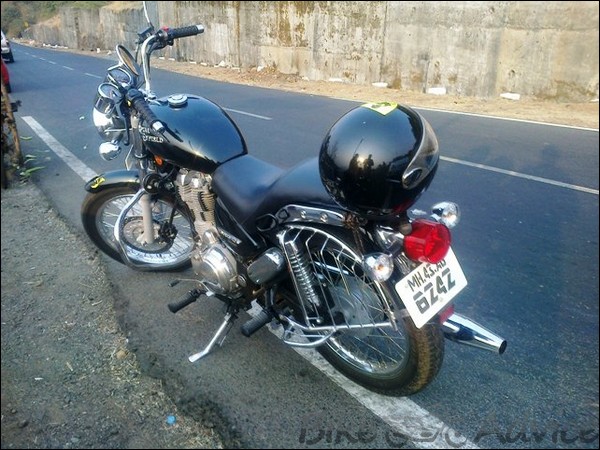 You must be wondering how come I am then putting up a ownership review so soon. That’s because I have already clocked over 2000 kilometers on the Thunderbird in my aim to get past the run in period fast. So how was the first 2000 kms? Read on!!

One of the very few irrefutable facts is that the RE Thunderbird stands out in the crowd in terms of looks. The rather generous dollops of chrome between the blacks gives the bike a great presence. The high handle bars, the two step singular seat, the back rest christened with Thunderbird Twinspark and the long extended exhaust give a characteristic look to the bike.

There are very few bikes on Indian roads that has such a commanding look. The off side to the looks department is the rather lack luster paint job on the chassis of the beast. Not really finished well, it gives a crude unfinished look to the bike’s backbone. But hey, the gleam off the chrome would blind the admirer so this small crude paint job would mostly go unnoticed!

The 350 CC engine grunts and roars on the opening of the throttle. The sound that is music to many RE enthusiasts. The long exhaust has toned down the thump a great deal to meet with the noise emission norms. However I loved the stifled thump of this beast. Turn the throttle on and the bike responds very nicely. 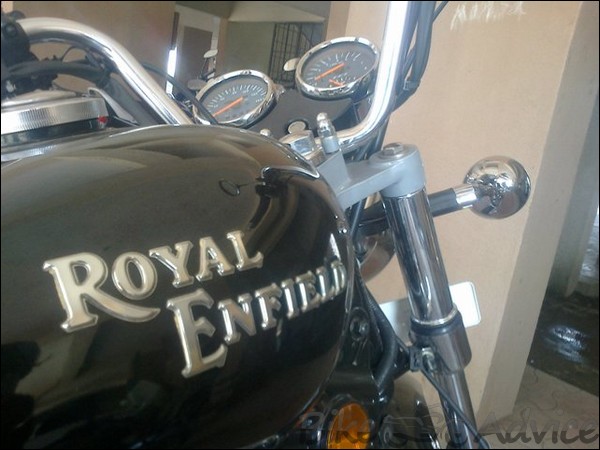 Contrary to the belief, this RE does pretty well in terms of straight line acceleration. It does a 70 Kmph in no time and feels like silk at that speed. The gears are more clunky than other bikes and takes a little getting used to. You really have to “Shift” the gears and there is nothing called slick changes here. This is very much the characteristic of the RE engines that have rolled out earlier too. I did have a couple of small hiccups in the running in process though.

Misfires when the throttle is opened up aggressively. But a trip to the service center solved it in 15 minutes. Overall it is a power house and the throttle response is also great considering the weight of the bike and my weight put together is close to 270 kgs! (Glad I don’t have to upload my pictures).

The REs have always been known for their comfort. And this one too fits the bill completely. The best part is that Thunderbird has a back rest for the pillion. So not only does the rider get to enjoy the ride but also the pillion gets to rest his/her back and take in the visuals! The seat, however feels a little too heated up due to foam leather.

That heats up the seat quite a bit and it causes a little discomfort; specially riding in peak hour traffic or in the middle of afternoon. But that’s nothing a good lining guy cannot rectify. The bike is very smooth on high speeds and it really feels like you really are cruising. I have not touched the 3 figure mark yet as the running is still on. However I did go up to 90 Kmph sometimes and it was a great experience.

I have always maintained that the difference between doing high speeds on a RE and on other bike is that other makes you feel you are speeding. But a RE cruises. Not in any way denying the capabilities of certain champion sports bikes like R15, Pulsar 220, Yamahas etc. Overall it really is a surreal experience riding the Thunderbird.

Now here is a department, REs are not known for. But I have managed to extract an average fuel efficiency of around 40 kilometers to the liter. The highest has been around 43 and the lowest has been around 35. This would surprise most including me. But the refined tuning on the engine, the UCE (Unit Construction Engine) and the twin sparks add to the overall fuel efficiency.

Getting a 40 Kmpl is quite frugal for a Royal Enfield Thunderbird Twinspark and I am really happy about it. The brakes are also very well done. The big rear drum brake is not quite efficient as the front disc ones. However that is obvious and also has a reason well attached to it. The drag on the drum brakes prevents the wheels from locking and offsets the strong force of the front disc brakes.

However in times of heavy braking the wheels still lock, but nothing that a good rider cannot handle. The tires however feel the need to be replaced. I am not too thrilled about the front circular tread tires. It has failed to give me confidence at high speeds and will be replacing it soon.

Overall it really is fun to get a Royal Enfield Thunderbird Twinspark eat up the tarmac. I am looking at long journeys, high speeds and many memories from my new love. And the bike instills so much confidence in the rider that I am sure I will be seeing many sights and sounds on this beast. REs also is a lifestyle statement for many. The community is close knit and that gives owners like yours truly opportunities to meet new people and make friends with one thing connecting all of us – The Royal Enfield bikes!

Thanks and ride safe guys. Never forget the helmet, or else you will have surely met hell.