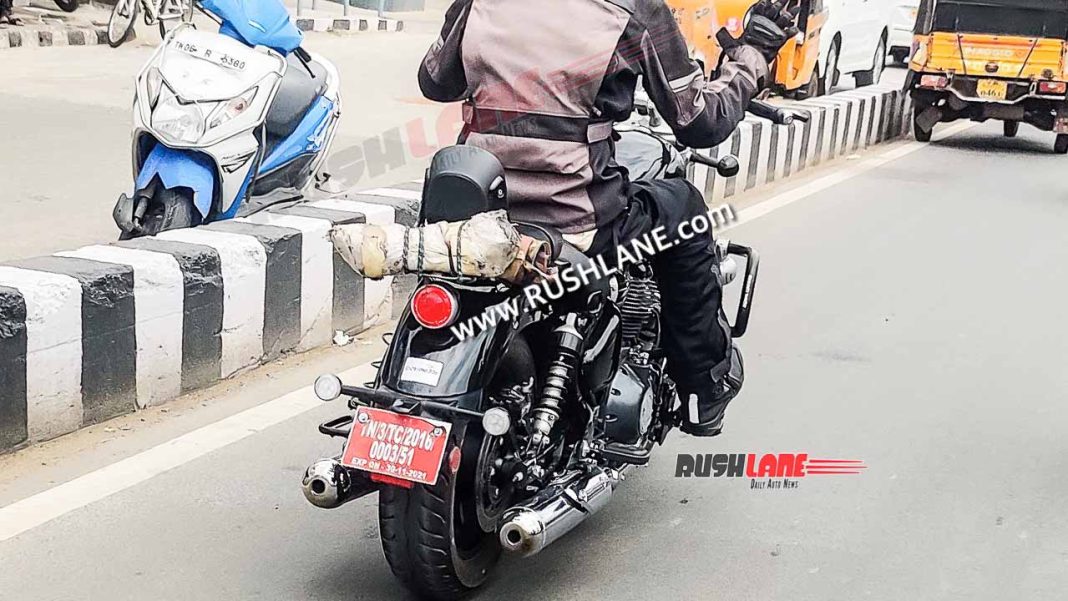 Royal Enfield Super Meteor launch in India is touted in the first few months of 2022, however, its unveil is probably just days away at EICMA…

What you are looking at on this page are the latest spy pics of an all new motorcycle that Royal Enfield is testing on the roads since the last many months.

According to recent speculations this motorcycle is likely to be called as Super Meteor – based on the recent hit – the Meteor 350. This latest set of spyshots, for the first time, reveal, the motorcycle in almost production guise.

Right from the sparkling black color to the finished parts everything suggests that these are the final validation units undergoing the last testing regime.

There are twin exhaust pipes emanating out from both the cylinders and yes, that means that this upcoming model will come equipped with the same twin cylinder motor that does duty on the Interceptor and Continental GT 650. There may be tuning differences, however, to cater to the different application on this one.

The Super Meteor, if it will be called as, has a fair bit of road presence and looks chunky. It has an open chested easy riding position with stretched legs – typical of cruisers.

If you are unaware, Royal Enfield is also testing another version on this platform that has a relatively sportier posture and that may come later.

This will be the new flagship from the company that will take the baton forward. We are expecting a starting price tag of around Rs 3 Lakh for this one.

According to latest reports, the Super Meteor would be unveiled at EICMA and will be launched in India early next year.