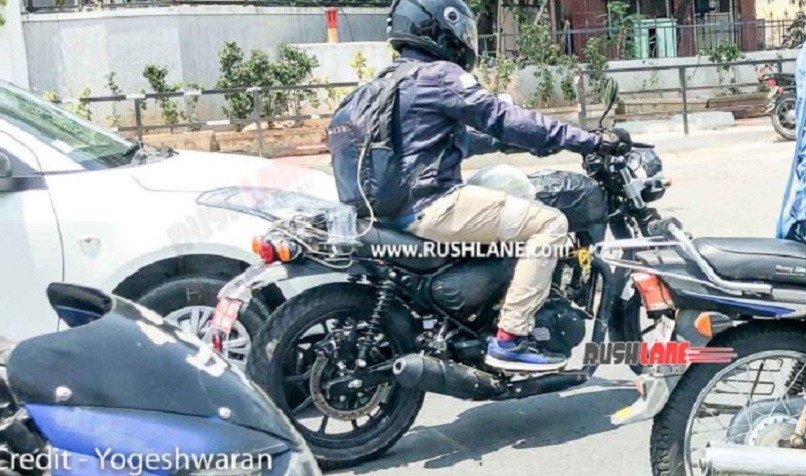 Royal Enfield Hunter launch timeframe is not known at this point, however, given the aggression we expect it to be sometime this year…

Facing heat from the competition, Royal Enfield is on its knees and has plans to comprehensively upgrade its lineup. This includes bringing newer generation models of existing motorcycles along with introducing new bikes to attract a wider audience and grow market share.

In its pursuit, the company is working on an all new roadster styled motorcycle which is rumored to be called as Hunter. RE has filed patents for many new brand names and ‘Hunter’ is one among them. So, chances of a motorcycle coming under this brand are high and of all the bikes that we have seen on test, the Hunter branding suits this model. So, let us call it Hunter for the time being.

Hunter is a low-slung roadster which tries to blend Royal Enfield’s classic design theme with a wee bit of modernity. This gets a conventional round headlamp (with a bulb as was seen on earlier spy pics), raised handlebar and telescopic shock absorbers. The one piece seat ends in a sportier looking tail which, again, appears to have bulb type lights (brake and side blinkers). The small upswept exhaust gives it a sportier stance which is further accentuated by that fairly fat (and small) rear tyre.

We can also notice some test equipment on this test mule which is connected to something inside that rider’s shoulder bag. Now this is an interesting way of testing!

This Himalayan Copy Packs in More Features Than Original Himalayan

The engine looks like it is the same Meteor 350’s 349cc, new-generation, air-oil cooled SOHC, long stroke unit and expect similar power and torque outputs in its new application as well. This engine is significantly better than the current 350cc motor on the Classic 350.

Just yesterday the online auto media was abuzz with the spotting of an all new motorcycle from Classic Legends – a direct rival against Royal Enfield. Chances are that it could be the first Yezdi for India. You can check that spotting here. So, it’s a lot happening in this segment and bikers should see some fireworks in the days to come…