R15 gets a shot in the arm ! For some time, the extremely agile R15 had been pushed to the fringes in the Indian biking scene. The launch of bikes which boasted of 20+ PS figures had somewhat taken the arc-lights off this beautifully designed bike from Yamaha. 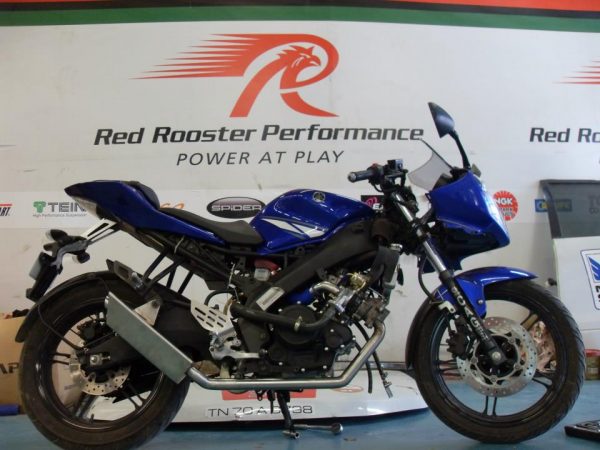 However, it had managed to retain its tag as the bike with the best cornering abilities. Users and new-buyers alike also took consolation from the fact that it was arguably the best-looking bike on the scene, coming neatly wrapped up in an aerodynamic fairing.

To provide that extra kick-in-the-seat-of-the-pants of the R15 users, Red Rooster Performance has come up with a blinder. They recently declared on their Facebook page that a turbocharger kit for the R15 is in the pipeline. The kit will also include a custom exhaust and a BMC air filter as well. According to them, it will be available for both R15 v1.0 and R15 v2.0 as well.

What is a Turbocharger?

Let’s delve into some technical nitty-gritty. A turbocharger is a device that boosts the power figures of an engine of given size by forcing more air as well as more fuel into the combustion chamber. It basically consists of a compressor which is powered by the exhaust gases of the engine, and draws more air from the surroundings before letting it into the combustion chamber in each intake stroke.

Who is Red Rooster?

Now, a word or two about Red Rooster Performance. It’s an enterprise that aims to bring aftermarket performance upgrades within the reach of as many users as possible. They have a facility at Bengaluru, and they enjoy partnerships with some of the known manufacturers in the world; BMC Airfilters ( Italy ), NGK Spark Plugs ( Japan ) and Spider Tuning ( UK ) being a few.

The chassis and the suspension components of the R15 have proved their mettle, you need to hurtle into a corner at a 100+ kph speed to experience this. There’s no doubt on whether the Yammie will be able to tame this new found spike in the figures. But will the kit come without any reliability issues ? The omnipresent Indian question “Kitna-Deti-Hai ?” also assumes importance here.

R15 users, will you agree to bet your bucks on Red Rooster Performance? Do share your views.