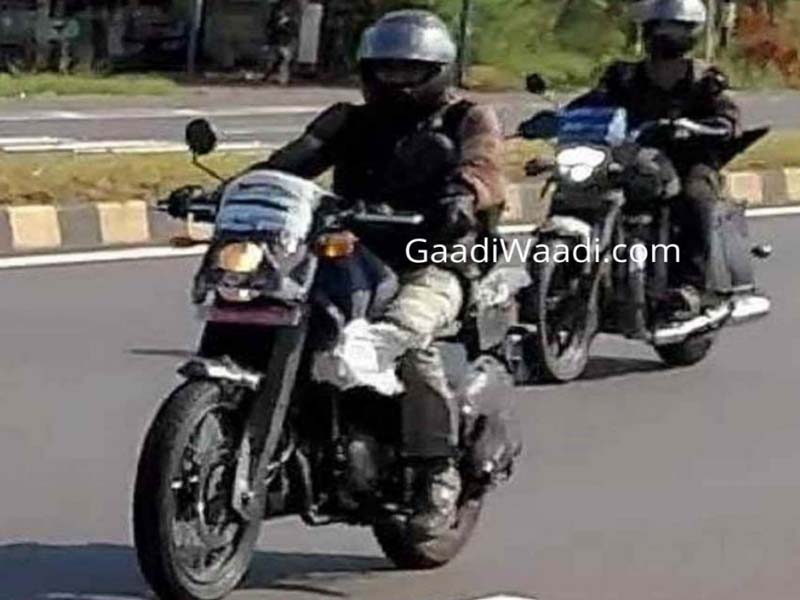 Upcoming RE Scram pics here, surprisingly, feature a heavy camouflaged model. This comes after it was leaked in its clay model…

Royal Enfield has several products waiting in the pipeline. The brand has been testing out a few upcoming machines pretty regularly on the Indian streets.

In yet another such test run, the 650cc cruiser from Royal Enfield has been spotted along with the hyped and slightly surprising Scram 411.

The images reveal sweptback handlebars on the 650cc cruiser with a low-mounted seat. Like its current Classic 350 series, the upcoming 650cc also follows the teardrop shape tank design.

In the current imagery, the spied 650cc tail is not visible but from earlier leaks, we have already seen it. It will utilize USD forks, twin shock absorbers on the rear and will be equipped with alloy wheels, unlike the 650cc sibling RE Interceptor that uses spoke wheels. The cruiser will most probably get completely LED lighting.

The RE 650cc cruiser design is inspired fro the KX Bobber concept that appeared at the 2018 EICMA show. It is almost obvious that the upcoming cruiser will be fitted with a parallel-twin motor mated to a 6-speed gearbox like the other 650cc machines from the brand.

It gets a smaller front wheel – most probably a 19 incher. There is no front visor along with the signature exoskeleton. There are other minor changes as well that have emerged from this earlier leak of its clay model.

Both these motorcycles are in the pipeline and may be introduced in the coming months.