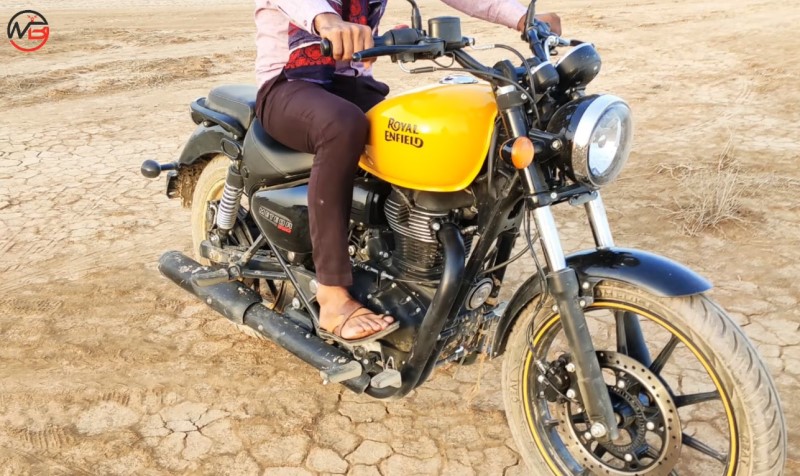 Confirmed RE Meteor 350 spy pics have surfaced, revealing the new sub-brand. The good news is that it is coming very soon…

It was in the news that Royal Enfield is going to launch a new motorcycle in India very soon. There were many names that were patented by the company and today we have the first view of how the motorcycle will look in production form, along with its brand name.

Royal Enfield’s next motorcycle will be called as METEOR and it will sport a 350cc engine. This can be confirmed by looking at the sticker on the side panels of this spied model. The Meteor 350 appears to be a replacement of Thunderbird 350X or in other words, Royal Enfield may have plans to present it as an all new model, separate from the Thunderbird family.

It sports a yellow colored fuel tank with black colored body panels. This color theme is borrowed from the Thunderbird X family. It sports CEAT ZOOM tyres along with a round headlamp which has a conventional bulb inside – so no LEDs there! It sports a flatter handlebar, shorter front fender, split seats and forward set footpegs.

The engine appears to be slightly different in its outer appearance from the current 350cc motor. It does not sport a kick starter and the exhaust pipe is also devoid of a thick cat-con which is present in the Classic 350 BS6. There is nothing known about the specs yet!

Not a Single BS4 Motorcycle Available: RE Announces Only BS6 Sales from Tomorrow

These pics are coming from a video from Mad Biker who informs that this motorcycle was spotted near his place for promotional shoots, as confirmed to his friend by the officials present there. This means that what you see on your screen is a production ready model and there are all the chances that it will be launched in India anytime very soon.