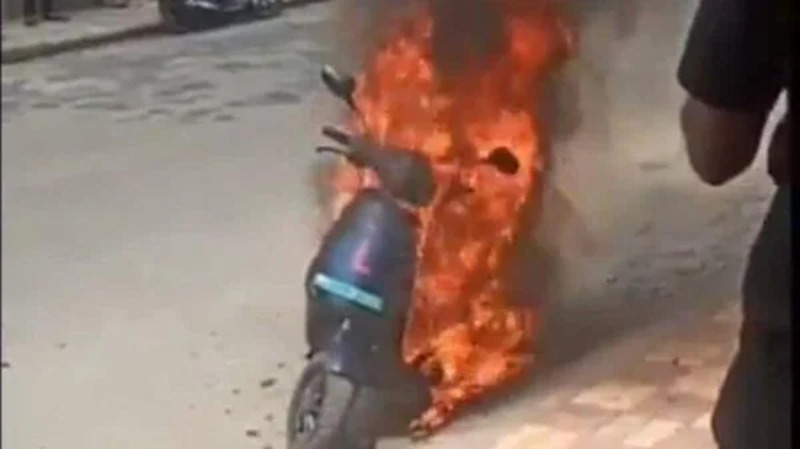 Rajiv Bajaj on EV fires – he blamed the current regulations. He also questioned people who have no relation with vehicles doing electric vehicle business!

The numerous reported and unreported cases of Electric two-wheeler fires which encompass some big names, have dented the reputation as well as the trust of the existing and future customers.

These events became so rampant and lethal at one point of time that the Central Government directed the companies to slow down the new introductions, instructed them to voluntarily recall & check all faulty systems and asked the Defence Research & Development Organisation (DRDO) to investigate the cases.

Initial research have found that the faulty BMS and battery cells & modules are the real cause of these fire incidents. However, the final report is still to be shared with the general public.

On the occasion of inauguration of their new EV Manufacturing Plant at Akurdi, Mr. Rajiv Bajaj (MD, Bajaj Auto) had some strong words & thoughts about the present state of EV segment and the various fire incidents

While interacting with a news portal, Mr. Rajiv Bajaj slammed the current Regulatory Environment for the various EV related fire incidents that took place in the past few months.

He explained that the relevant authorities in the present government have ‘deliberately diluted’ the norms which has resulted in an uncontrolled and unregulated introduction of low-speed scooters in the market.

“Under the guise of low-speed vehicles, you can bring in junk from anywhere and put it on the roads. If you will not have scooters and e-ricks catching fire, what do you expect”

When inquired further as to where could the present government have gone wrong, Mr. Bajaj retorted –

“Where have we gone wrong? It is in the environment we have created that concerned people will have to reflect on. As long as the consumer is smarter than these people, they will make the right choices”.

Mr. Bajaj took no prisoners in his interaction with the media, shared his own experiences & strong observations where he expressed his surprise to the fact that he know of some people and companies who have no R&D experience and/or facility, no engineering, no purchase function etc. but are importing unvalidated stuff and introducing it to our market blatantly. He cites this series of events to be the major reason behind the recent EV fires.

Further explaining the present scenario in his no-holds-barred way, Mr. Bajaj explained that currently, ‘there are only two types of EVs, those which have caught fire, and those which are going to catch fire’. Citing examples of GM and Hyundai, he explained that fire incidents do take place on the ICE powered segment as well, but they have established tried-&-tested systems & methods to address them.

He strongly blames the underlying process in manufacturing to be the reason for the fire which has caused a loss of lives, property and trust in the EV segment.