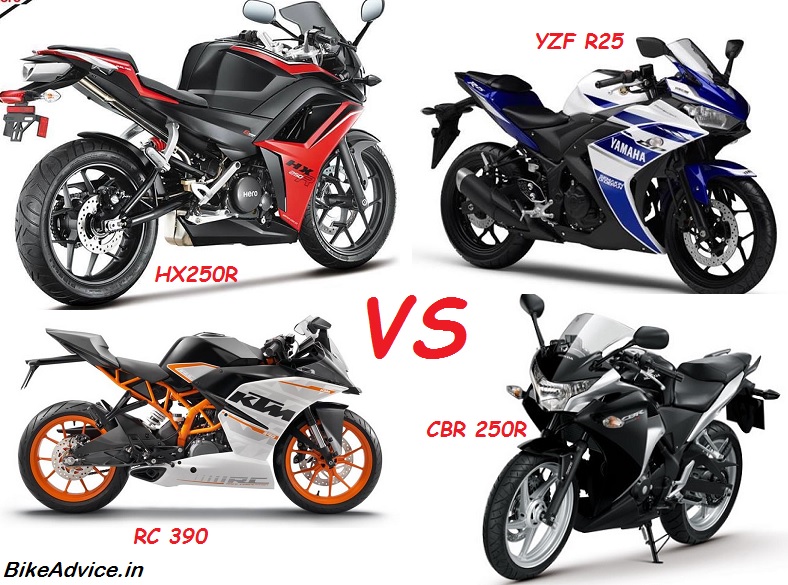 The Quarter litre motorcycle market is all set to see a lot many introductions in India this year. The launch of the Yamaha R25 a few days back in Indonesia has shaken up the market like anything and the dust is not going to settle any time soon. The Indian market, which is slowly maturing to the larger capacity motorcycles, has a lot of launches planned up in the near future. 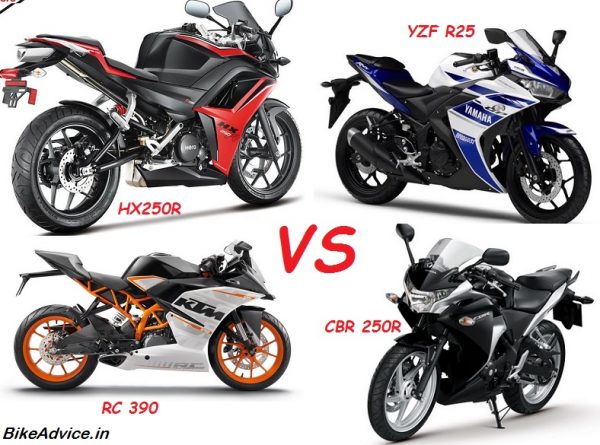 When we posted the last spec comparo of R25 against its twin cylinder counterparts, a lot of us asked why not the HX250R or the CBR250R? So, here we share with you R25’s comparison against the single cylinder rivals it will have.

KTM RC 390 has been teasing us with various test mules for ages and along with the R25, it is the worthy successor of the most awaited bike’s status. The Honda CBR 250R is already being sold in India. Honda has updated the international model but is yet to introduce it in India, and with better looks and that 3PS of power increase, it will be able to face the competition better. Hero, on the other hand, had a surprise for us with the HX 250R just before the Auto Expo, with a 31PS engine which, frankly speaking, was not expected out of them!

Honda’s only advantage right now is that it is available and very much on sale along with its price tag but it is the least powerful of the lot along with being the most unaspirational! The RC 390 is most probably hitting the streets in the next few months and is the most powerful of the lot, owing to its capacity advantage. It;s power output is a shade less than just double of CBR.

Being single cylinders, almost all the other bikes weigh lesser than the R25 but the RC390, with its impressive ground clearance is the pick of the lot.

R25 is expected to be a high-revving stonker of a motorcycle with its dual cylinders more than making up for the extra dough you would need to pay. Being a single cylinder, the Hero’s HX250R is another really really exciting prospect in the making. So which one will you really end up owning, if you have to to put your money on, now?