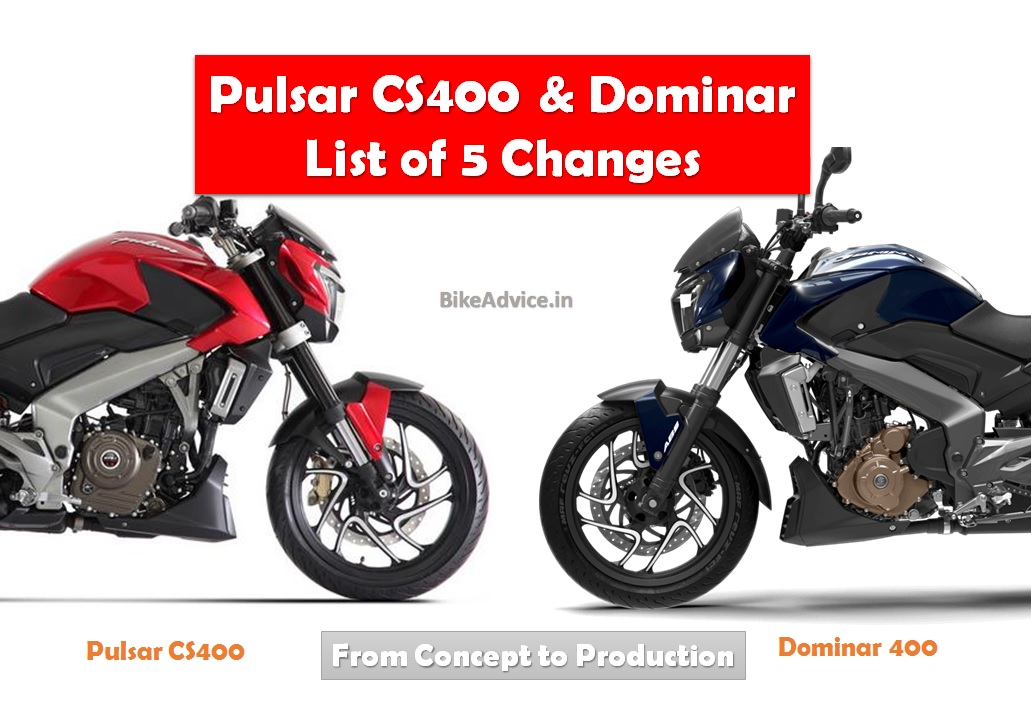 Dominar 400, which was launched last month at shocking prices, was first showcased at the 2014 Auto Expo and Bajaj called it a ‘concept’ back then. When a manufacturer terms a product as a ‘concept’ it could mean they can take the liberty to display a lion and launch a mice.

We have had many such cases – in the recent times I can remember the XA-Alpha and Brezza or the Kwid concept and the Kwid production version (not that these look ‘bad’ but they are extremely different from each other).

But Bajaj, thankfully, did not change the overall looks of the motorcycle and the production Dominar is pretty close to the concept Pulsar CS400. However, there are still a few subtle changes which we thought of capturing and listing for you. Here they are…

Also Read: Why Dominar 400 is a Better Buy Than Duke 390 According to a Duke Owner [Opinion]

Apart from these, there are minor differences like the ‘Bybre’ brake calipers are black coloured (golden on Pulsar), engine crank case cover (golden on Dominar and dark greyish on Pulsar), black handlebar on Dominar (silver on Pulsar), the rear monoshock is more visible on the Dominar and the grab rails are rear facing (Pulsar had front facing grab rails). Moreover, there are minor differences in the way the front bikini fairing is bolted on both the bikes.

So, essentially if you ask me – the Pulsar CS400 looked a little better as it had a better colour coordination. But then these are very minor bits and expect Bajaj to launch these colour themes in future iterations. Anything else which I have missed..?