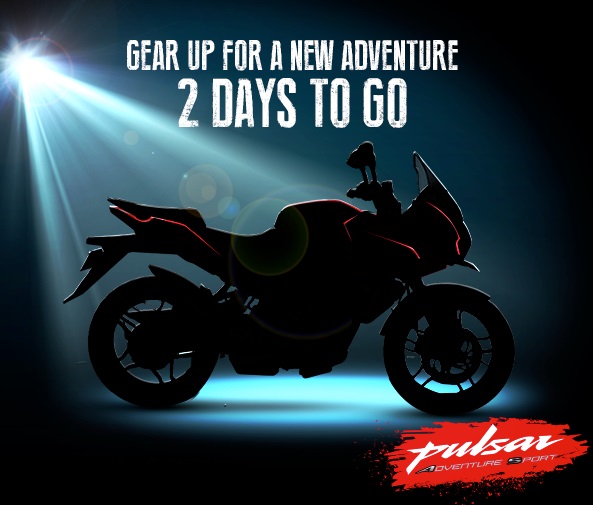 Barely have we finished up with the initial hoopla of the first full faired Bajaj RS200, the Pune based manufacturer has slated another Pulsar launch scheduled for tomorrow. As we shared at our Facebook page yesterday, Bajaj has also teased and confirmed that tomorrow they will introduce the ‘Adventure Sport‘ brand of motorcycles for our market. The motorcycle featured in the teaser they have shared appears to be the bigger AS200.

With this, Bajaj will follow the international manufacturers who generally offer three or more variants – naked streetsport, faired sports and adventure, all based on the same platform. The Adventure category of motorcycles are built for a go-anywhere purpose and it remains to be seen how much of it will the AS200 serve!

Against the RS200, the AS200 will be a carburetted offering of the same 199.5cc single cylinder mill. Power and torque are expected to be the same as 200NS, a little less than RS200. It gets a half fairing, a much needed projector headlamp upfront and a wee bit of other changes.

Interestingly, in its invite to us, Bajaj has mentioned launch of a ‘New Pulsar Range‘. Going by the possibility, they may introduce the smaller AS150 as well. AS150 is the adventure version of the upcoming Next-Gen Pulsar 150NS.

Stay tuned as we will share a launch webcast right here as well as a detailed coverage from the launch venue. Meanwhile you can check Pulsar AS200 pics from a dealership here.