Abhishek has submitted this review in our Ownership Review Contest No 13, ensuring himself an assured prize. The contest also offers a chance to win Riding Jacket, Helmet and more.. You can submit your review to us as well. Here are all the details.

Let me introduce you myself first, I’m Abhishek from a busy scheduled city, Bangalore. Finally as desired earlier I’m almost through my debut of reviewing. Hope you guys enjoy reading this. 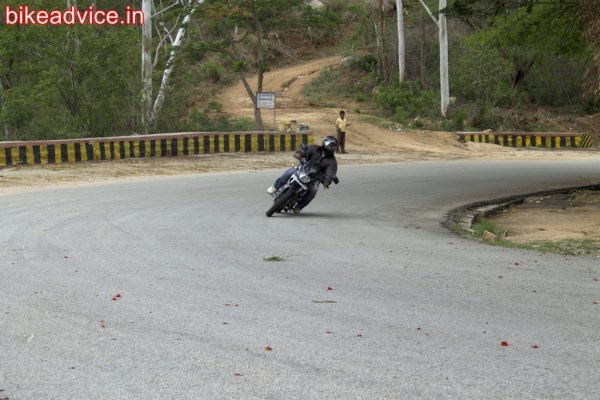 HOW IT ALL STARTED:

Though I wasn’t interested in biking facts and all these stuff before,it all started with my friends.I never thought of getting one to support my riding desires.I used to ride my friends whenever I got a gap to get on with.This irritated me sometimes whenever I had to ask for it.As a result I made up my mind to propose my Dad about the bike.I knew he wouldn’t accept my request as even he wasn’t having one either for his purpose.

The consequence was, I was asked to wait for 2 long boring years to get my hands on with a beast that would unleash my adrenaline. In due time my job was just to dream about which one to opt for.I had 3 options in mind that I could guess I would be happy with,the rtr 180, Pulsar 180 and Karizma-R.The reason behind choosing only these 3 bikes is – I was put a budget barrier of around 80k.After all the relentless requests by me, Dad one fine day gave his confirmation for the bike.

Finally came the time after all my lifeless joy! I had opted to go for P180 ahead of all the test rides comparing each one with other.A simple reason for not choosing rtr180 or Karizma is, a friend who already owns an rtr and karizma is too tall with its saddles for me to get on with ease.I didn’t want to have 2 same bikes in a gang (now people shouldn’t blabber me for this).

Here comes the day whenI had to propose my black angel (book). The one sales executive I got on hold in Bajaj at the time booking is one piece of shit. A serious tight slap to him from my side. At leastI would be happy to take my revenge here. All the time he was only forcing me to go for p150 as there wasn’t any stock of black p180.I was given a waiting period of 20 days.For pulsar this is insane!! Day came when I was accepted to take on with my black beast, the delivery time!!

Here comes the AGRESSION,the rush that I had been waiting for……., PULSAR 180 MIDNIGHT BLACK EDITION! 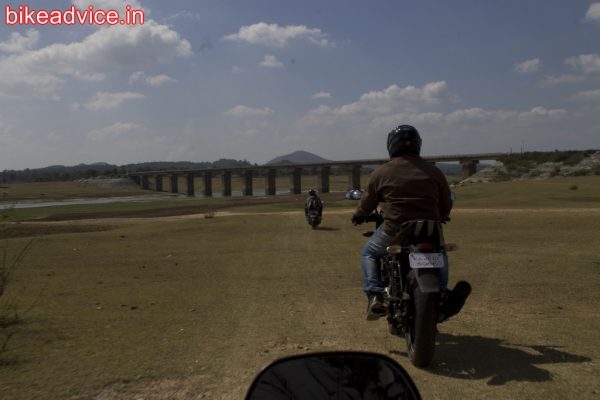 This shouldn’t at all be the section for negative words! I was just thinking of how Bajaj designed this thing with such an appealing title under its case “definitely male”! The styling just keeps you awake reminding you of your bike all time, it’s that handsome and yeah muscular too.

Bajaj has made the most of it to look highlighting. Bajaj imparts toe only shifter for quicker gear shifts. Here are the features which comes on with the existing model of P180.

The bike with all that weight (147 kgs unladen condition) around feels fairly solid in terms of its build quality. The full duplex cradle frame is seemingly sturdy for a bike of this size, weight and performance. Fit and finish is one area where Bajaj needs to work out a lot. Side air filter and battery cover panels fail to have a flush fitting with respect to the fuel tank. Locking the panels into position is a pain as the rubber grommets fail to provide a decent grip on the cover lugs. 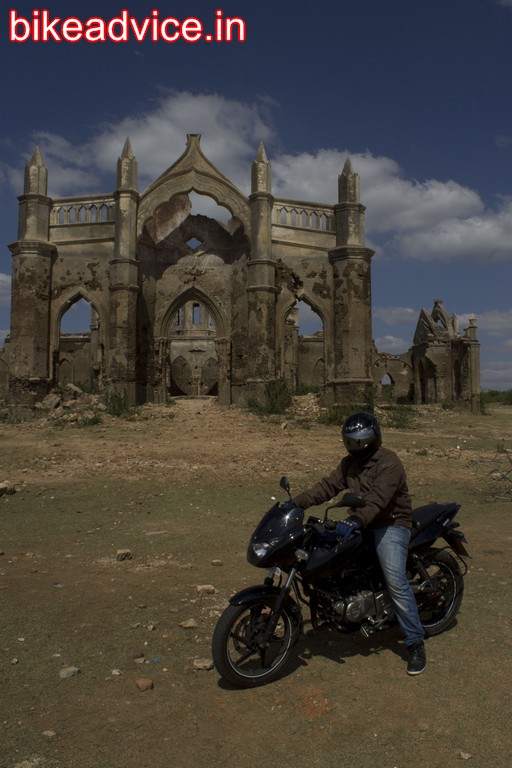 Switchgear is good. It is as smooth as butter. One will never come to the know the gear clutching sound as you see in other bikes. The backlit non-contact type switches are pretty much functional. The self-cancelling turn indicators work brilliantly at all circumstances. Paint quality I feel is excellent. Mine is a Midnight Black and perhaps one of the most popular colours on Pulsar.

The newer version of this bike comes with a sporty seating position as compared to the earlier upright position of p180 model. Riding position and posture is exactly the same as in the 220. The clip on handle bars and the slightly rear set foot pegs provide a sportier ride feel to the bike. It’s just good enough to ride with ease whether it be a city or highway rides. Being relaxed in character it gives you more comfort irrespective of any terrains.

Coming to the handling portion of the bike I personally feel the earlier version of this giant, the one with normal bars possess better handling capability than the newer ones. As the 2012 version incorporates fatter forks in the front it gives a brilliant straight line stability at higher speeds so you need not worry about this part especially on highways. The bike doesn’t let down your confidence level at high speeds.

In terms of cornering one has to work upon their efforts due to the larger wheelbase but once experienced this will be just amazing giving you an excellent control over the bike with fatter rear tyres supporting you in action. Sometimes the centre stand troubles you in the course of action which is negligible I guess. 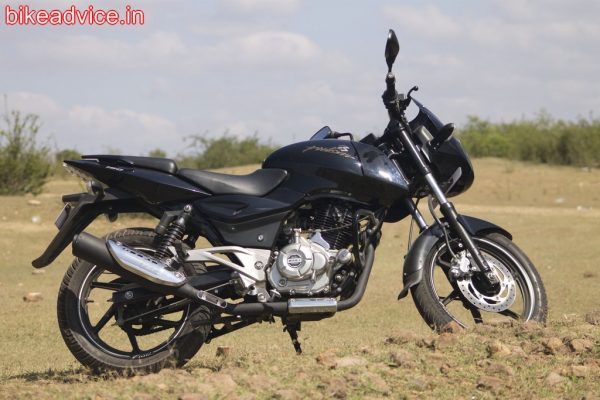 The 260mm BYBRE (by BREMBO) disc brake on the front wheel bites in strong and hard. The rear ones possess drum which I’m not satisfied enough in supporting the front brakes. Bajaj needs to rethink here for providing discs even at the rears. Though it lacks in discs at the rear the stopping capability is excellent and I really wonder how!! But I think that the rear disc brake setup from the 220F/220S is a direct fit on this bike.

The short stroke 178.6cc engine does not exactly make you leap forward as is the case with the 220. It feels like a well behaved engine for the bike which does perform well when pushed hard. This engine has seen a minor power increment of around 0.5HP from the previous UG3 edition that churned out 16.7BHP. I think it must have been done to improve upon the power density of the vehicle since the UG4.5 weighs a lot more due to its beefed up P220 frame and upgraded cycle parts.

The power distribution in this aspect is quite linear and the response feel quite the same in all the gears. The power and torque is felt superb in the range of 6000 to 8000 rpm band and beyond 8K you feel left only with speed as the response gets dull but that doesn’t let you down. This is what the naked street fighters should be characterised upon.

I kept speeds below 50km/h and revs below 4000 rpm during the initial run in stage for about 1500kms to ensure a good run in of the moving parts within the engine.

The P180 UG4.5 has a revised set of gear ratios in the 5 speed gearbox that is shared from the now phased out Pulsar 220. The toe shift with a 1 down 4 up shifting pattern feels sporty and the ratios are a bit too much on the shorter side to my liking. The low end torque is however good enough for city driving. 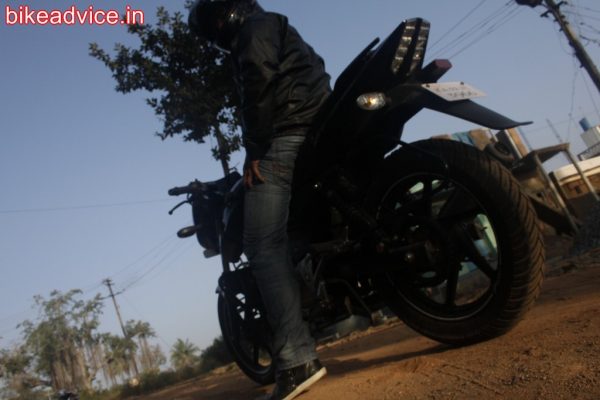 Well I achieved a top speed of 140kmph on speedo somewhere around 10K rpm.I think that’s good enough personally. I believe that the P180 has the smoothest gear shifting quality in this segment.

This is the section where every Indian would be waiting for their much beloved starring question ‘Kitni deti hai’!

Well a machine liable for 18 lts under its head and churning out a healthy raw performance under its crank I wouldn’t expect more than 40kmpl.
Yeah that’s true my bike manages to return me of around 45kmpl in cities and around 50kmpl on highways all in due respect to its rider.

I have got my bike serviced only 2 times and the result is just next to crap! The service guys know only to clean, replace oil and wash.

The Bajaj’s genuine DTS-i oil is not good enough to keep your motor running with ease. Its fine for 1st 500kms but later one can feel the roughness and clicking sound during gear engages. 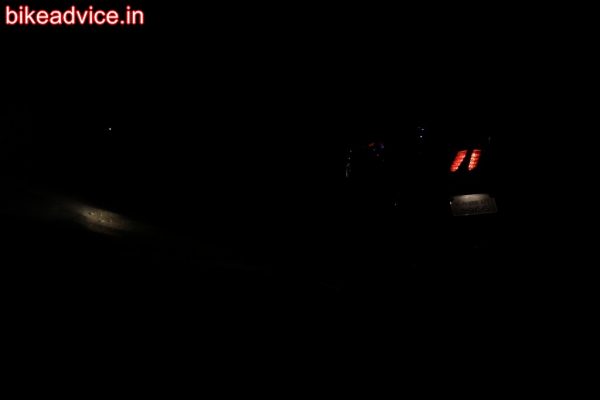 This is the bike with a unique line of performance of its own. A good reliable product from Bajaj. Anyone looking out for an excellent bike with a much refined character along with an absolutely carved aggression in a budget of around 80K as it happened to me this could be the one you might be waiting for.
One could be assured of greater joy and happiness! 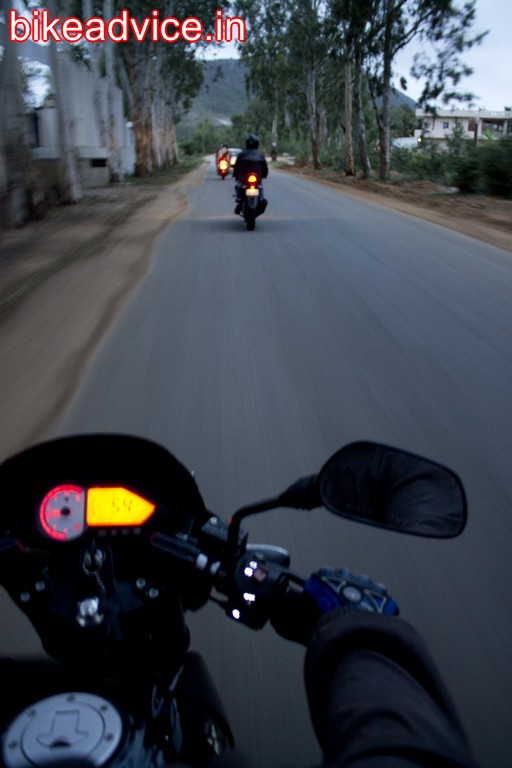 This bike was the perfect choice for me. 11 months down the line since I bought it and there has not been a single day it has given me any sort of trouble. It’s a reliable beast and I hope it would continue to serve me trouble free for many more years to come.

I’m very satisfied with the product as a whole (except for the issues highlighted above).
Rating- 8.5/10

Thanking You For Reading
Abhishek