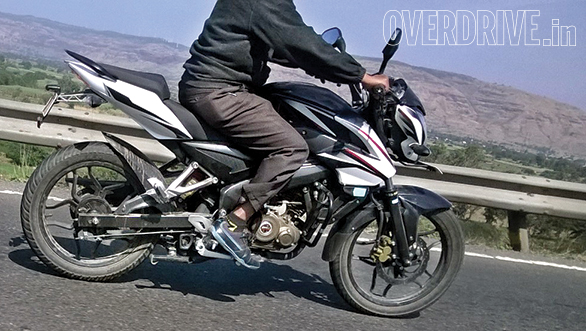 Upcoming Pulsar 150NS has been spotted on tests in India by Overdrive.in but the difference is that this is the first time, it has been snapped wearing what appears to be a production-ready body.

At first glance, anyone can mistake it as Pulsar 200NS speedlines but a closer examination will reveal that the tyre is narrower (most probably 100mm), rear disc brake is absent, kick starter is present and the there is no coolant level indicator.

As we revealed first, Pulsar 150NS will come with a triple spark ignition but there is still a doubt over its engine size. If there is no updated 180 in the making then a 160cc engine makes sense, however, in some international market (most probably Turkey) Bajaj unveiled this motorcycle under the name of Pulsar 150 only, increasing the confusion further. Whatever be the size of the engine, Power, torque, ride-ability, refinement and fuel efficiency are expected to be increased from the current-gen Pulsar 150.

According to Bajaj’s top officials, launch of Pulsar 150NS is scheduled by or before June 2015 and according to our sources, the new Pulsar 150NS will co-exist with the existing Pulsar 150, at least for the initial few months.