Mahindra Two Wheelers has unleashed the cheapest ever variant of the Pantero, and it’s priced at 39,650/- INR (Ex-Showroom Delhi). Customers have 4 variants of the Pantero at their disposal. Here are the details :- 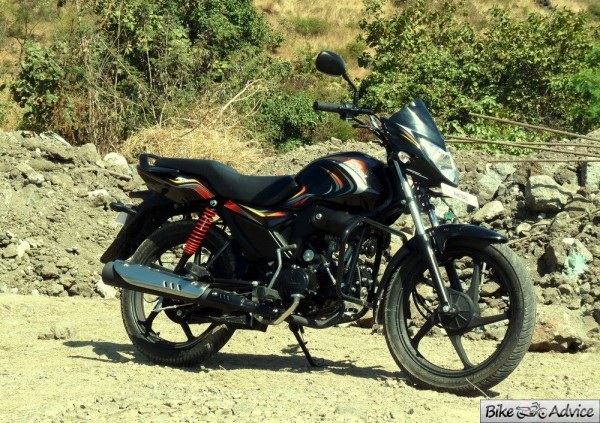 Mahindra Two Wheelers hadn’t really scored much with it’s first offering, the Stallio. Even roping in Aamir Khan didn’t work, and “The Curious Case of Mahindra Two Wheelers” became even more curious. The corporation had swooned us with the XUV5oo, so couldn’t it’s subsidiary roll out good-looking-and-better-working two-wheeled pieces of metal?

Now, the corporation seems to have put all these behind, and it seems determined to “Rise”. They claim Pantero has been rebuilt from scratch at their Pune R&D facility, and hence it will not be dogged by the Stallio’s teething problems.

At the heart of Pantero, there lies an innovative Micro Chip ignited 5 curve (MCi-5) engine. According to Mahindra, this has been developed indigenously keeping in mind the special needs of Indian buyers. They claim it can provide the best-of-both-worlds, a peak power of 8.5 bhp@7500 rpm as well as an ARAI-certified mileage of 79.5 kmpl under standard testing conditions. Seems like Mahindra has scored a high-five with young, first-time buyers who want to go fast and yet wouldn’t like to ruin up their bank balances!

Pantero boasts of quite a few “Firsts” in the Commuter segment. LED Pilot lamps and Tail lamps have never been seen before on Passions-and-Splendors, let alone the large, fully-digital dashboard that the Pantero sports. There’s the usual speedometer and the fuel gauge. It also tucks in a rev-counter along with a clock and a trip-meter as well.

Sporty-looking alloys do fit into the sleek styling theme and the long wheelbase of 1265mm adds to the stability of the bike. True to the beast-of-burden description of this segment, Mahindra Two Wheelers has put the longest seat on the Pantero. At a “long” 774 mm, there are no worries about carrying fatter friends! The ground clearance of 165 mm also ensures that you don’t scrape the underbelly on the nasty, Indian speedbreakers!!

Mahindra Two Wheelers has draped their new creation in attractive livery. It comes in four options – Fiery Red, Sterling Silver, Blazing Black and Cool Black as well. Pantero comes with a 2-year standard warranty, but there’s an option to stretch it by another year.

Check out a quick video review of Pantero