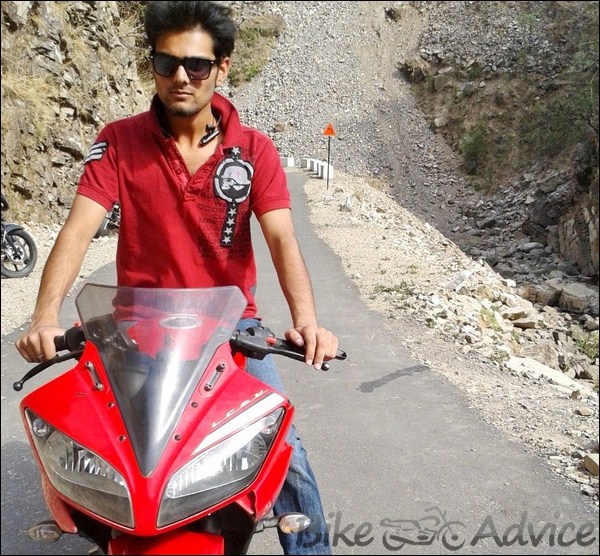 Hello Everybody, my name is Madhur Choudhary and I am pursuing mechanical engineering from a private college in Dehradun. My love for automobiles is, may be, by birth, which increased strongly day by day and brought me to a level that not only my girlfriend but my parents also think that, “I will choose bike over them“!

Well, leaving this personal matter, I should brief you about reviewing my Yamaha R15 V.20 which I own now. The bike was bought on 19 june october 2011 and is the red-black combo colour.

I have already reviewed my Pulsar 220 last year and this is my second review on BikeAdvice. Here is the link for my last review.

Now coming back to Yamaha R15, This bike surely have killer looks, I haven’t met even one person who says it looks ugly. Some might find it sexier from the front, some from sideways and some take it from back. 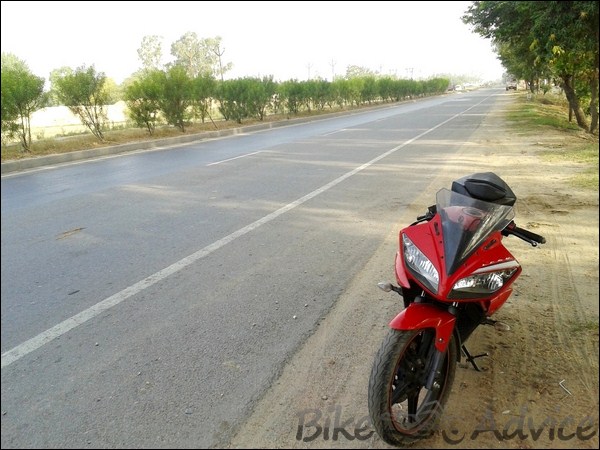 Infact telling truth about my decision for going this bike is its looks only, when I saw it first time on road, I just fell for it. Especially its R6 borrowed looks makes it a show stopper. Though this look sometime become pain for the pillion. There is no support for pillion rider, the seat is really hard. The bike is totally made for rider only and hence its tagline ‘Arrive Alone!‘.

It is powered by a 149.8 cc, single-cylinder, liquid-cooled, 4-stroke engine has a maximum power of 17 PS at 8500 rpm and a maximum torque of 15 Nm at 7500 rpm, figures are enough for a 150cc engine. When I bought this bike, I was really afraid that did I made a correct decision because I always had a perception that according to my height (5’11”) it is a small vehicle. 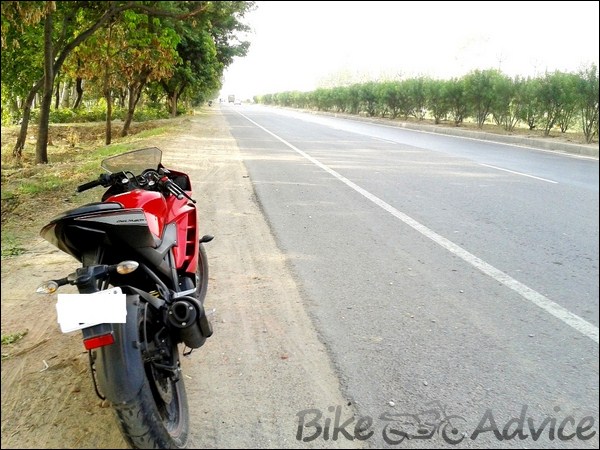 And its position makes my back a hell. But in about 500 kms, I just got addicted to it, and slowly it turned to be one of the best decisions ever made. The bike is now 20,000 kms old, and I am proud of owning it.

Talking about performance, I touched 138 kmph several times. Other R15 friends say it touches 143-145 but I haven’t been able to do that. Really, don’t know the reason, and I don’t care even. The bike gives a mileage of 35-40 kmpl which is quite qood compared to my P220’s 30 kmpl according to its current condition.

The Bike has just 12 litres of tank and that makes me to avoid R15 for long touring in mountains. Also the reserve/ON switch option must be provided for riders (students at least) which drive most of the time with low fuel. 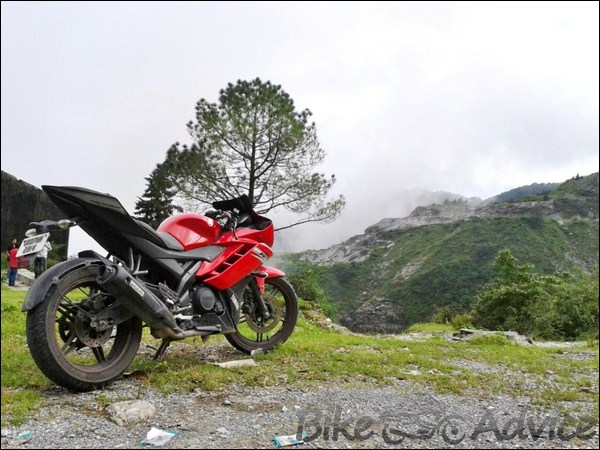 The R15 V2.0 comes with a 6-speed gearbox with the universal 1-down 5-up pattern. I bring the six gear topic because of my incident happened with it. In starting periods, I have a habit of P220’s 5-speed gearbox, and when I rode R15 over high speed, I forget to switch to 6th gear, but eventually with time I realize how useful the 6th gear is during long cruising especially. The gear-ratios are well spaced out and the shifts are seamless though, at times, false neutrals were engaged accidentally.

Handling is unmatchable purely, I can lean down and ride it with one hand and it will not even slip. Ride quality is impressive but due to the reason that I had installed K&N filter in it, it got rougher now and I like it in that way more. The suspension is good but still it could be better according to indian roads.

Braking is impressive, it does not slip much like P220 does but when applying brake really hard, it just rotates by 180 degree. An option based ABS version of it will be an added value to it and can make wonders to braking of the bike. Let me tell you one incident happened to me, which make me a fan of Yamaha’s technology. 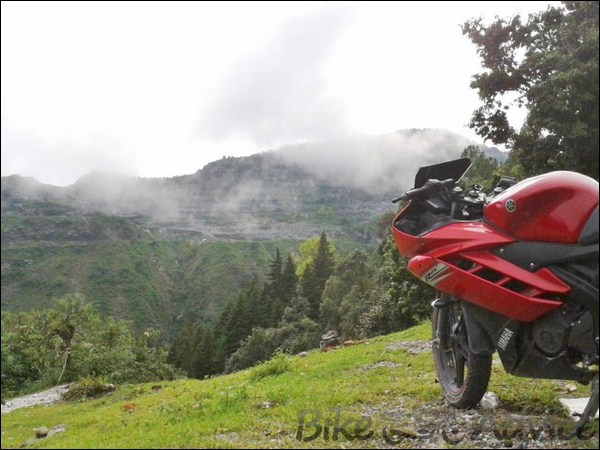 Last year in September, I was going from Dehradun to Muzaffarnagar via Bijnor, and while cruising at 110-120 km/hr, there was a very huge pothole which I hadn’t noticed. And when I rode over it at about that speed, the bike got disbalanced and I thought that I will fall down but, fortunately that did not. I know that if I was in P220 I would have definetly tasted the tarcoal. Hats off to the delta box frame. 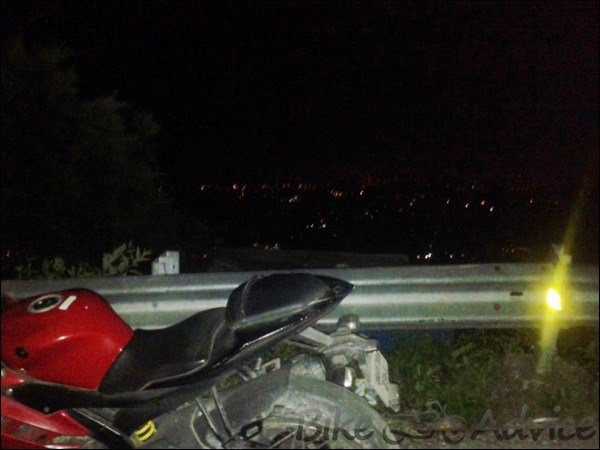 I was always in love with P220’s projector headlamps and was expecting good result from R15 too. R15 lights are brilliant during nights but till only there are no oncoming traffic. R15 lights fall all over the road but still it could be made better.

The Bike truly gives you feeling of super/sports bike with its satisfactory performance; it has eye candy looks, marvelous handling and composed ride quality & stability. But its not a VFM product like the P220, it is definitely a costlier product according to its capacity, little bit small in dimension (for me), and excessive heat produced by the engine when serviced late by just few kms/day than its periodic time table. 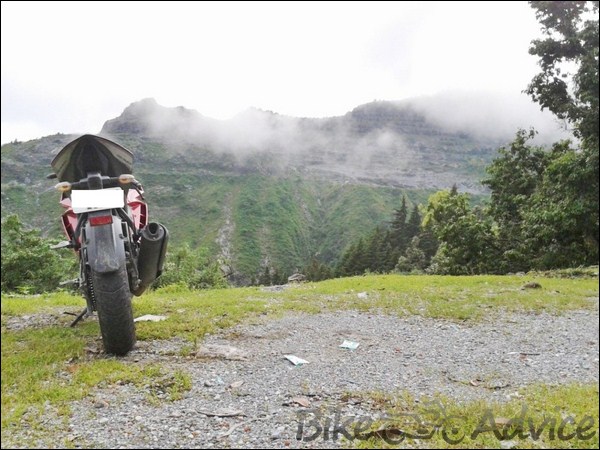 At last, if you are a fan of Yamaha and R15’s looks, and have good pocket, then surely R15 deserves to in your garage. Thank you for reading it. Appreciate your comments and suggestions. And always wear Helmet.