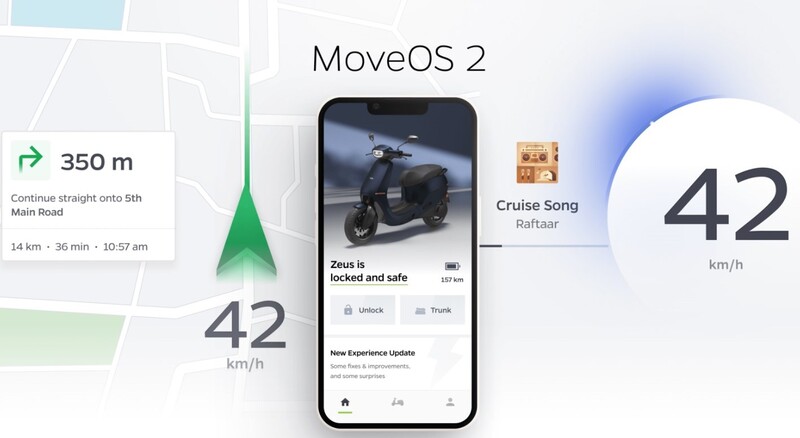 Ola MoveOS 2 update promises some much-awaited features to be added to the flagship electric scooter.. Yet some features are still not here..

So, since the moment Ola Electric announced their flagship S1 Pro electric scooter, they have been promising a plethora of features, which could make this electric scooter a really enticing option among the competitors.

The MoveOS 2 OTA update was originally promised to arrive in April 2022. But, just like everything else in this pandemic-hit world, it got delayed by several months.

However, through their press communication, Ola Electric have finally announced the roll-out of their MoveOS 2 for the S1 Pro electric scooter in a phased manner. The company stated that more than 50,000 Ola S1 Pro customers across India will start receiving the new OTA update in a staggered manner.

According to Ola Electric, the all-new Eco Mode will further improve the real-word range of the S1 Pro electric scooter and will match the previously claimed range of 165 km.

Additionally, Ola Electric have shared that many existing customers are able to achieve a real-world range of over 200 km, utilising the new Eco Mode.

Ola Electric have shared that in some electric scooters, a hardware upgrade might be required to fix the necessary GPS antenna. The customer can “initiate a voluntary update request to resolve the concern” – according to the company.

Cruise Control is one of those features which are currently only seen on the premium motorcycles and even in cars as well. However, ever since the announcement of the S1 electric scooters, Ola have been promising this premium feature for their electric scooter customers.

The MoveOS 2 update has finally unlocked the Cruise Control feature of the S1 Pro electric scooter. The company explains that the Cruise Control can be activated between the speeds of 20 km/h and 80 km/h, in all riding modes except the Eco mode.

Not much to explain here.

The new update has brought the Music Playback feature on the S1 Pro electric scooter which will allow the rider to pair their smartphone to the digital display of the scooter using Bluetooth. Then they can proceed to listen to music, see the song details on the display and control the music while riding or being stationary in traffic.

The rider can access and control the electric scooter through his/her smartphone like locking, unlocking and opening the boot of the scooter, checking the charge status of the scooter, running diagnostics, range across various modes, odometer reading, software version etc.

Yet, the new MoveOS 2 update still doesn’t carry all the promised features. There are still some features still to be implemented on the Ola S1 Pro electric scooter.