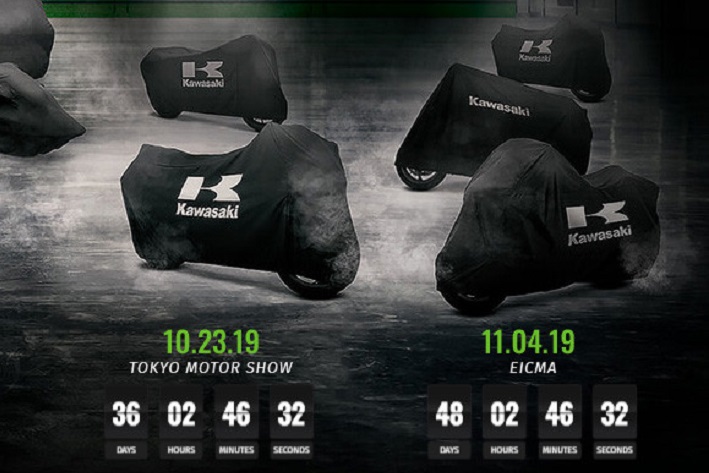 Highly speculated four-cylinder Ninja ZX25R could also be one among these five upcoming motorcycles.

Kawasaki is set to reveal as a many as five new motorcycles by November 2019 according to a teaser image it has uploaded on its portals.

The Jap has shared an interesting blacked-out poster displaying five new bikes covered in wraps. According to the microsite, two of them will be shown at the Tokyo Motor Show on October 23 and the other three will be unveiled at EICMA, Milan on November 4 this year. They have also added a countdown timer on the website.

According to online reports, the most interesting among them could be the speculated Ninja ZX25R, which may get power from a 250cc, inline four cylinder engine. The quarter litre engine is touted to produce 45-46 bhp of peak power which means that it may end up being more powerful than rivals like KTM RC 390 and Yamaha YZF-R3. If this bike is real and if it has any chances of coming to India, expect a humongous price tag of around or over the Ninja 400!

The other motorcycle is rumoured to be the new W800 – a blacked-out version of the current W800 classic (W800 Street was launched in India in July this year), apart from some other changes.

Kawasaki also recently teased a supercharged naked motorcycle and this could be the third motorcycle in this lineup. This means that it could be the naked version of fully-faired Ninja H2, keeping the muscular look and mirror paint finish intact. It is then expected to sport the 998 cc inline four-cylinder, liquid cooled, four-valve supercharged engine. And being a streetfighter, it could be sold under the company’s ‘Z’ range.

Kawasaki may also unveil updates of existing products and there is also a possibility of an electric motorcycle. The wait is not very long…