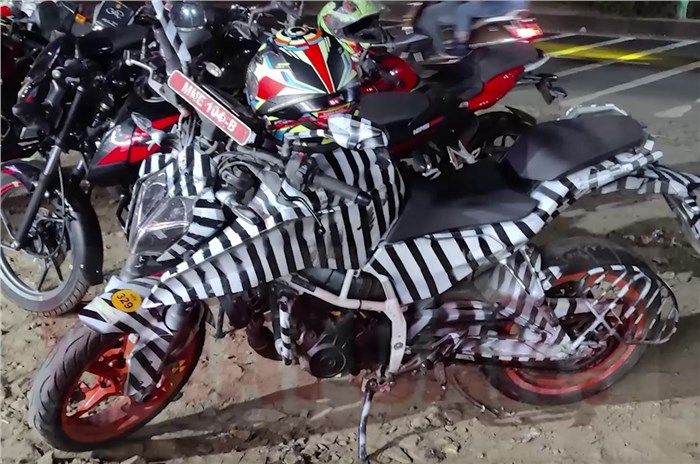 So, after being spied overseas multiple times, and in India last year, the next-gen KTM 390 Duke test-bike has been snapped yet again revealing its closer-to-production form.

Looking at the spy-images, it is clear that the new bike has undergone some serious visual as well as mechanical overhaul. The most prominent change that we can see on the test-bike is the overall design which has clearly been inspired from the big brother 1290 Super Duke R. The look and the presence of the new 390 Duke has been bolstered by more muscular body panels, new tank extensions that are long enough to stretch all the way to the front forks and a new raised tail-section.

Hiding under the new body panels is a revised Trellis frame fitted with a new sub-frame which has a raised profile than the previous model. This new design makes it look like the rider is sitting a little lower on the bike instead of the previous appearance of the rider sitting on top of the bike.

Another interesting change on the bike is the use of a new ‘Banana’ shaped swingarm. This new design of swingarm has recently been spotted on new off-road test-bikes. Many say that this new swingarm has a new profile which, combined with the new off-set monoshock, will provide better ground clearance, stiffness and performance to the new generation of Dukes.

Some of the features we already know will make their way on the next-gen KTM Duke 390 because these have been introduced on the new 390 siblings. The new 390 Duke will get two modes for ABS which will also control the new Traction Control system which is currently offered on the RC 390 and the 390 Adventure. Just like them, the 390 Duke will also get Cornering ABS as standard as well.

The instrumentation will also go through a thorough makeover but expect new graphics, layout and new features.

Coming to the heart of the motorcycle, the new 390 Duke is touted to get power from a slightly bigger engine that is expected to offer better performance and refinement than the current model. It may produce higher power and could get a different tuning to match the characteristics of the bike. However, no specifics of it are known yet!

The new 390 Duke was expected to be unveiled at 2022 EICMA, however, that did not happen. It is now believed to be launched in India sometime this year – most probably towards the second half.

Yes, it will carry a higher price than the current model, just like its siblings. We expect the 2023 KTM 390 Duke to be priced around Rs 3.20 Lakh, up from the current 2.96 Lakh (prices ex-showroom).