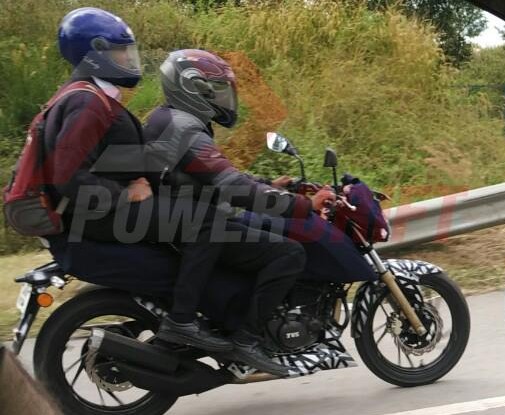 TVS’ upcoming next-gen Apache is back in the news again thanks to a spy shot of the bike shared by a PowerDrift fan. While most of the bike is covered with camouflage, the TVS logo embossed on the crankcase cover confirms that this indeed is product by the Chennai based manufacturer. And going by the frequent confirmations by various TVS’ bosses, this appears to be the bigger 200 cc version of Apache.

The bike shows off a well-defined muscular tank with extensions just like the Draken concept which was showcased at the last Auto Expo in Delhi. It also has a flatter bikini-faired headlamp apart from golden colored exhaust pipe and front telescopic forks.

The under body cowl is bigger and the underbelly exhaust has been replaced by an interesting looking elongated muffler which has a chrome tip. The new Apache also sports petal disc upfront as well as at the rear and the rear tyre profile also appears to be bigger than the current Apaches. 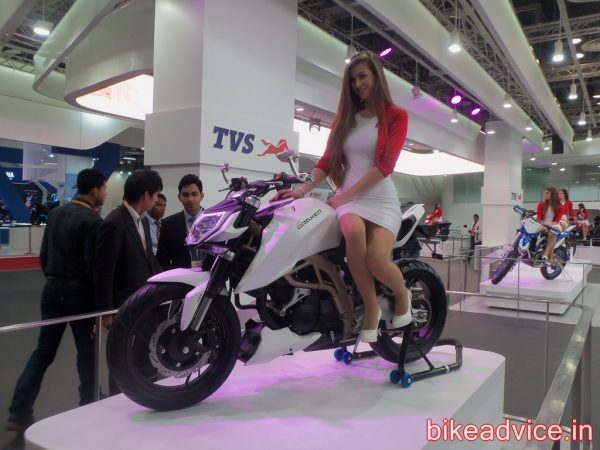 The alloy wheels are a direct lift from Draken and the motorcycle sports a mono-shock absorber, not seen before on the Apache series till now! The outer design of the engine and crankcase cover is different from both the Apache 180 as well as the Draken concept further suggesting that this may be an all-new motor in the vicinity of 200 cc.

While the actual specs and power figures are not known at the moment but considering the performance offered by Apaches till now, we can safely assume that the bike will definitely pack a punch! With TVS joining the 200 cc bandwagon, should Bajaj be wary? BTW launch is expected sometime early next year…