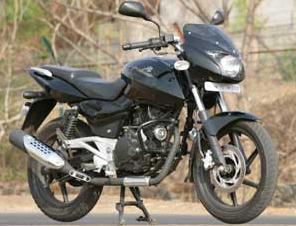 How many of you have actually ripped the Bajaj Pulsar 180? The people who raised their hands probably know what that bike is made up of! Personally speaking, Pulsar 180 is the best bike from the Bajaj’s stable. The earlier variant was synonymous with raw power and this variant just takes the game ahead.

Contrary to what other manufacturers do, Bajaj believes in giving value to each and every penny spent on its bikes. On the same page, this bike is around two thousand rupees costlier to the earlier version. Here is the list of what you get after paying more money.

This is not the end of the long list of goodies offered! Many would feel that the resistance would increase with fatter tyres. A Big No! Bajaj has reworked and tweaked the engine to a greater benchmark. The engine now produces 17.02 Ps from the same 179cc mill from the 16.5 Ps produced in the earlier version. Added to that, the valve timings along with the silencer have been retuned and the bike gets a new character.

Talking about the performance of the bike, it is a little slow to reach 60 compared to the earlier version but after that it becomes faster and feels as smooth as it can get at higher rpms. Moreover, the bike incorporates a new set of sprockets- both front and rear. The bike runs on 14/39 as compared to 13/43 which it earlier used to sport and this seems to be the reason of the bike not loosing out on the performance figures despite sporting fatter tyres, weighing 5 more kgs at 147 and loosing out 1nm of vital torque which remains an unanswered question as to what could be the reason for shedding 1 nm of torque. Mileage is also expected to be in the range of 40kmpls plus under normal city driving.

Considering all this, Bajaj engineers have done a commendable job with the machine taking it to newer benchmarks of refinement for them to beat in their own subsequent bikes. And their designers need a special mention because of which the bike is an eye candy to watch at the same time maintaining the menacing look of the traditional pulsar. The bike comes at a time when pulsars sales are seeing a downward slide after ruling the roost for more than 7 years and it sure promises to be a bike which could revive the sales of pulsar.

This bike remains the undisputed value for money bike in the market considering the plethora of goodies it offers at such an affordable price. With this bike, Bajaj has upped the forte and set the stage for its bigger brothers to steal the show! Already the pulsar siblings have been very well accepted by the people which is evident from the 1,65,697 bikes it sold in May, 2009, the month which saw the launch of both the siblings. Already there is an announcement regarding the ‘fastest pulsar yet’ from the man himself, Rajiv Bajaj in June, let’s see what Bajaj exactly is upto….