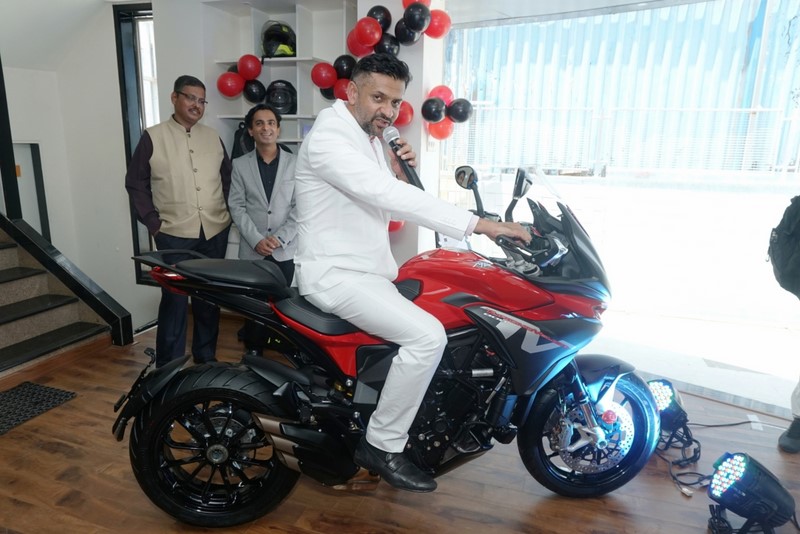 Kinetic’s Motoroyale has introduced a new motorcycle in its range – the MV Agusta Turismo Veloce 800. It is calling the gorgeous motorcycle as a ‘luxury‘ tourer.

MV Agusta claims the bike to be the only tourer with a counter rotating crankshaft motor which allows it to reach a top speed of 230 Km/h. The gorgeous looking Italian marvel is built around a steel trellis frame, suspended by Marzocchi USD forks in front and a Sachs monoshock at the rear.

This tourer sits on 17-inch alloys and is equipped with a 120-section tire, twin 320 mm discs at the front and a 190-section tire, single 220 mm at the rear. It is also equipped with an electronically controlled suspension setup, 8-level traction control, rear wheel lift-up mitigation, heated grips, cruise control and panniers.

The motorcycle has been launched at Rs 18.99 lakh ex-showroom whereas the first three customers can ride it away for 16.99 Lakh – an early bird discount of 2 Lakh. The bike manufacturer describes the bike as a mix of its racing soul with a touring bike.

It will compete against Triumph Tiger 800 XRx and Ducati Multistrada 950 – all of which are a lot cheaper in comparison.

Like other MV Agustas in India, Turismo Veloce 800 will be available at the Kinetic Group’s Motoroyale showrooms across India which has increased with the new Navi Mumbai dealership which was inaugurated on the sidelines of this launch.