Meet Santosh Kumar from Mysore, He currently holds two limca records and has also taken part, twice, in the Himalayan Motorcycle Rally. He is a bike builder who has built something unique to show the world. It is one of the smallest electric bikes ever built and is certainly the smallest one in India, one that has been featured in several magazines and newspapers. His passion for bikes dates back to his early days courtesy of his dad who loved bikes. As a child he always wished that he had a motorbike small enough for him to ride happily, but because financial limitations at the time, the dream was left unfulfilled, he decided that it was a dream he would convert into reality even if he grew up. The results obviously speak for themselves. 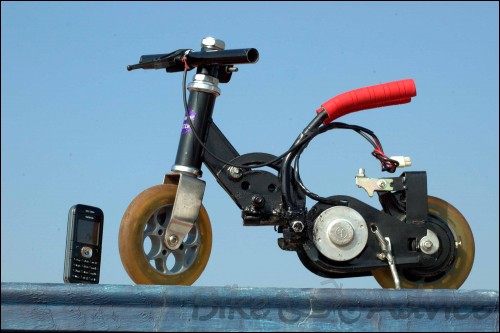 He calls it the Moosshiqk which means mouse in Sanskrit. It’s a completely electrical bike with a 24v DC setup that has enough power to carry a person with relative ease. Fully rechargeable and extremely portable, this is one machine that is truly amazing, a fact that has reinforced by the fact that magazines like BikeIndia (April 2008) and Overdrive (April 2008) have both featured this little wonder with rave reviews.

It weighs in at just 4 Kilos and is so mechanically simple that it can be split up and joined back together in just about a minute. It can carry an adult person weighing up to 62 Kilos for 15 minutes, with a top speed of about 15 Km/h. If you are wondering about the dimensions, its just 30 Centimetres tall and 45 centimetres long. The power is supplied with the help of two 12V DC batteries which can run for about a kilometre on a full charge with 1 person. People who see it, often don’t believe that it can actually haul a fully grown adult. 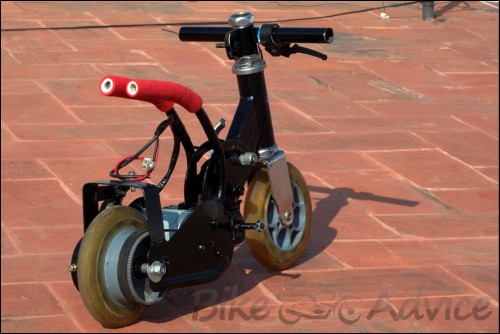 He has fabricated a lot the parts himself including the handlebar and the frame; other parts like the wheels have been taken over from cycles and e-bikes. The bike also features a back brake and can also be fitted with indicators, headlamps and other electrical at the cost of battery life. Total cost for building the bike amounted to just 12,000 rupees. 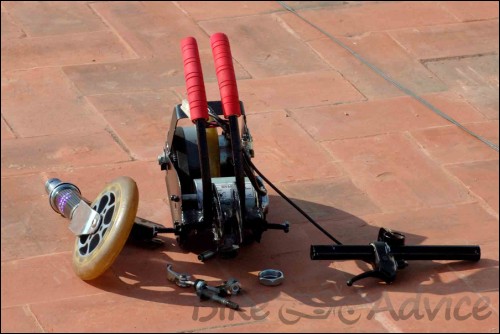 What We Say: Mr. Santhosh has definitely created a unique piece of machinery, one that proudly stands in the Limca book of records; we definitely think that he has achieved something that is marvellous. It isn’t the most practical bike ever built but it has something that’s important in any bike and that is character, this is what differentiates it from any other machine, its tiny size along with its capabilities surely make it one of a kind. We positively hope to hear a lot more from him in months ahead and certainly wish him all the best.