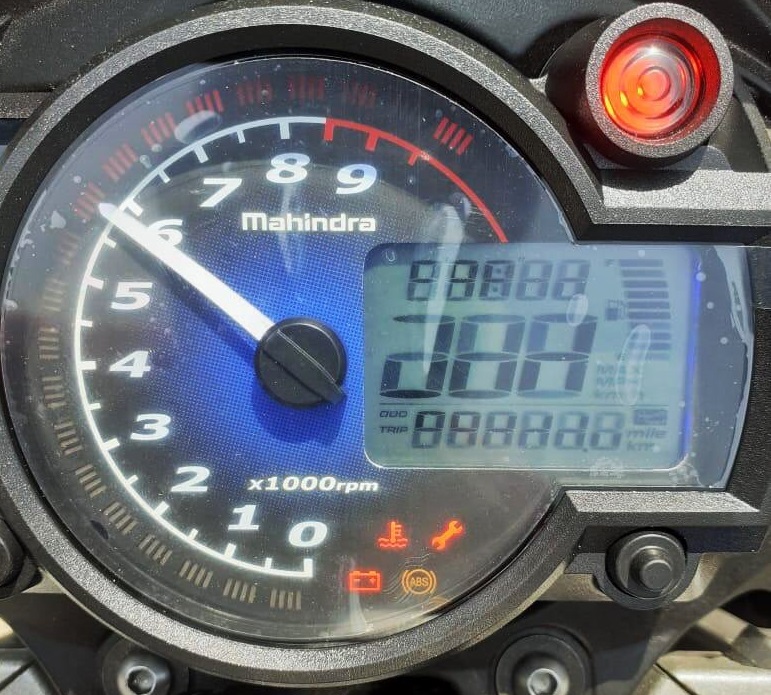 With the oncoming of Jawa, clearly, Mahindra has kept its Mojo (the motorcycle) in the back-burner. Many years back they had promised to launch as many as four new Mojos in the market, however, not one has been introduced yet (related report).

Forget the new motorcycles, even the Mojo ABS has not been launched yet which has limited the already low sales of the motorcycle in the market. According to the new ruling, from 1st April 2019, no manufacturer can make non-ABS motorcycle (of over 125cc).

It is well known that Mahindra was actually testing the Mojo with ABS as early as (at least) last year, however, everyone was puzzled about its whereabouts. However, a new spy pic has revived hopes…

According to a tweet from a biker named Rakesh Kumar, Mojo ABS is finally coming. He has posted a pic of the instrument console as a testimonial to his claim (the featured pic of this story). Among other features like service due indicator, temperature, battery, the console features a clear ‘ABS‘ light confirming the presence of the safety tech in this particular mule.

It is being widely believed that Mojo will get a proper dual channel ABS but we can not really be sure about it since Mahindra has had a “cost cutting” approach for the Mojo. In fact the test mule spied last year was also the cheaper UT version.

After Jawa, CEO Confirms BSA Launch in India But NOT Soon

How soon will we get the Mojo ABS is still a point of conjecture but considering the fact that it will be very unfortunate for Mahindra as well as its standalone dealers if there is a break in between, we hope it makes way into the market sometime soon.