Earlier we had featured Melroy Alphonso on your BikeAdvice for completing the SaddleSore 1600KM ride on his Yamaha FZ16. Melroy has now been featured in America’s IronButt magazine and in doing so he became the first Indian biker to be featured in their magazine. 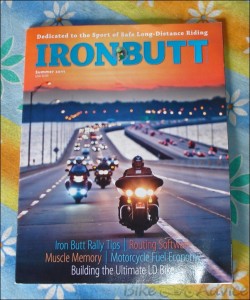 Motorcycling has always been a passion for me and I love to travel to far off distances and get away from the hustle of city traffic. I find riding through villages and the countryside to be therapeutic, relaxing and soothing. I feel it also helps me become one with nature. I used to ride only a few hundred kilometers but as time progressed, I graduated to riding longer distances that covered many different states in India.

While surfing the Internet one day, I came across the Iron Butt Association. I thought about how fun it would be to up the ante and attempt a SaddleSore 1000. At first it was only a dream, but overcoming the many difficulties made the challenge more appealing. On paper it seemed so easy, calculating what it would require to complete this challenge by maintaining an average speed of 66 km per hour. I thought riding a 153cc Yamaha FZ16 on Indian roads would be the toughest part to overcome.

After making all the necessary arrangements, I topped up my fuel tank at 7:52 am on November 23rd, took a petrol receipt as proof for documentation, and my SaddleSore ride began.

I started by taking the Western Express Highway in Sion (Mumbai) that connects to the Golden Quadrilateral. This route took me across to Gujurat and Rajasthan. The journey on the Golden Quadrilateral is much better than riding on the national highways; it is a four-lane high- way, which makes it easier to overtake slower vehicles and allowed me to maintain a consistent average speed. 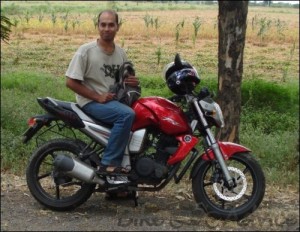 The Yamaha FZ16, known outside India as a Yamaha Byson, was fun and the extra wide 140mm tire provided fantastic grip and stability. The only stops I made were to refuel. I enterd Rajasthan and finally reached Eklingji at 7:26 pm. I was glad to have made it half – now I just had to made it back to Mumbai in one piece.

The roads in India can be dangerous at night, especially the bright lights from oncoming cars and trucks that can easily blind you. Insects were also a problem and I had to regularly clean my face shield as well as my headlights to maintain maximum visibility.

When I reached Surat (Gujurat) at 3:40am, I was very tired and did not know if I would make it back to Mumbai. My odometer showed. I had covered only 1363 kms. Continuing on, I eventually reached Mumbai and made it to the Western Express Highway as my 24-hour clock quickly ran out. After a frantic search, I found a petrol station only to discover that the credit card machine was broke. At 7:50 am on November 24th, I it! I had completed 1650 kms right in the nick of time – 23 hours and 56 minutes. Perseverance finally paid off for me.

Melroy Alphonso was the sixth rider to complete this grueling ride in India where, by western standards, traffic is so congested it’s often mind numbing. His ride on a 153cc single- cylinder Indian-made Yamaha got him appointed to the Not Right Riders list! – IronButt Magazine