Mahindra Two Wheelers’ G101 was being referred to as the ‘Zesto’ all this while, and the company finally announced today that its latest scooter will be called ‘Gusto’.  Though I don’t want to comment on the choice of name but with Tata and TVS already calling their latest offerings ‘Zest’, a Zesto would have sounded the least, er.., zestful.

According to Rajesh Jejurikar, Chief Executive, Farm Equipment & Two Wheeler Division, and Member of the Group Executive Board, ‘Gusto’ symbolizes the ‘spirit of freedom’ as the nomenclature has been derived from the word ‘gust’, which means a sudden and strong current of wind. 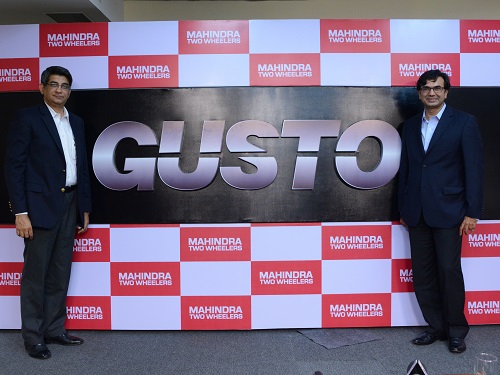 He also added that the scoot will feature an all-aluminium M-TEC engine which boasts of a stronger crankshaft and bearings, high-inertia magneto, high-energy HT coil, and a series regulator to deliver superior power, efficiency and reliability. As per Jejurikar, Gusto’s design has ‘its origins in Italy’ and a lot of research and customer feedback has gone into it as well. He went on to say that the scooter was put through a lot of testing, which is something that we agree with wholeheartedly. The two wheeler has indeed been rigorously tested – those excessive sightings of the test vehicles giving enough reason to all to vouch for that! ,

Mahindra would be launching the Gusto on September 29 in the northern and western parts of India, and in Nepal too, while the southern and eastern markets of our country will have to wait for a few months as the Gusto will be sent to those regions at the same time the export units are sent to South Asia, Central America and Africa, in a few months.