So today we are dealing with a motorcycle which essentially was to be launched back in 2010 or 2011, was delayed and only after a five year hiatus could make it to the market but in an all-new avatar and a testing regime which would have covered at least the Northern Hemisphere. The name is MOJO – a peculiar identity but something which is easy to pronounce and remember.

There is a common misconception that Mahindra was testing the Mojo all through these years and its definitely not true. Mahindra had put the bike in the backburner after its showcase and was waiting for some stability to their brand sales to venture into a niche which would not have brought them a lot of volumes. I always think top-down approach would have been a better ploy for Mahindra but than that’s a thing of the past. Actually ‘Mojo’ is an English word and means “influence by magic power“… So.. does it? 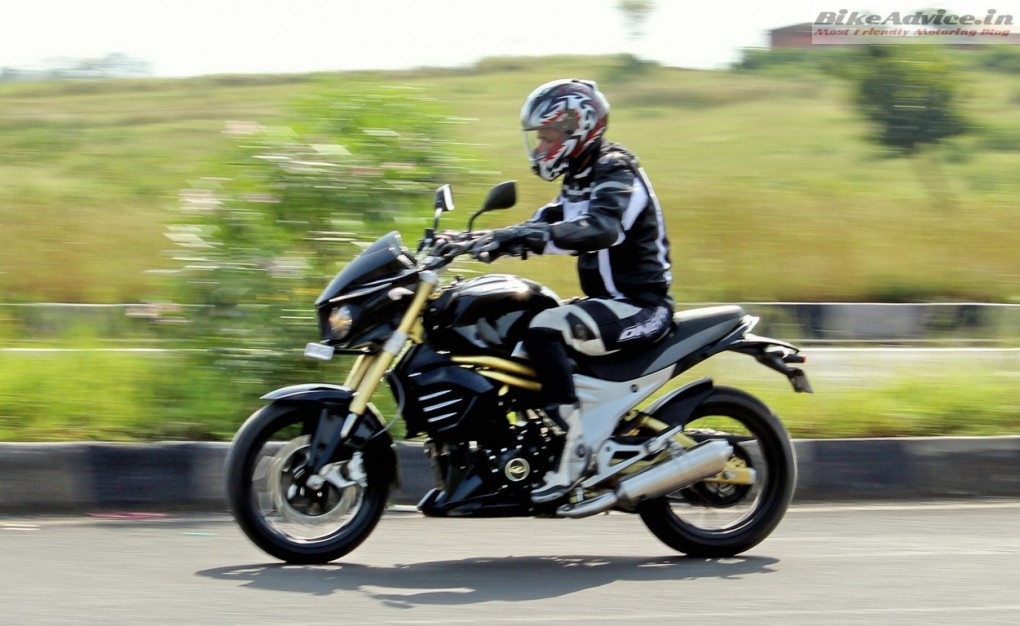 Mahindra invited BikeAdvice to sample their premium-most motorcycle in Mumbai and the ride was scheduled to go to Igatpuri and back. For all of you who are unaware about the terrain, this involved riding through the freaking terrible Mumbai city traffic, on to a not so likeable patch of highway and the remaining part which was as enjoyable as anything! In all, I covered a distance of over 300 kms before handing the keys back to the company folks. As I venture into a long trail of paragraphs, here is a quick summary of its performance..

*all Speedo readings and as tested by us

When it was introduced back in 2010, Mojo carried a very confused styling. It was not muscular and something which was easy to write down and I am sure it would not have worked in the market. Here is how it looked back then… 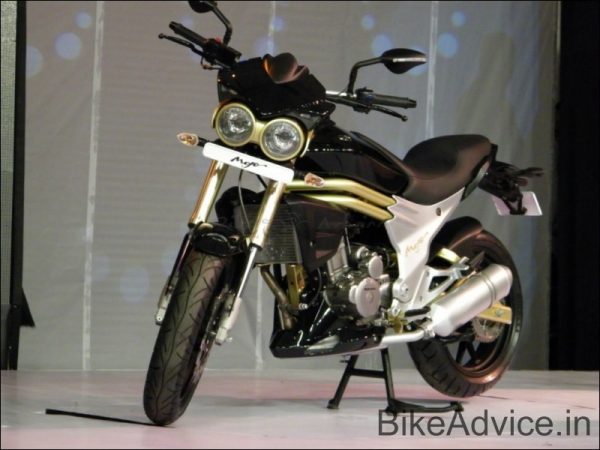 And here are both of them together, showcasing the evolution… 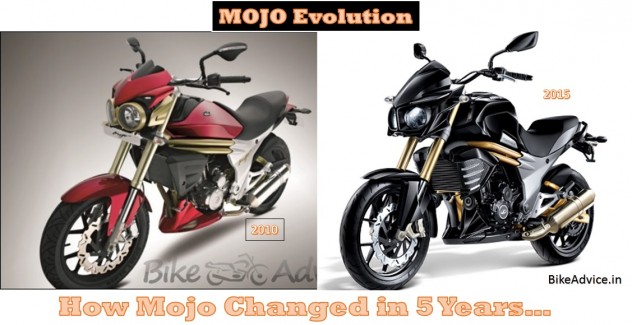 Mahindra got the feedback and worked on its design and the final production motorcycle is, to me, a fantastic piece of work. The company defines it as a ‘predator-like’ design and in essence, it looks aggressive and fairly big in person. We got the gist of the acceptability during our travel when the crowd, whenever or wherever we stopped, gathered to have a good look at ‘the thing’ we were riding.

It is a front-heavy forward-high design with a short tail. The twin-pod headlamp has been carried over but it has subtle changes. It gets eyebrow like LED strip and is slightly modified. The good part is that it has been bolted at a lower height which should be the case with every naked/bikini-faired motorcycle. The high-raised tank lends it a muscular stance and the curves carry-over to a single-unit dual-tone seat. The tiny tail-lamp is a 12-LED unit and the rear mudguard also acts as a design element. 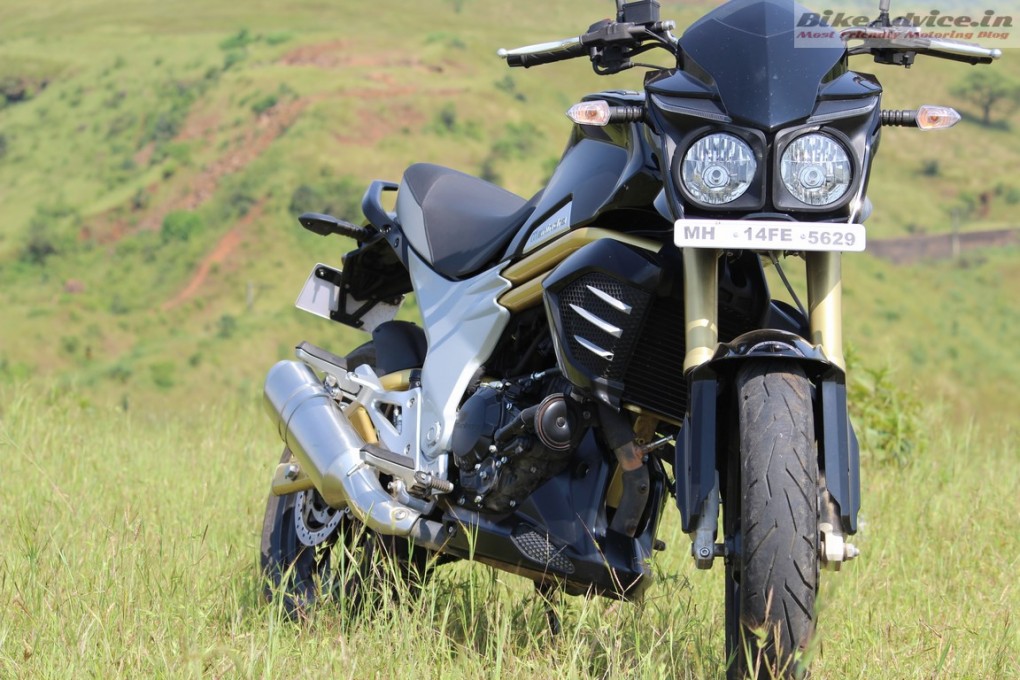 The chunky golden-colored upside down forks and characteristic chest ribs add character and then there are the 1 x 2 exhaust canisters from the single cylinder engine (which add weight but Mahindra says, result in a bassy sound). In short we could not find much fault with the overall styling of the motorcycle. According to the perception I have built, if you are the one who dislikes it, then you probably belong to the remaining 25 percent of the junta.

So Mojo is promoted as a tourer and quite rightly so by Mahindra. The 295 cc is a Liquid Cooled single cylinder DOHC engine and the power of 27 bhp peaks in at 8000 rpm but more importantly its the 30 Nm of very usable torque (tops at 5500 rpm) which has more significance here. To put it in perspective, this is 7 Nm more  than its immediate rival – CBR250R, and peaks earlier as well… 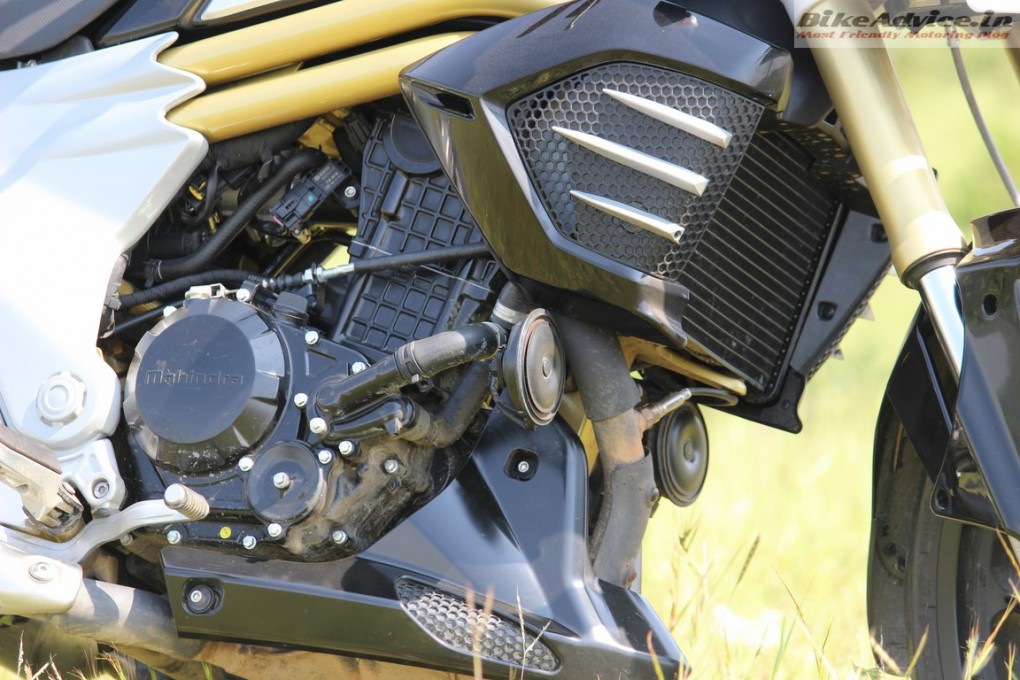 Next, I should put in a word about the refinement of the engine. For some hard-working reason, Mahindra’s engines since the Gusto (including it) have some butter-smooth feel to them. And no, on the Mojo it is not lifeless as like the one on the Unicorn; in fact it has its own character. And the smoothness remains almost all through the rev band which also includes mid-high rpms. Only on higher rpms they interfere but they are very very well contained and do not intrude into your riding nirvana! 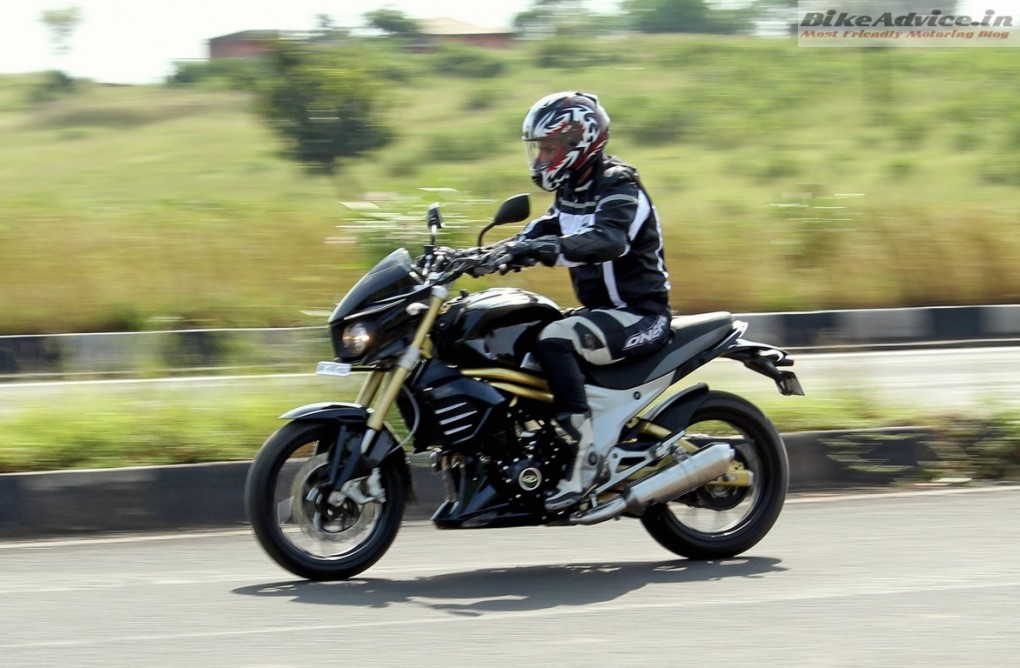 It is not a stonker of a motor wherein you flip the throttle and it goes berserk, like, let us say the Duke 390. It has a more matured behaviour – keep it or blip it over 4500 rpm and it will go down gunning the highway in a controlled manner, like how a tourer should behave! It does not have the urgency but that progressive feel is what makes it an ideal long-distance motorcycle. Mind you, this does not mean any lax in performance, instead, it is in abundance, specially the torque which never lets you down. Overtakes and ghats just need a twist of the cable and you would be delighted by the way the motorcycle responds.

The engine redlines at 8500 rpm and it cuts off at 9000 rpm. Mojo is one machine on which you can cruise all day between 100 kmph and 120 kmph, based on the terrain and road you are riding on. 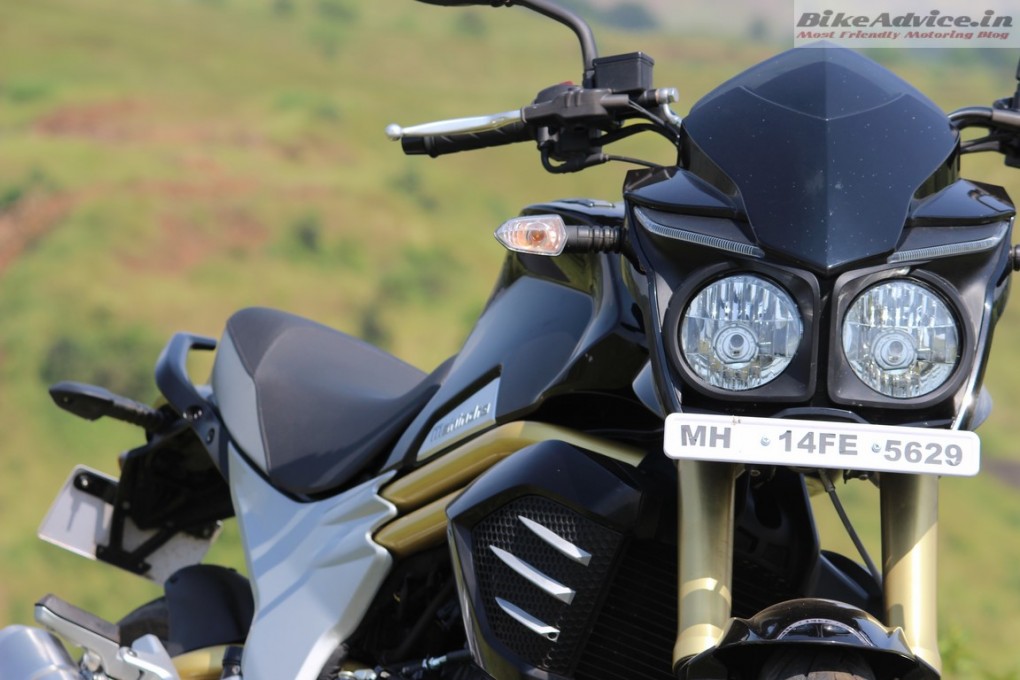 However, it is not a very efficient city machine! The engine is not very happy strutting under 4000 rpm and that long wheelbase doesn’t help matters a lot. The Fuel Injection, which Mahindra says has been sourced from Italy (not sure if it is the same Ducati one which the 2010 Mojo advertised), also behaved erratically a couple of times. The good thing even in our city-ride when we can move only a few inches per minute, was the well-controlled liquid-cooling of the bike. It did heat up emitting a few fumes on our legs but never did it go uncomfortable and this during the peak city hours of Mumbai traffic. 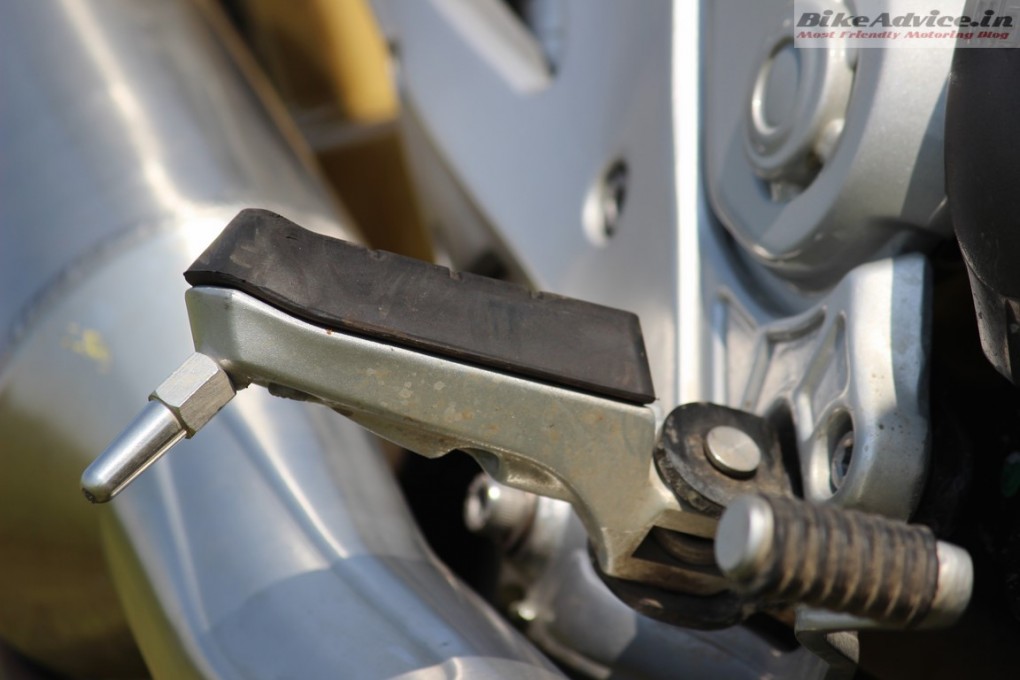 The 6-speed gearbox is a fairly slick unit with a well sorted spacing however, we did encounter false neutrals at least a couple of times. The feel (of gear-slotting) is more like Bajaj and the precise shifts like Honda are missing but then we will give it to Mahindra considering the smaller time they have been here for.

Mahindra has carried over the Pirelli Diablo Rosso 2 tyres from the prototype and believe me they are super-sticky but more than that they imbibe the confidence of pushing the bike harder. Ride quality is phenomenal and the motorcycle with that beefy suspension eats up potholes with aplomb (much better than the Dukes, if you want a reference). At high-speeds the motorcycle is very stable and composed only marred down by the sub-quality braking, which is surprising actually! 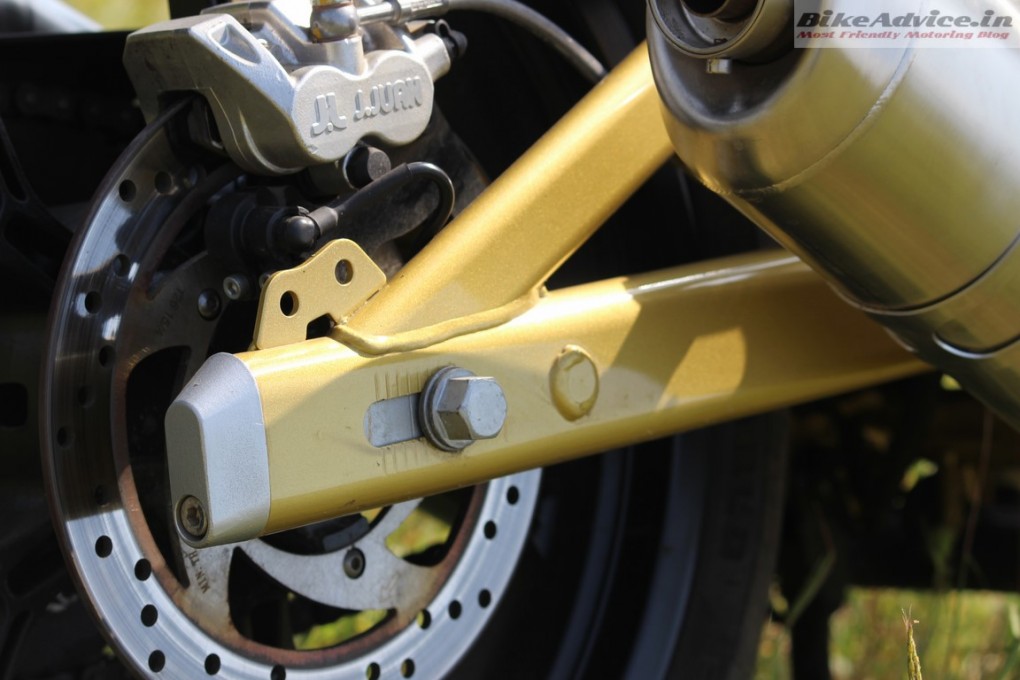 Mahindra is using the segment-largest disc brakes (320 mm upfront and 240 mm at the rear) which are sourced from a Spain (Barcelona) based company called as J.Juan, which supplies to Kawasaki as well possibly among other biggies. The problem with the brakes is that they lack bike and though Mahindra says they have intentionally kept them ‘progressive’, the reassuring feel is missing! But we are sure this is something rectifiable and Mahindra should be able to get through this easily.

ABS is not available at the moment however, Mahindra officials confirmed that an ABS equipped Mojo is under works and will be launched depending upon the market and acceptability. We expect a lead time of around 5-6 months from now at least. At the time of writing down this review, a test mule has also been spotted. 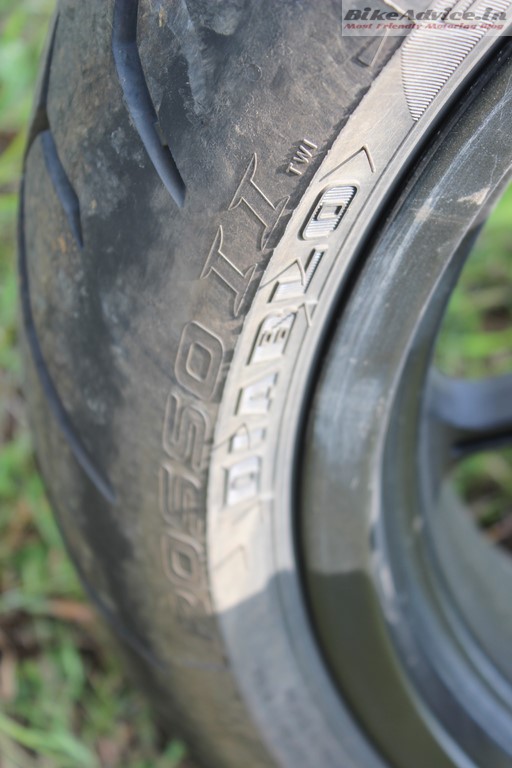 Mojo handles pretty well on long roads and fairly decent on corners, however it has a larger turning radius apart from NOT being very flickable in cities. Wind-blasts are definitely present and we hope Mahindra offers an Avenger-like visor as an optional accessory sometime later. Another issue which we observed was the closing-up of RVMs at high speeds. Whenever we crossed 120-130 kmph on the speedo, the mirrors started collapsing.

Mojo: Verdict: Your Tourer is here!

Mahindra has launched the Mojo in three colors and the price tag has been increased from Rs 1.58 Lakhs to 1.63 Lakhs ex-showroom in Delhi, recently. This places Mojo as a Rs 1.8 Lakh+ on-road motorcycle which is where the whole fun is.

Based on my first ride experience, I must say it is an honest effort from Mahindra, one which has all the makings of a very comfortable tourer. Since we are talking about comfort, let me iterate that Mojo would probably be one of the very few motorcycles which I have ridden for about 140 kms at a stretch without an iota of pain or discomfort anywhere. For all of you who consider touring as a road-enjoying activity rather than blasting-the highway one, you should definitely check out the Mojo. 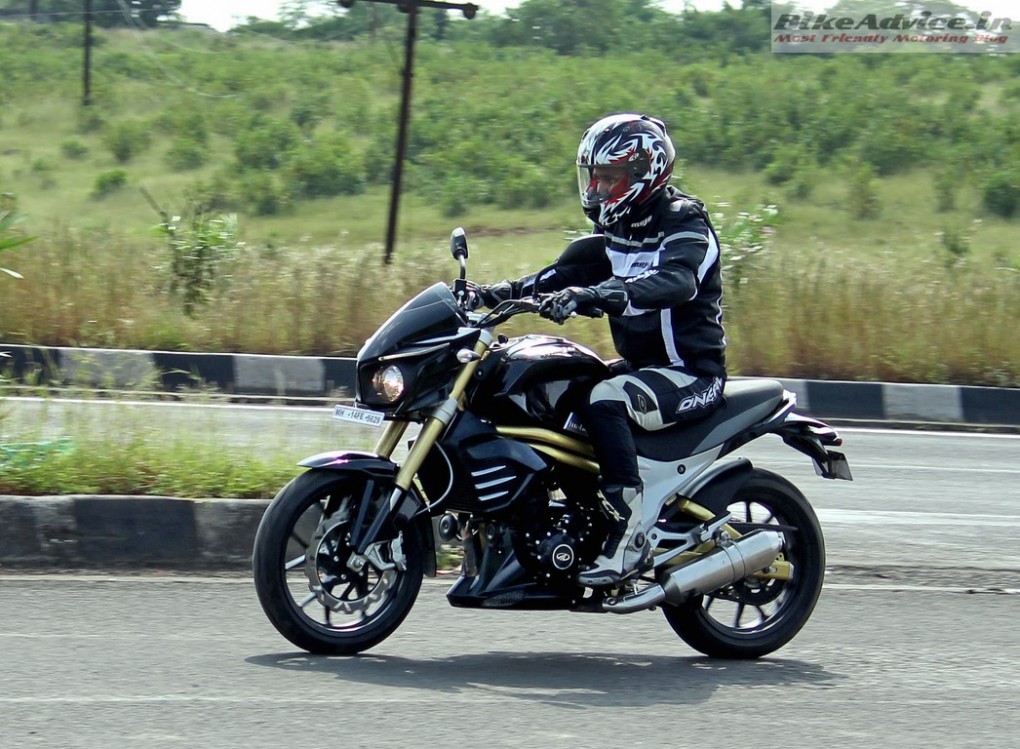 On the Mojo you can enjoy the serene offerings of nature in comfort and whenever required you can outrun that wannabe Royal Enfield guy or that bully truck just ahead of you. In terms of road-presence, let me tell you that there was a lot of interest in the motorcycle and a lot of blokes on their R15s, Gixxers, RS200s etc chased us just to get a good view of what is on offer. Here is a glimpse of that… 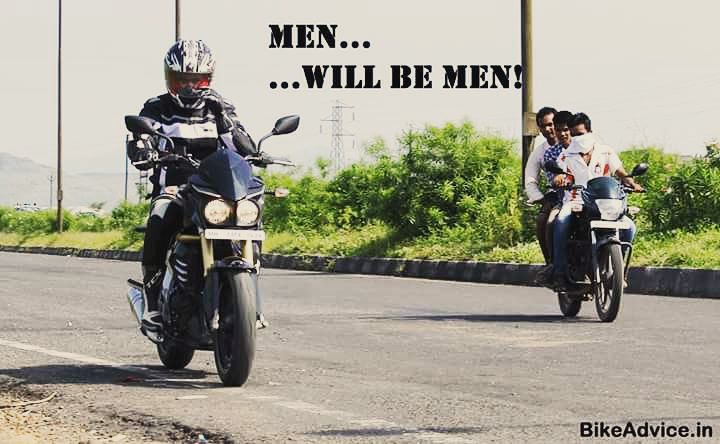 It does have its share of minor issues, but be assured nothing is a deal breaker. Mojo is available in four cities at this moment and Mahindra informs that it will be launched in a phased manner across the nation. And if you have been waiting to hear that word – yes, Mojo is a better motorcycle than CBR250R on a lot of counts, based on my first ride impressions. I will share its fuel efficiency, long term durability, in-depth details when I or someone from my team takes it for a comprehensive review… Till then enjoy the following walkaround video and pictorial view of the motorcycle…

Check out the 82 Pic Gallery of Mojo