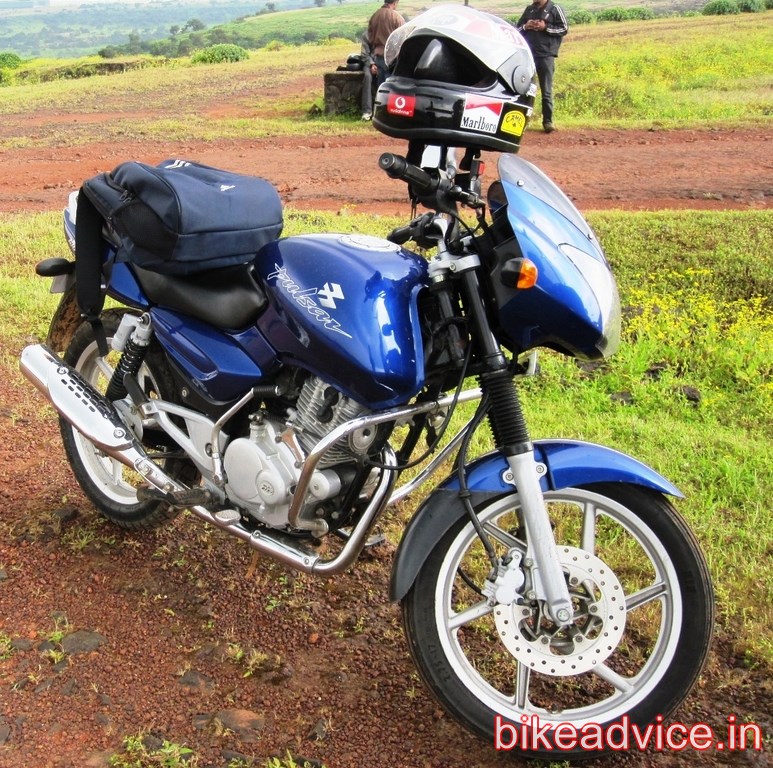 Anuj has submitted this review in our Ownership Review Contest No 13, ensuring himself an assured prize. The contest also offers a chance to win Riding Jacket, Helmet and more…Here are all the details.

Hey you wheel crazy folks out there! I hope you are doing very well today. This is Anuj from Maharashtra (Pune), another wheel craaaaaaaaazy. Sometime during Diwali last year, while I was taking my regular dose of news in world of wheels, I came across this fantastic website called BikeAdvice. Since then, every single day it has been keeping me connected and updated to the entire biking arena of our country. 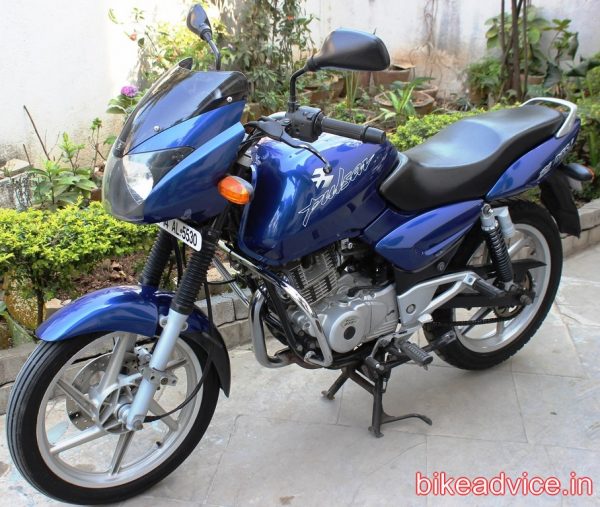 Well, I am trying to connect once again with all of you through this review of my 9 year old bike. Yes you heard it right 9 years!! You guys are right; it is pretty old for a review yeah? Well that’s exactly what came to my mind. But on the occasion of her 9th birthday I thought it would be a good idea to start off my first ever review of her.

About my bike, she’s a Blue Bajaj Pulsar DTSi (UG2 variant). What follows now is her picture post her 9th birthday on 6th Jan 2014. She has clocked 34.5k odd KMs since her last speedo replacement at 72k KMs. Trust me she is neither repainted nor even Photoshopped. That’s just pure hard work you see 😀 😉 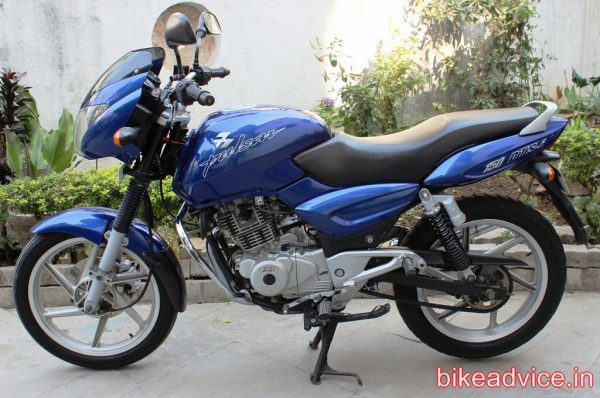 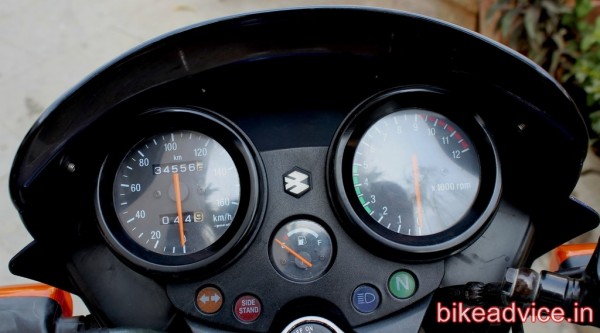 Clocked so far after speedo replacement

Let me tell you how I got her. Like most kids I had also paddled through in my school days and local trains played a major role during junior college. My future was possibly planned even before I had known who or what an engineer was. I looked for a college which was close to home so that I could save time on travelling.

Fortunately I found one too. So first year went by and those memories of paddling haunted me. Not like I paddled 20 KMs but 2 KMs also seemed like good 20KMs. It was only during the second year when all my paddler friends started revving in from our college gates. I was still a pillion rider then and always thought when would it be my turn to own one. 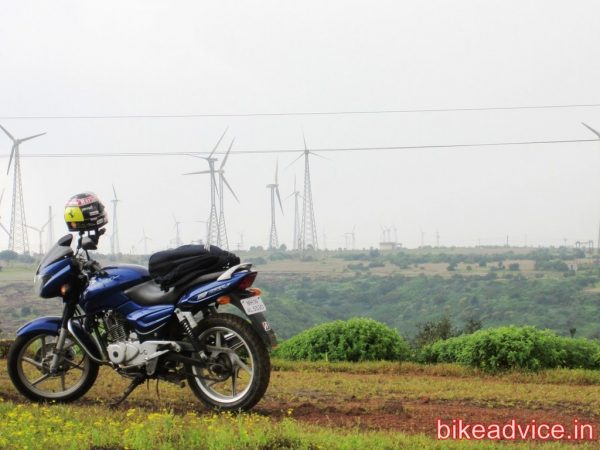 I used to drive their bikes; we used to roam around like we were glued to those rides forever. As time passed the urge of owning one strengthened, and so did my confidence to ask my parents. They said NO, I said WHY, they said ITS NOT SAFE, I said I WILL DRIVE TAKING ALL POSSIBLE SAFETY MEASURES THAT EXIST ON THIS PLANET EARTH, well they said NO NO NO and our conversation ended.

Well days passed and I cleared my 1st sem of 2nd yr with good grades. I was happy so were my parents, but my granny was more than happy, and how could I not take advantage of that :D.

Well I convinced her to convince my parents to get me a bike. Needless to say they agreed, provided I stick to my statement ‘I WILL DRIVE TAKING ALL POSSIBLE SAFETY MEASURES THAT EXIST ON THIS PLANET EARTH’. Next morning I read in the newspaper about a new Pulsar launched with alloy wheels and smaller fuel tank compared to existing one. Went to nearest Bajaj showroom, and there were 3 of them staring at me – RED, BLUE and SILVER. 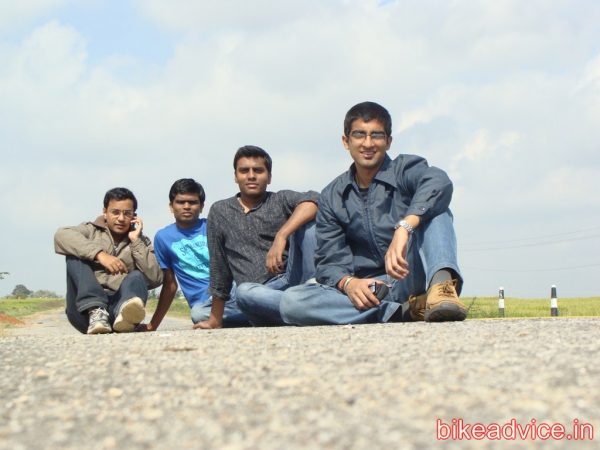 I was bowled over by the BLUE one. Had a test drive, riding position was good, so was the handling. Felt connected. Got the on road price and then called dad, neglected his advice of looking for other brands as well and booked the bike. I got the delivery on the same day itself, 6th Jan 2005 5pm, I was revving my very first bike, least interested about the details shared by the delivery guy. Once all the formalities were done I left the showroom and MY JOURNEY HAD STARTED, and you know what ITS STILL ON…

Many of my friends and family members thought that buying a Pulsar was a very hasty decision I had taken. But trust me guys, the CONNECT that I felt when I held those handlebars, looked at the speedo, revved the engine, my adrenaline started pumping, something that had never happened to me on any of my previous drives with my friends. That’s exactly what made me go for it. And I feel the same CONNECT even after 9 years.

Let’s talk about how she is for last 9 years of her service.

First 1000kms are pretty crucial for the bike’s engine. I was very well aware of that due to my friends, and took care that my heart did not control my mind for those 1000kms. Then was the time for the first free service of the bike. Showroom guys did their best of not doing anything except changing the engine oil. 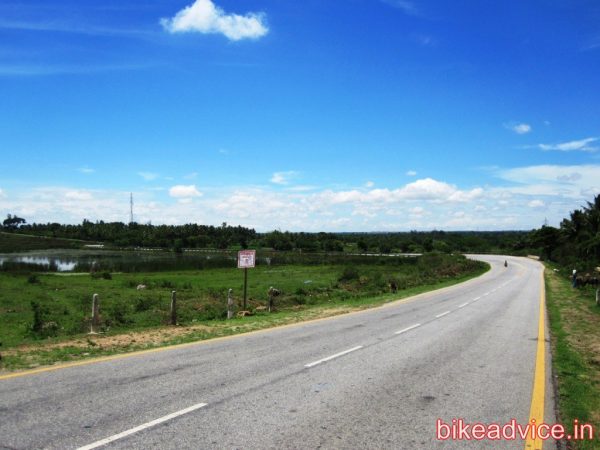 I had to argue with them on a number of things that I was not convinced with but they didn’t give any damn about it. I experienced similar behaviour when I went for “chain hitting the chain guard” problem. Got a usual reply of “this is the problem for all pulsars” I had made up my mind that no more service at the showroom after she is a year old.

Meanwhile I was enjoying every km that I clocked on this blue soul. Except for some bugs like the chain noise, hard gear shift, false neutral and narrow pillion seat. Along with the saree guard I removed the chain cover entirely and love the way she looked. Later through contacts I came across a friend who owned a two wheeler repair shop. He helped me get rid of that gear shift and false neutral issue. He even managed to provide me with a chain guard of Pulsar 220, which you can see in the picture.

I was extremely happy with the kind of service he provided. There was somebody who had viable solutions to my problem. I was a happy soul :). Since then, there was no looking back. If I had to get her serviced it was only him. He recommended that I use synthetic oil for the engine. My bike had clocked 5k till then. I switched over from normal mineral oil to semi synthetic oil from Shell.

After driving with it for almost 1k I replaced it by Motul’s fully synthetic engine oil. Later on they came with Motul Double Ester fully synthetic oil, which is what I am currently using. All of this this did make her heart pump smoother and healthier. I shared it with many of my friends but they did not agree until they drove my blue soul. The typical tappet noise in the engine that the pulsars are known for exists no more. Yes!!! They do not exist at all. Couple of my friends tried this with their bikes and were glad with the change.

It’s been a smooth ride since. I had been to number of places, on varying tarmacs in varying weather. But this baby dint let me down even once. What I have understood by then is – if you take good care of your bike (irrespective of whatever make it is), she surely is going to make you feel special every time you roll-out with her. Well followed now are the pictures depicting our travel to various places. For me it was the journey that mattered. 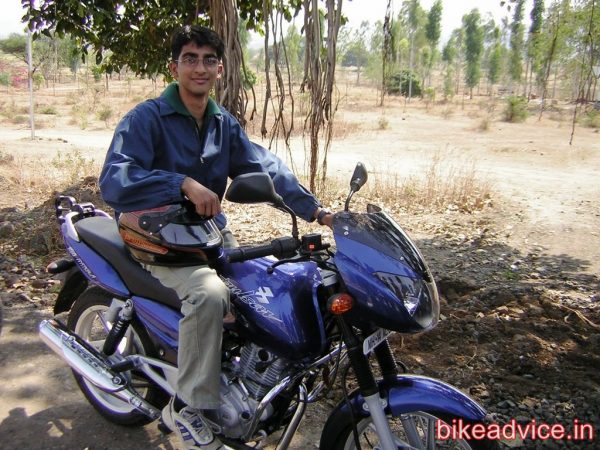 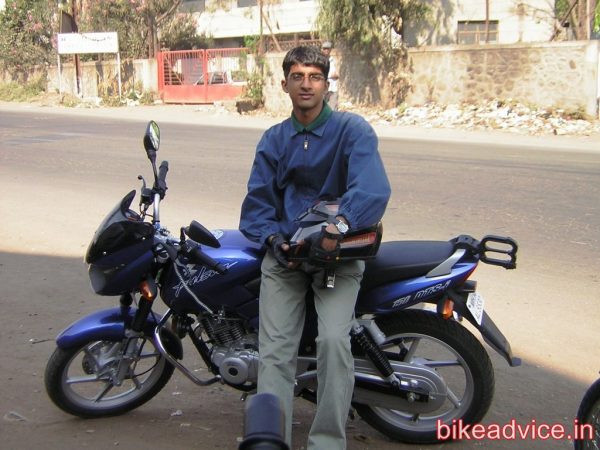 Yeah I was all set to get her rolling 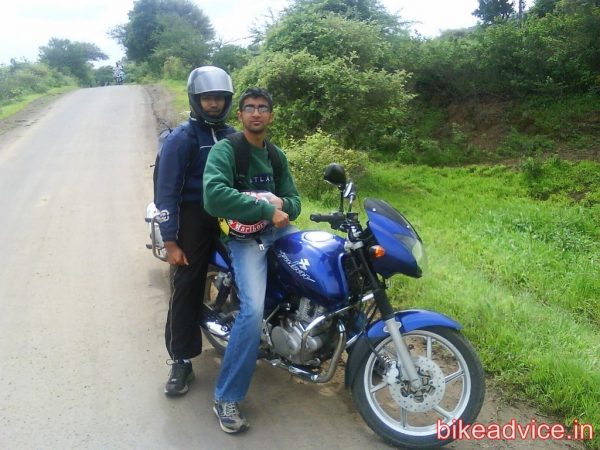 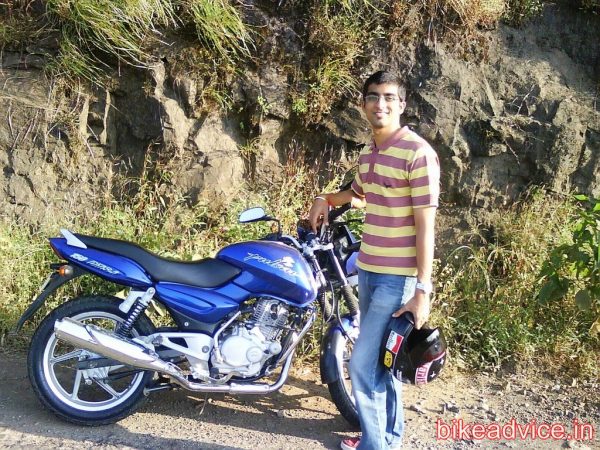 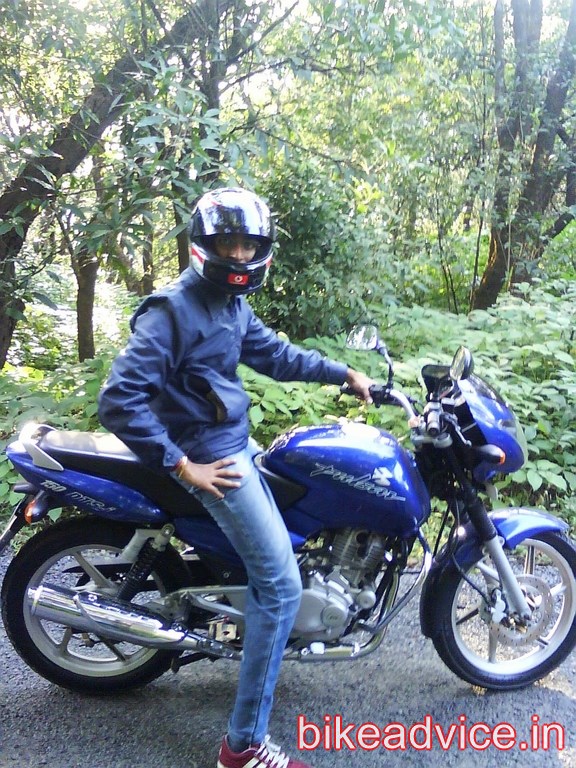 Once I was done with my engineering I got a job in Mumbai. Initially thought of keeping my blue soul at home in Pune. But later I started missing her real bad, though I used to see her every weekend on my return trip to Pune. Well then got her to Mumbai with me, there on till one more year our weekend trips to Pune were much more enjoyable than it had ever been for me. Pictures followed: 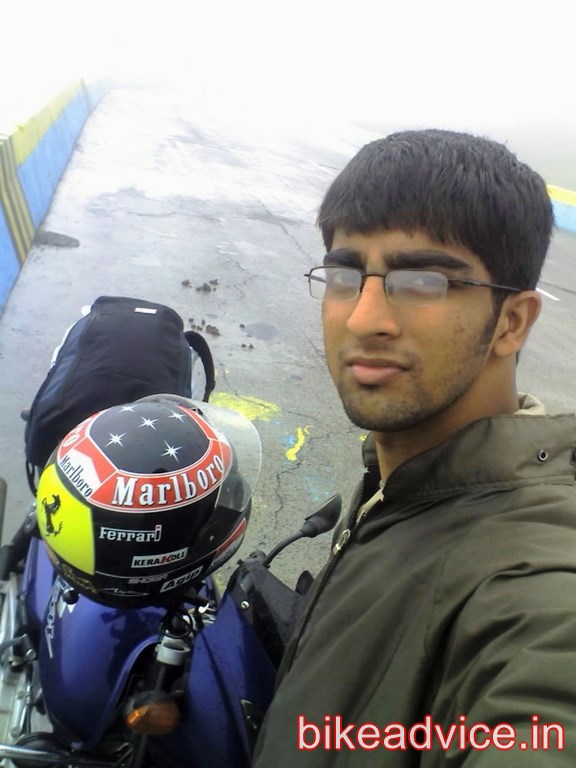 That’s a selfie at Amrutanjan bridge, while on my way to Mumbai. 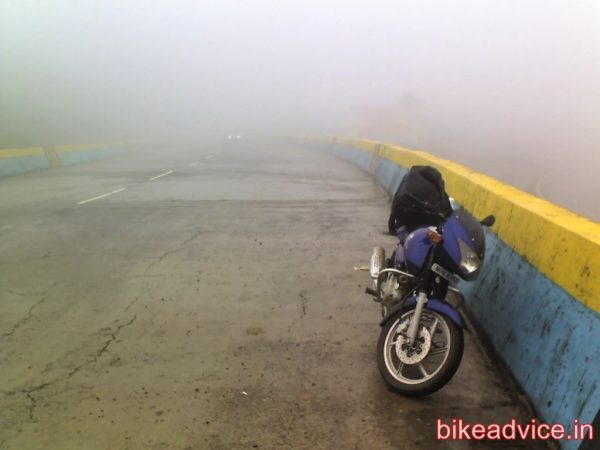 With the typical lonavla fog in background 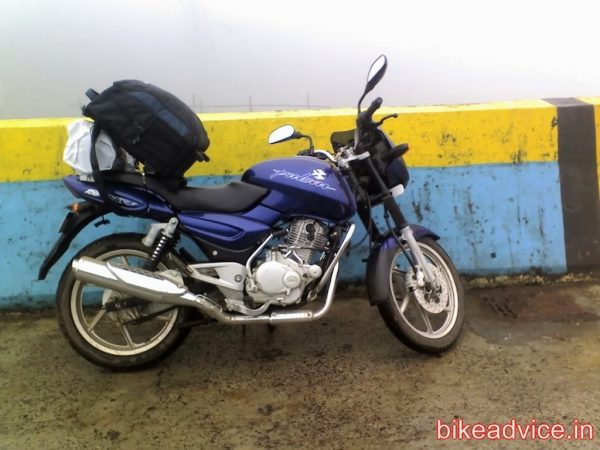 Now it’s time to share few things I like about her and few things that I don’t: 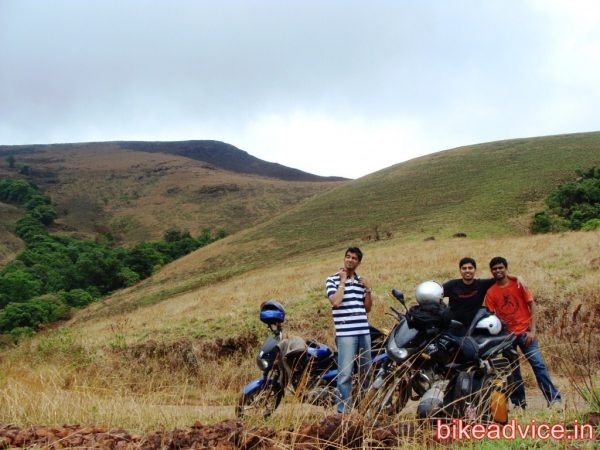 Top speed I have managed is 110 KMPH. After that hardly touched that mark on her ever as biking with smooth engine sound is what I like the most plus it keeps her less thirsty. Best ever fuel efficiency I managed was 56kmpl. 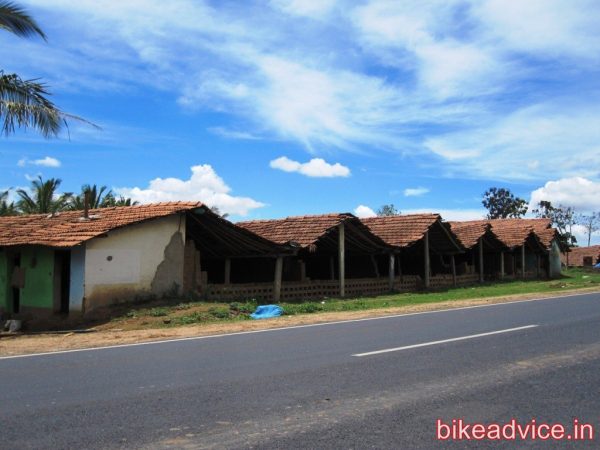 One thing is for sure; my neat and clean blue soul helps in changing people’s perspective that Pulsars don’t last long. They actually do last in great shape provided you take good care of them.

Now question is how do I keep it clean? I clean it once in a week, a regular wash with water and wax polishing once in a month (use Amway wax for the same). During rains I make sure she stays under shade when parked, be it office or at home.

Bottom line is whichever bike you own or are planning to own, make sure you take very good care of her, don’t take her for granted.

Keep revving guys and make sure you don’t just wear a helmet but strap it too, because wearing one without a strap is equally dangerous like not wearing one. Body parts are irreplaceable, protect it well to use it well….Ride Safe.