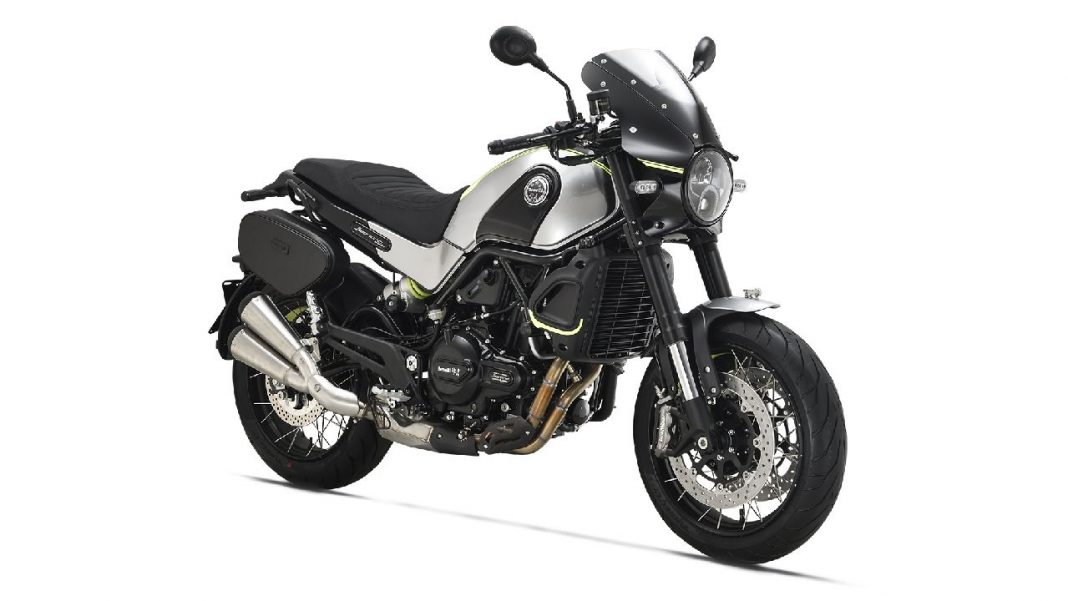 Leoncino Sport – the cafe racer version comes with many new bits. We discuss the differences as well as the similarities between these two siblings..

Compared to its standard variant the Leoncino 500, the new Sport model brings visible cosmetic changes. It comes with a clip-on handlebar which you won’t get on the regular model. The clip-on handles may make it slightly tough during narrow turnings. The rider has to take a wide-angle turn. That’s not a major hassle though.

Similarly, the LED headlight of the 500cc café racer Sport variant has a cowl covering it. Now, to get the pure naked cafe racer look one may remove it. The cowl is conjoined to the handlebar.

The Benelli Leoncino 500 Sport also gets a stylish dual-barrel exhaust that branches out from the dual header of the system.

It looks strikingly similar to the custom Akrapovic full system dual-exhaust that you would see on many popular cafe racer bikes. On the regular Leoncino 500, the dual header unites to one single exhaust outlet.

The new Leoncino Sport offers spoke wheels instead of its standard version that comes with alloy wheels. Also, to make the long rides on the Leoncino Sport comfortable, a medium-sized saddle bag has been fitted right below the grabrail on the right side.

The Leoncino 500 Sport packs the same 499cc liquid-cooled parallel twin engine and is mated with a 6-speed gearbox. At 5500 RPM it offers a maximum torque of 47 Nm along with a peak power output of 48.94 PS which is achieved at 8500 rpm.

There is barely a difference of 1 Nm and 1.5PS when we compare the power and torque output of the Sport variant with the standard one. However, Benelli Leoncino 500 Sport weighs 2Kg more than its standard sibling which may not be noticeable for most.

On the Leoncino Sport, Benelli has deployed the same 50mm USD Fork and the monoshock that the Standard variant carries. Dual-channel ABS is standard on all the variants of Leoncino. It utilizes Brembo calipers at the front with 320mm dual disc and a 260mm rotor at the rear.

The LCD meter console on the Sport variant is fully digital which is available on all the models of Benelli Leoncino. You get all the essential readings like the gear, RPM, temperature, ABS, Service, and battery output.

The seat for both the variants of the Benelli café racer is just the same at 785mm. The design is a bit quirky with the rear differentiating it from the classic café racers like Ducati Scrambler.

The seat has a sturdy grab-rail on the right-hand side which the pillion can hold on to while riding. The height of the seat is fair enough for the riders who are short.

Will Benelli Leoncino Come to India?

The Leoncino Sport does not feature in the list of BS6 models that Benelli will launch in India. But then it is a new entry into the portfolio, so, well, we can not be sure!

The standard Leoncino 500 BS6 variant is available in the country in two color options. Also, for cruiser and touring enthusiasts, the Benelli Imperiale 400 and the Benelli TRK 502/502X are also on sale in their respective BS6 avatars.

Besides, Benelli has confirmed the updated 302R for India which will rival the likes of Ninja 300 and BMW G310R.