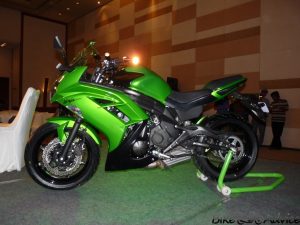 Bike enthusiasts have, of late, got many reasons to cheer. Bajaj offered them one when it launched the Ninja 650R back on June 08, 2011 at a mouth-watering price of 4.57 Lac ex-showroom Delhi.

Fast forward a year and a few more days, they are back and this time with the upgraded 2012 model of the Ninja 650R. The bike was supposed to be unveiled by Rajiv Bajaj, Managing Director of Bajaj Auto, however, due to some unforeseen circumstances he was not able to make it to the event, as we were told.

In his place, the bike was unveiled by Mr Amit Nandi, Vice President,Probiking, Bajaj Auto and Mr S. Ravikumar, Senior Vice President -Business Development Bajaj Auto. Amit Nandi presided over the function by giving an introduction and a little history of Ninja brand before finally taking the veils of the sparkling lime green colored Ninja 650.