The countdown that was put up in Bajaj India site for the launch of the bigger Ninja – The Kawasaki Ninja 650R was closed and the bike was unveiled on 8th June (yesterday) at the Akurdi plant in Pune. BikeAdvice was part of the media team that was invited for the launch. Here I give you the detailed report of the launch of this amazingly incredible machine. 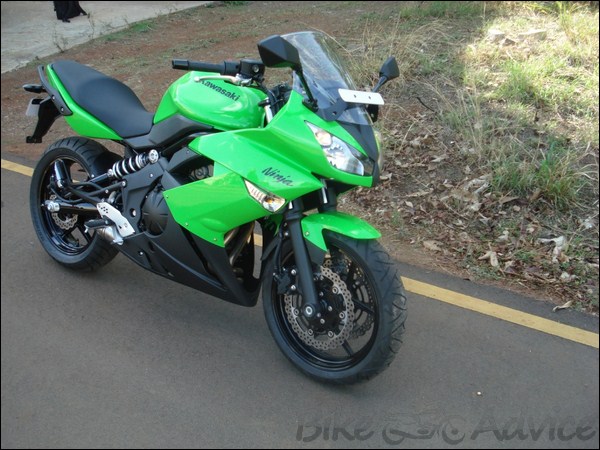 The official launching ceremony started by around 11 in the morning. It started with the video clips which explained Kawasaki’s wide range of business across the globe. For all those who think Kawasaki’s business is only in the field of motorbikes, here I throw more light on it. Kawasaki is a $14.2mn worth company for which only 19% of the revenue comes from the motorbike segment. Their areas of concentration includes Bullet trains, Commercial and Fighter aircrafts, Ship building, helicopters and a lot more.   A lot means really a lot.

Mr.Eric Vaas, President, New Projects, Bajaj Auto Ltd started with the inaugural note by explaining about the Bajaj Probiking concept. The whole concept of Bajaj Probiking was started seven years ago with the intention of not only providing world class products but also to creating the matching environment to be able to experience the product. He added that, “Probiking speaks the language of the premium segment motorcyclist.” According to him, till yesterday, Bajaj Probiking had three world class products namely Pulsar 220, Avenger 220 and the Ninja 250R. From today, adding to the portfolio is the all new Kawasaki Ninja 650R. He said, “All Probiking showrooms are situated at premium locations with world-class interiors and personnel combined with state of art service network.” Presently, there are 32 Probiking showrooms in 30 cities across the country. 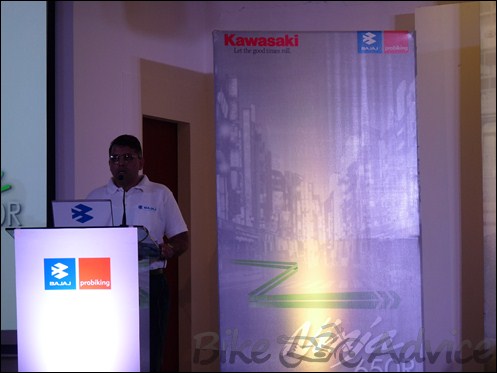 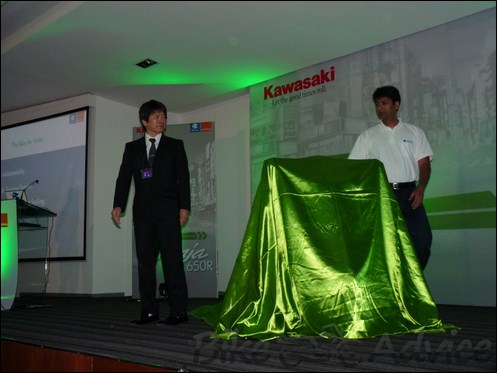 The green glossy curtain which was put on this much awaited bike and it was stripped to see the beauty under it. 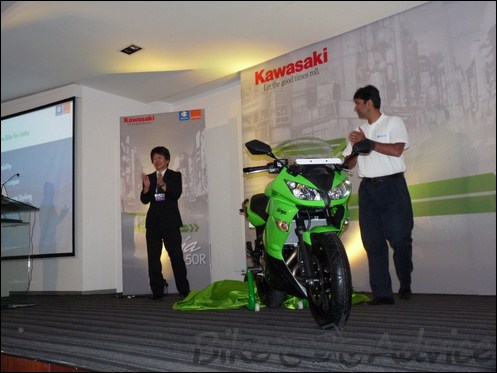 Oh wow, what a bike that was! It took as much as 15 minutes to for the entire media team to take their eyes off the bike and their cameras as well.

One has to notice the fact that Ninja has bikes ranging from 250cc to as much as 1400cc across the globe. Mr. Vass said that the reason for choosing Ninja 650R as the next bike from Kawasaki was due to the fact that there are as much as 26 offerings by various motorcycle brands at a price tag of more than INR 800000. But when it comes to the segment of bikes with a price tag bearing 300000-800000, there are only 6 offerings to the Indian customers and that is why 650R was chosen as the next bike. He also added, “We also wanted to be in the cubic capacity range of 600cc because that is what the bike enthusiasts’ across the country wanted.” 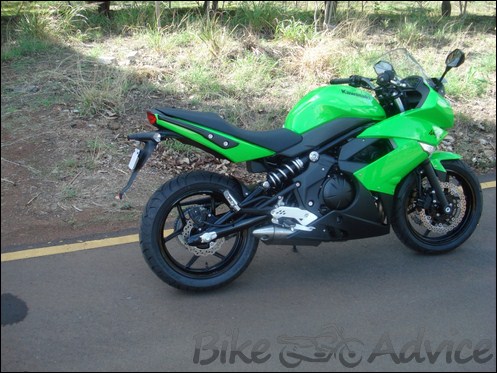 Following Mr. Vass, Mr. Yoshiro Segawa, Managing Director of India Kawasaki Motors was called on to the stage.  He said, “Many customers had raised expectations for a new model ever since the Ninja 250R was launched.” 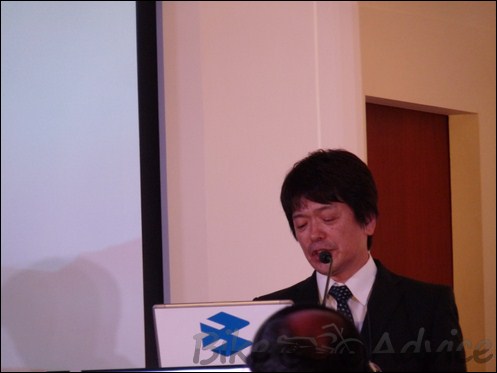 He added, “The Ninja 650R also has the fascination and spirit of all other Ninja bikes.”

Then at last stepped Mr. Bajaj on the stage. He said, “We were the last companies from India and Japan to make collaboration for scooters and motorcycles, but toady we are the only one.” He then added, “We hope to do more work with Kawasaki in the overseas.”  The following is an interesting note he made. “People often ask me the need to have a tie-up with Kawasaki when Bajaj has all the potentials in all the desired fields. I reply, ‘The day we make a motorcycle faster than Ninja, we will not need Kawasaki. But, unfortunately every year new Ninja and a faster Ninja comes to the market. ’

Guess what the price tag is!

Then finally it was the much awaited time;the time to declare the price of this bike. There was a minute of silence and Mr. Rajiv Bajaj declared the price. It was INR 457192 (Ex-showroom, New Delhi) and INR 4,57,915 (Ex-showroom, Pune). There was a wave of claps in the auditorium to see the bike being priced at a sub 5 lakh price tag. But, for our dear BikeAdvice readers, it might not be a shock as I’d already posted an article a week back wherein I’d mentioned the fact that Ninja 650R would be prices around 4.5 lakh, Ex-showroom.

Now let me begin discussing about the bike. This bike, like any other Ninja is eye-catching with its green paintjob. This is the first thing you would notice in the bike. 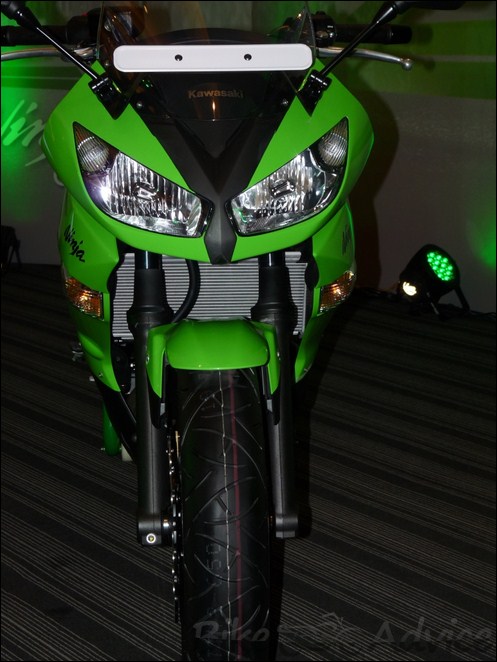 The twin headlamp with a big windscreen does not merely add the aesthetics of the bike, but also helps in efficient deflection of air. The triple petal disc brakes with dual 300mm discs on the front and a single 220mm rear disc is sure to provide the best of the braking experience for the riders. They look bold enough to attract the on-goers.

The bike is provided with a monocross suspension is 7 way adjustable and joins the frame with swingarm in the straight line, thereby enabling smooth adaptive settings ideal for all kind of rides. 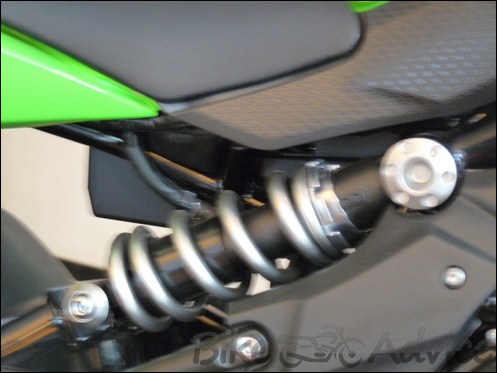 The battery in this bike is placed besides the suspension. The Kawasaki Ninja 650R boasts with an under slung exhaust, which is the first of the kind in India. It enhances the sporty look of the bike besides aiding mass centralization.

The riding position of the Ninja 650R is truly admirable. It is sure to provide a fatigue free riding experience to the user, in either case of being used in tracks as well as in highways. 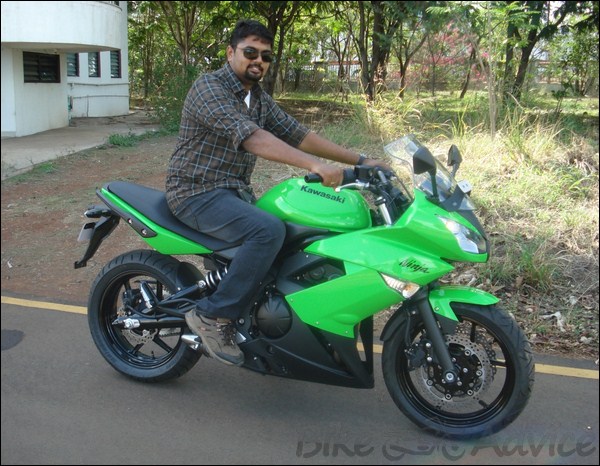 The engine is a compact and quick revving 649cc Parallel twin cylinder engine which is liquid cooled and Fuel Injected as well. The engine is capable of producing a max power of 72 PS @ 8500rpm and a max torque of 66 Nm @ 7000 rpm. This enables the bike to have the advantages of 200+ kmph speeds and availability of torque at all rpms.

There is an air duct provided towards the end of the windscreen which acts as a ‘Wind Curtain’ to reduce wind buffering at high speeds. This enhances the bike to have the best aerodynamic stability for the given shape. The Moto GP inspired instrument cluster comprises of fuel gauge, a set of 2 tripmeters, a clock, Odometer and a bar style digital tachometer which are pretty easy to notice even at high speeds.  The red backlight makes it ideal for night drives to check details, if any. 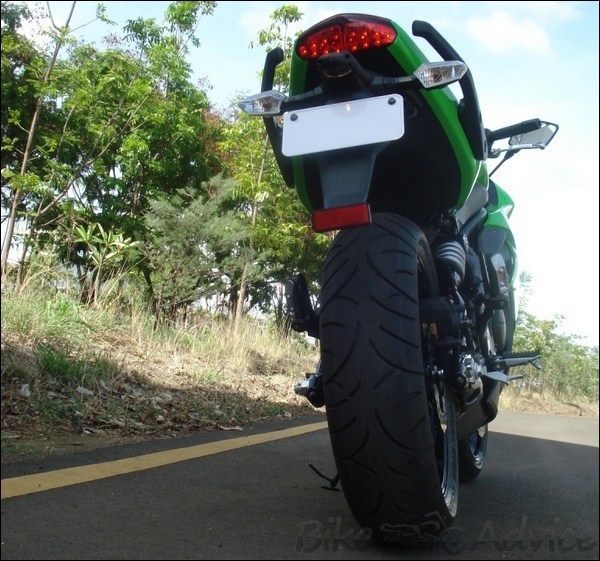 The sound of this machine has got the real ability to make anyone envy you. What sound it produces at higher rpms. Ooof. I can still hear it.

According to Bajaj India Limited, this bike is ideal for the Indian market owing to 3 reasons viz Sports Adaptability, Power & Serious Torque and Aggressive Supersport Styling. My personal opinion is that Ninja 650R would score great in all these factors more than any other bike in India.

Mr.Bajaj said that it is Yoshiro Segawa who should answer all your question because Bajaj is only the distributor of Kawasaki in India.

Mr. Yoshiro Segawa replied with the help of his translator, “The purpose is to establish the presence of Kawasaki as w premium sportbike model.”

2. With so much of competition against the recently launched Hyosung GT650, how did you manage to price the bike so low?

He answered, “We discussed with the Japanese engineers and worked on controlling the price.”

3. What are the next Ninja models coming to India?

“We are proud to introduce this model. We’ll introduce the next model which will match up the expectations of the customers. But, it cannot be opened up at this point of time.”

“We want to get step by step into the market in this country. Also, beginning with the Ninja 250R, this is the next advanced model.” “Also price was another reason and also a survey report said 650R.”

Mr. Eric replied for this question, “In this segment, HD is the only brand selling 20 units per months mostly the SuperLow priced at 5.5 lakhs. We expect the Ninja 650R to double or even triple from the current 20 units per month.”

6. How profitable is this segment?

“We don’t provide segment vice break up of our sales. The largest player in the premium bike segment, the Ninja 250R sells more than 50% of the other bikes in this segment. This is certainly profitable”, Mr. Eric replied.

7. About the alliance with Kawasaki?

Mr. Bajaj replied, “We will continue to bring more bikes from Kawasaki…………. In the overseas market, Philippines is successful in terms of tie ups with Kawasaki.  In Philippines, Bajaj-Kawasaki is the leader in bike segment. We are both actively thinking if it is possible to take the same to the other countries as well. If anything is good for Kawasaki, it is good for us.”

8. Are there any plans to increase the probiking showrooms in India?

“Yes, we would like to expand with demand in the market. As of now, 30 is fine for the next 3 months.”

Mr. Eric answered, “We would tell a waiting period of 90 days but will be delivered before that.”

10. Has the tsunami in Japan affected the production?

The Ninja 650R will be made available in India only in the conventional color of Ninja which is the Lime Green. This model, I would say is an amazing Sport Tourer. With it’s perfectly ergonomics and the awesome tyres blended with triple disc barking effect, it has got the ability to cruise at high speeds and of course offering you the best comfort level ever made available in a two wheeler in the sub-continent. 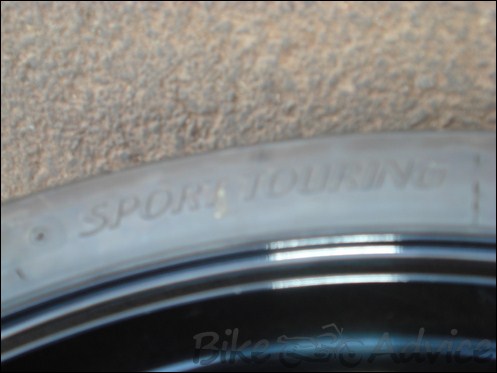 Undoubtedly, this machine is better than the other Korean counterparts available presently in the country. Priced perfectly for the Indian hardcore bike enthusiasts, we wish Kawasaki all success in bringing more and powerful Ninjas into the country.

Pictures shot by Saad Khan and Naren. Content by Naren.