All these days, when I report any news about the KTM, I’d to come up with an exclusive paragraph which would act as an intro about the maker. The launch of Duke 200 in India has reduced this work for me and from now on, I can start talking to the point precisely. Basically, it’s a sigh of relief! 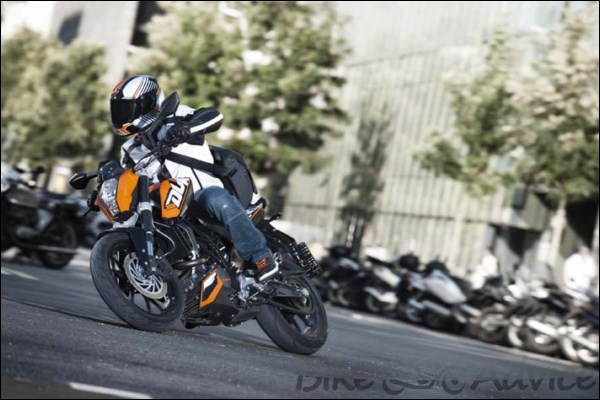 Though, the brand is Austrian by nationality, Bajaj Auto owns nearly 40 per cent stake in the company which enables it to make use of the technology and the basic platform on which the KTMs are built. Its effect was pretty much felt in the recently launched Pulsar 200NS, which is the first naked street bike ever in the history of Bajaj Auto.

Initially, there was high speculation among Indian bike enthusiasts that the Duke125 will be the first KTM to hit the Indian roads. But then KTM announced a little later that it’s not this bike, but the Duke200 which will be the first product for India. The brand deals with bikes in almost all categories and has marked its presence effectively across Geographies.

When I reviewed the KTM 125Duke in Singapore about 6 months back, I clearly felt that if it is launched in the market, it’ll be positioned as a premium brand owing to its refinement in the entire quality and the price tag it’ll most probably be bearing with itself at the time of its entry into the sub – continent.

If you can look at the price of the KTM Duke200 which was recently launched in the capital city, the price difference between this and its rival – Pulsar 200NS is close to quarter a lakh of INR. As on date, these are the only options available in the 200cc category for young bikers out here.

The company doesn’t seem to work on reducing this gap in pricing, as it is trying to position itself as a Premium brand in India. In a way it is good because quality counts more and there are no two words on that at any point of time.

Here is what the press release of KTM says about its recent foray into the Indian market.

‘India, with around 12 million motorcycles sold in 2011, is the world’s biggest market for two – wheelers. An increase in growth of 15% on this figure is expected in 2012. Bajaj, KTM’s partner in India, is the second biggest manufacturer in this market with a share of 20% and offers an optimal sales structure for KTM motorcycles through its dealer network.

The 125 Duke was already successfully introduced onto the European market in the first half of last year as a result of a development project with Baja. The next step has now followed. KTM CEO Stefan Pierer and Bajaj CEO Rajiv Bajaj officially unveiled the new 200 Duke to the media in New Delhi on January 24, 2012. With this motorcycle, KTM enters the Indian market with Bajaj for the first time and expects sales of around 20,000 bikes.’

Stefan Pierer, Chief Executive Officer, KTM said, “34 flagship stores will be exclusively available to KTM in a first step. Six more will open in 2012. With an additional 40 service partners, KTM is to be anchored into the Indian market as a premium brand.”

The company will also be launching its bigger variants of its flagship product – Duke in the years to come. In the pipeline, we’ve the Duke 350 and a much bigger Duke 690 waiting which are few of the best – sellers in most of the markets where is operates.

With such efficient and effective products in the pipeline, it is indeed pretty obvious that a company like KTM will have to be branded as a Premium Brand and that is what the owners of these machines would also prefer!